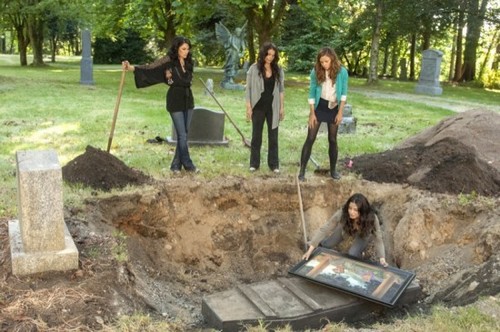 Tonight on Lifetime, WITCHES OF EAST END continues with another new episode.  The show is inspired by Melissa de la Cruz’s New York Times best-selling novel, Witches of East End, and centers around the mysterious Beauchamp family.  On tonight’s show, called “Marilyn Fenwick, R.I.P.,” Dash and Killian have a tense reunion.  Did you watch last week’s premiere episode?  We did and we recapped it right here for you.

On tonight’s episode, Ingrid discovers mysterious and dangerous family heirlooms that she uses to resurrect her Aunt Wendy. Together, they race to save Freya from Doug, her jilted ex-boyfriend from another lifetime. Joanna is jailed and questioned by the police regarding her murder charge. Dash and Killian have a tense reunion.

Tonight’s series premiere is going to be great and you won’t want to miss it. So be sure to tune in for our live coverage of Lifetime’s Witches of East End Season Premiere tonight at 10PM EST! Remember also to bookmark Celeb Dirty Laundry and check back here for our live Drop Dead Diva recaps, reviews, news, and spoilers!

Ingrid opens up her mother’s secret cabinet and locates the family heirlooms that will supposedly help uncover the secrets of her past. She finds a chest that opens when she says “open.” In it are magical texts, photos of their past, and a grimoire. She looks for a spell to save Freya. Meanwhile, Freya is trapped in the photograph and being pursued by the individual she trapped in one of her past lives.

Joanna is being questioned by Detective Noble. He draws the symbol (the one at the crime scene last episode) and he asks her if it’s familiar to him. She says no and asks for a cigarette.

Meanwhile, Ingrid locates a resurrection spell — which she’s probably going to use to try to resurrect her aunt.

Noble brings Joanna a cigarette, and she begins chanting under her breath. Ingrid manages to bring Wendy back from the dead — but she says that she would’ve just come back soon anyway. Wendy says a spell like that comes with a price — you bring back someone you love and someone you love has to take their place.

Meanwhile, in the picture, the man and Freya continue to fight. He’s about to burn her in the painting world.

Killian and Dash have a fight — while playing pool. Wendy and Ingrid go to rescue Freya, and Wendy enlightens Ingrid about the curses the women in their family have on them.

A special lawyer named Harrison comes to Joanna’s aid. He says that he might not be able to stop a vicious psychopath who wants her killed, but he might be able to get her out of the police station.

Freya is in a burning room, and she’s lifted up by Killian — or at least she thinks it’s Killian, but then she sees Dash. He wonders what was happening, and why she was in the middle of a fire in the bathroom.

Ingrid tells Freya that they’re witches, and she tells them about their curse. They get a message from Joanna’s lawyer, and Joanna says that they can find enough bail money with their Aunt Marilyn.

Killian and Dash continue their reunion; Dash offers Killian a check  and a warning to get out of town. But Killian says he just got in and he kind of likes it. Dash wants him gone because he feels as if he’s a threat to his relationship with Freya.

Freya, Ingrid, and Wendy uncover “Marilyn.” We learn that Joanna created a fake person — along with a fake grave. So she could bury money inside. They uncover the grave, find the coffin, open it, and find the money they need to bail Joanna out of jail. Meanwhile, the shapeshifter — posing as Joanna — watches their success from afar and grows furious.

Aunt Wendy says that Joanna is amazingly powerful. Joanna says that she has many enemies, and now that they know they’re witches they CAN’T tell anyone. Freya gets mad over the fact that she was deprived of the truth.

Killian is resting on his boat. Freya visits Killian; she says right now she just wants to wallow and feel sad and feel messed up — and she doesn’t want to go to Dash because he’ll just “make everything better.” They both say that they shouldn’t be together, hanging out, but they continues to do so anyway.

Meanwhile, Ingrid tries to find a way to undo the price of her “bringing back the dead” spell. Sitting at the table, they realize that maybe Doug could’ve escaped the painting at the bar — so they quickly run out and look for him.

Freya returns to an empty house. She eats a cookie and notices a drip coming from the ceiling. She goes upstairs. The bathtub is spilling over. Doug is there and he sneaks up behind her. He shoves her in the bathtub and tries to drown her.

Wendy, Joanna, and Ingrid return home. They save Freya by locking Doug into another painting. They bury the painting. They hug. When they get home, Dash is waiting for them on the porch. Freya says it’s a long crazy story and it’s probably better if he doesn’t ask.

Ingrid continues to look through her family’s spell book. Joanna deals her tarot cards. She keeps dealing the same fate. Joanna says the girls have never lived this long before and she can’t bear to lose them again.

The shifter is watching their house from the street. She pricks her finger and etches the creepy symbol into a tree trunk; the tree immediately dies.