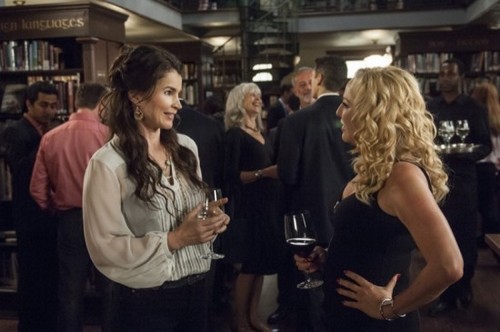 Tonight on Lifetime, WITCHES OF EAST END continues with another new episode.  On tonight’s show, called “Unburied,”  Joanna reads Freya’s tarot cards.  Did you watch last week’s premiere episode?  We did and we recapped it right here for you.

On last week’s episode Freya made a startling discovery at Fair Haven.  Freya struggled to understand her sister.  She found the source of Ingrid’s strangeness – magically poisoned brownies.  Ingrid had flashbacks to one of her past lives.

On tonight’s show, The shifter summons a familiar face. Ingrid discovers something startling from her past. A novelist comes to East End to research his new book. Wendy turns over a new leaf and attempts to get serious with Leo (Freddie Prinze, Jr.).

Wendy is trapped in a chair, which is bound within a magic circle. Ingrid is torturing her.

Killian shows up at the bar to help Freya stock the shelves. Killian says it’s so hot in there; they bump into each other and begin kissing. Freya immediately wakes up in bed with Dash. Woops. Dash wonders what she was dreaming about, but Freya says that she never remembers her dreams. Ha, yeah right.

Back at home, Freya flips through the family spell book looking for a spell that will help her stop sleep-talking. Freya finally confesses to Ingrid that she kissed Killian at her engagement party.

Wendy comes home. As soon as she arrives, Ingrid runs up the stairs.

A stuck-up man comes into the library; he demands that Ingrid find these books and she goes off on him. At the bar, Freya tries to talk Killian into getting a haircut — because she needs some of his hair to perform the dream-control spell. Killian says it’s hot in here, and parts of the conversation strike Freya — she remembers them from her dream.

Dr. Amy comes in for Killian (they’re sort of dating now). Freya collects some of the hair from Killian’s head and puts it in the potion she made. She drinks it.

Ingrid finally starts to piece together that her and Freya always die young, around now. Joanna says that she shouldn’t worry about that and to only worry about living her life to the fullest.

Someone who looks like Joanna (the shifter) walks into the graveyard. She finds Ingrid’s grave. She spreads a mystical, foglike potion over the grave. After she performs the incantation, a corpse reaches out of the soil; it looks like Ingrid.

The person who looks like Joanna reveals herself to Corpse Ingrid. It’s Dash’s mom. She says to Ingrid, “I’m not your mother. You knew me as Athena.”

Back at home, Wendy says, “Ingrid is ignoring me and Freya wants me to read her cards.” Wendy is seeking advice from Joanna, but Joanna says that she’s not sure what’s right any more.

In the graveyard, Athena convinces Fake Ingrid to get something from her aunt Wendy. Athena needs a key that once belonged to her father, Archibald. Athena says that if she obtains this prized possession that she’ll allow her to kill Wendy and exact her revenge.

There’s a big event at the library, which is being thrown by Dash’s mother. At the party, Dash invites Freya to go to London with him.

Leo hooked up with Wendy. He notices her strange necklace.

At the library, someone hits on Ingrid. The Rude Man she ran into earlier saves her from the man’s cruel advances.

Fake Ingrid shows up at Leo’s house. She comes for Wendy and convinces her that Joanna has been attacked by the shapeshifter. Wendy begins to piece together that this isn’t the real Ingrid — because nobody knows about Leo and how did she know she was there? Ingrid uses a spell and knocks Wendy down the stairs.

We’re back in the same room we saw Wendy in at the beginning of the episode. Fake Ingrid says that she wants the Serpent Clavum. Wendy says she doesn’t have it, that she got rid of it ages ago.

The Real Ingrid runs into Mike, the man who saved her from the weird man at the library. She thanks him for intervening. When she leaves him, we see him look at a map of Fairhaven Estate.

At the bar, Dash comes in and PUNCHES Killian in the face.

Leo arrives at Joanna’s. He’s worried about Wendy, who left abruptly. Leo tells him the story about how hasty she left. When Leo leaves, Joanna pulls out a map and searches for Wendy magically. “C’mon, find the necklace.” Joanna seems to be drawing on the energy of Wendy’s strange necklace she wears around her neck.

Back at the torture session, Ingrid says that she’s going to kill Wendy. She sticks her hand through Wendy’s chest and grabs her heart (but doesn’t pull it out). Joanna arrives. Ingrid notices Joanna and is startled, surprised to see the mother whom she still loves.

Joanna kills the fake Ingrid. She takes Wendy back to the house.

Freya comes in distraught, saying that Dash hates her now, but Joanna reassures her. Maybe it’s good that he’s going away to London by himself — it’ll only give him some alone time to remember how much he loves her.

While sleeping, Freya seems to be taking control of her Killian dream. She shoves him out.

Downstairs, Joanna is reading Freya’s Tarot Cards. She says that she made a promise never to deal the deck for her daughters. She reveals: You will love them both. One man is your soulmate. One man is your destroyer. Whoever you choose will decide your fate.

Wendy comes into talk to Joanna. Wendy says she still doesn’t know who the shifter is, but she knows what it wants: The Serpent’s Clavum. Joanna’s certain that the key was destroyed and that the portal can never be opened — at least that’s what she tells Wendy. Meanwhile, Wendy’s necklace turns red, which means she’s on her last life.

Athena talks to her father’s portrait. She says she needs more power.

Before the episode ends, Joanna walks into the backyard and recovers the Serpent’s Clavum, the golden snake key. She’s relieved that it’s still there — but she’s worried about what this means for everyone’s futures.