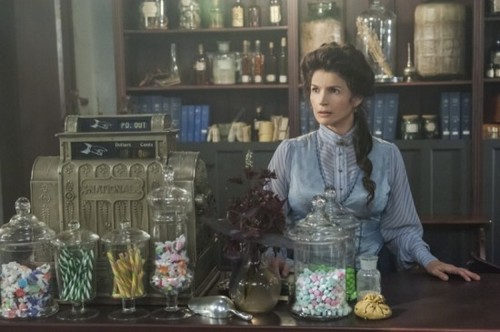 Tonight on Lifetime, WITCHES OF EAST END continues with another new episode.  On tonight’s show, called “Potentia Noctis,”  Ingrid has flashbacks to one of her past lives.  Did you watch last week’s premiere episode?  We did and we recapped it right here for you.

On last week’s episode Ingrid found a unique way to mourn for Adam. Joanna and Harrison took their friendship to the next level. Freya met Dash’s ex fiancée Elyse when she returned to deal with some unfinished business.

On tonight’s show Freya makes a startling discovery at Fair Haven.  Freya struggles to understand her sister.  She finds the source of Ingrid’s strangeness – magically poisoned brownies.  Ingrid has flashbacks to one of her past lives.

The show opens with Freya swimming in the pool. She’s swimming back stroke and runs into Killian. Dash comes in and says that, after his electrical shock last week, he’d like for Killian to come in the hospital so he can check him out. Dash seems to want to try to reconnect with Killian.

Penelope, Dash’s mom, comes into the library. She brings in a photograph to show Ingrid; in the photograph there’s a woman that looks exactly like Ingrid — because it is Ingrid.

Back at home, Ingrid talks with Joanna about the photograph. She’s concerned people will find out her secret, but she’s even more concerned about the fact that she knows absolutely nothing about her previous lives. She wonders why she was hanging out at Fair Haven — she wonders if she knew Archibald Browning, the rumored cult leader and alleged Satanist.

Wendy and Joanna are hesitant to reveal the stories of Ingrid’s past. Joanna says she doesn’t want her to be carried down by all the baggage of her past mistakes. Wendy says they should just tell her the truth, but Joanna says, “If we tell her, you could risk losing her. You really want to do that?”

Killian and Dash meet up at the hospital. One of Dash’s colleagues come in with news about the mass that he pulled out of Maura Thatcher’s throat.

Ingrid makes some magical brownies to help her remember her past life with Archibald Browning. At first they don’t seem to work, but then they do, and she has a powerful flashback.

Dash and Amy begin to study the weird mass further, and they continue to be puzzled by everything. Fraya steals the sample when nobody’s looking.

We have another flashback . . . . Joanna, Ingrid, and Wendy own an herb shop. Archibald comes in looking for a rare and dangerous herb; they tell him they don’t have it. He’s a dark warlock and invites him to Fair Haven; he says that that place is the “next level of being for our kind.”

Meanwhile, back in the current time, Freya comes in holding the sample she stole from the hospital. She asks Wendy if she should be worried about this. Wendy freaks out and throws (with magic) the thing into the fire. She says that’s “Branch of Death. You touch it. You die.” Wendy shoves Freya’s hand under the running water and vigorously tries to scrub away whatever it is she’s gotten all over her hand.

Freya and Wendy begin working on a potion that will supposedly cure the sickness from the bodies of whomever touched the cursed plant. Wendy has Freya make it because she has a gift with potions.

We are taken back into Ingrid’s flashback . . . . A little girl sits on Archibald’s lap; he reads her a story. Ingrid comes in and greets Athena. Ingrid comes in and Archibald says that she was very convincing earlier. She’s brought the dangerous herb. Ingrid and him are lovers. They work some dangerous magic and turn an old woman into a young woman; they begin for a ritual later that night.

Back in the current time, Freya prepares the antidote for Amy and Dash and herself. They drink at the bar. Killian is the “designated driver” so he doesn’t get one. Dash, in a strange turn of fate, asks Freya to marry him immediately.

Back in the flashback . . . . Archibald and Ingrid are making out. He says we need to join the others in the pool. We learn that Ingrid and Archibald are set to marry and, also, that they have a strange agenda. Elizabeth, the girl they changed into a young woman, dies a strange death. Elizabeth’s brother comes running in asking for his sister, but Archibald says that she’s not there. Archibald asks Ingrid to kill the man, but she hesitates. Archibald snaps the man’s neck with just a turn of his fingers. ‘You disappoint me, Ingrid,” Archibald says.

Freya, Killian, Dash, and Amy all enter the pool area. Everyone’s ears are ringing, which means Freya’s potion worked. Amy says that this place is creepy, and Killian says, “That’s because they used to have Satanic rituals here.” Dash says that they recently found a set of catacombs beneath the land. Killian says that they should go check it out.

Meanwhile, we enter Ingrid’s flashback . . . . We’re taken back to the Beuchamp Apothecary. Ingrid runs in there getting supplies. Wendy tries to persuade Ingrid not to marry Archibald — that he doesn’t really love her and never will.

We’re taken back to present time. They’re exploring the catacombs. Freya and Killian talk in the catacombs. They wonder why both of them had dreams about each other prior to meeting each other.

Freya explores the catacombs; she has a flashlight. She runs into a tree of the Branch of Death.

Back in flashback . . . . Wendy says that she can’t let her go. Archibald comes in. Wendy stands in between them. Archibald tells Ingrid to kill her. Wendy gathers a hug amount of energy and throws it at Archibald. Ingrid jumps in front of the curse, and it knocks her off the balcony. She dies upon landing on the floor.

Ingrid wakes up from the flashback, now realizing that her aunt killed her in a past life. Joanna comes in to comfort her.

In the flashback, we see Joanna kill Archibald. To kill him, Joanna cuts the back of his daughter, Athena, and then stabs Archibald. Joanna is mad at Wendy for being reckless and throws her out of her life.

Freya storms in saying that there’s an entire wall of the dangerous plant in the catacombs. Dash finds it before they do; he picks one off the tree.

At the end of the episode, Freya and Dash tell Penelope that they will not be eloping. As Penelope hugs Freya, we see a giant scar on her back — made by a knife. Penelope is actually Athena, the daughter of Archibald Browning. She says that she has “big plans for both her and her family.”

Yikes. I always knew Penelope had it out for Freya and her family — but what an interesting twist!