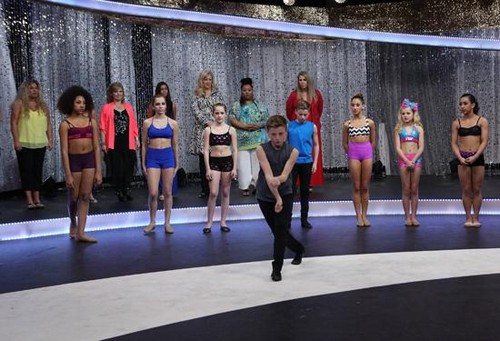 Tonight on Lifetime Abby’s Ultimate Dance Competition returns with another new episode called, “Wild West Showdown.” On this week’s show a dancer finally gets the solo her mother has demanded, but will it be her downfall?  Did you watch last week’s season 2 episode 7?  We did and we recapped it right here for you.

On last week’s show the reward for the challenge last week was a private lesson with Abby Lee Miller herself, which some of the kids desperately wanted to win… while others would do ANYTHING not to. The pressure of the competition had the moms harping on their children and one mom even sold out her own kid to the judges for not working hard enough.

On tonight’s show it’s “Wild West” week and the dancers face off in Abby’s O.K. Corral. Animosity toward one dancer is building and her mom goes all-out to defend her. Another dancer finally gets the solo her mother has demanded, but will it be her downfall? Her arch-nemesis certainly hopes it will and doesn’t hesitate to say so.

Tonight’s episode is going to be a drama packed one, which you won’t want to miss. So be sure to tune in for live coverage of Lifetime’s Abby’s Ultimate Dance Competition Season 2 episode 8 — tonight at 9PM EST.

Trinity and Jojo have a duet with each other this week, Abby appears out of no where to see how the two of them are doing with their choreography. Kalani is going to be having a solo this time, she’s going to prove that she can jump high. Gianna is going to be having a solo of her own now, and it could be because of how her mom complained last week at the eliminations. Abby appears to see how Giana is doing, and she wants to see Giana put more strength in her back leg. McKaylee and Travis are going to be a duet together. Jojo’s mom asks Cindy why she’s been talking about Jojo negatively, they’re completely not the greatest of friends.

The contestants are warming up for their performances tonight, Jojo is speaking to her mother; her mother talks shit about Cindy to her and how she wants Gianna and Cindy to go home. Gianna is talking to her mother about how she can easily hear Jojo and her mom speaking ill about her. It all comes down to Jojo and Gianna to give a performance that will blow each other away. Abby, Rachele and Richy make it to their judging panel. Abby wants to see someone who can jump really high and have great air. Jojo and Trinity are first to perform their duet, they both begin to perform on stage. Right at the end of the performance the ribbons tangled up, Richy wanted more from Jojo in this performance; Rachele mentions how her timing was a little off and the switch lift was off. Abby mentions how she warned Jojo about the ribbon getting caught, and it could have ruined the whole dance.

Kalani is going on stage to perform her solo, and she gives a great performance; Richy even throws in the finger wave. Rachele was amazed by it all, Richy even thought it was amazing also; Abby was very impressed with her. Travis and McKaylee are going to go perform their duet. Richy gives two finger waves, Rachele was impressed with McKaylee tonight, Abby was also impressed with how she hit it hard. Richy mentions how there was a lot of performance, Richy thought Travis hit it harder. Richy also mentions that Travis’s Hip-Hop has improved; Abby brings up that Travis didn’t jump high enough to compete with McKaylee. Giana is now going to be doing her solo, Richy believed that he needed more star power from Gianna, Rachelle disagrees and believes that Giana was feeling something in that performance; Abby appreciates the perfect switch split. Though Abby didn’t like like the color of the shoes, it made her feet too noticeable.

Abby and the other judges are talking about who they’re deciding to put into the bottom three, Richy doesn’t believe that Giana had Giana star power; Abby didn’t believe that Travis was good because he couldn’t jump high enough, but Abby disagrees with him completely. The contestants walk onto the stage along with their mothers, Jojo is relying on Tina saving her from the bottom three. Trinity is safe, Kalani is safe and McKaylee is safe. Travis, Jojo and Gianna are in the bottom three. Tina and Trinity have the decision to save a competitor, they talk about it together. Tina decides to save Gianna from the bottom three, leaving Travis and Jojo in the bottom two. Travis is thrown out of the competition, and Jojo is staying. Travis says goodbye and had a whole lot of fun in this competition.