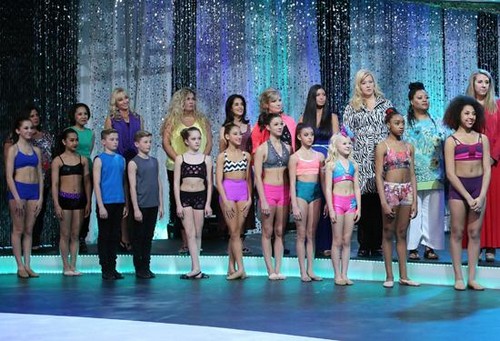 Tonight on Lifetime Abby’s Ultimate Dance Competition returns with another new episode called, “Fairytales Come to Life.” On this week’s show will Abby be the dancer’s fairy godmother…or evil stepmother? Did you watch last week’s season 2 episode 7?  We did and we recapped it right here for you.

On last week’s show Judge Rachelle Rak, a veteran of “The Great White Way,” led the challenge for the “Broadway” themed week and blew the kids and moms away with her sassy moves. The challenge winner’s mom earned the animosity of the others by bragging about her child. The pressure was on for the dancer who chose the first solo of the season…will they triumph.

On tonight’s show the reward for the challenge this week is a private lesson with Abby Lee Miller herself, which some of the kids desperately wants to win… while others would do ANYTHING not to. The pressure of the competition has the moms harping on their children and one mom even sells out her own kid to the judges for not working hard enough. Will Abby be the dancer’s fairy godmother…or evil stepmother?

Tonight’s episode is going to be a drama packed one, which you won’t want to miss. So be sure to tune in for live coverage of Lifetime’s Abby’s Ultimate Dance Competition Season 2 episode 7 — tonight at 9PM EST.

RECAP: Travis feels a little weird being in the competition without his brother Tyler, Abby appears and announces the theme which is modernized fairy tales. Abby explains how magical Fairy Tales are magical and are important, she points out Travis being there. Abby wants Travis to work very hard to become her prince charming, the new challenge will be rewarded with a private lesson by Abby. Gianna’s mother is being annoying and a bitch in general. Abby brings a guest named Lezlie who specializes in turning, she wants to give them a choreography that’ll put their turning to the test. Ally is not confident with turns, because she’s behind when it comes to ballet. Ally leaves the challenge first, Trinity is the next one out, Jojo messed up and almost fell off the stage, she’s thrown out of the challenge. Gianna is thrown out next because she missed part of the choreography. McKaylee didn’t hit second and ended up being thrown out. Kalani ends up winning the challenge with Travis being in second place. Gianna’s mother starts being a bitch once again after Kalani won. The contestants and their mothers leave, Travis’s mother is asked to stay back. Abby believes that Travi’s mother is at fault tor the decision that Travis made last night. Kalani arrives at the special one on one training session with Abby, Kalani’s mother isn’t all up in her child’s life. Abby tells Kalani that she has potential in winning this competition, that she needs to work hard in order to become a star. Abby believes in Kalani and wants her to become something great.

Ally and Trinity are partnered up together, Trinity is the princess and Ally is the evil stepmother. Abby appears out of nowhere to see what they’ve got so far, Abby points out how Ally needs to raise her legs higher; Abby mentions how Ally always is pigeon toed. Ally wants to just impress Abby, Trinity doesn’t have the perfect turn. Travis is partnered up with Kalani this time, this time Travis will need to redeem himself. Kalani believes that Travis could mess her up this time, she doesn’t want to disappoint Abby. Gianna and McKaylee are doing a modern take on Pinocchio. Gianna’s mother is starting to be a bitch once again, it’s not helpful at all and is making Gianna doubt herself.

Jojo is going to be doing a performance on her own with about four feet long hair, which could become a hindrance during her performance. Them mother’s are talking about Jojo behind her and her mother’s back. The mothers are helping the kids with their make up. Rachelle, Richy Jackson and Abby are introduced as the judges. Jojo is up first to perform, her performance is insider by Rapunzel. Richy gives the finger wave at the end of the performance Abby mentions wanting to be Jojo’s fairy god-mother. Abby was impressed with Jojo tonight, Richy believes that it was so good, that she was impressive tonight with the hair extension she was able to make those spins. Rachelle is also impressed with Jojo working with the extension.

It’s Travis’s first performance without his brother being there with him, and receives a call from his brother Tyler telling him to work hard and do his best. Ally and Trinity begin their performance of Evil Stepmother. Abby is mentioning the technique for Abby wasn’t there because of the pointed feet and turns. Trinity was okay, but had a little bit of problems in technique also. Travis and Kalani are up for their performance, of the Ice Prince and Ice Queen. Abby mentions the private lessons that Kalani had, she mentions how Kalani was able to turn with her bare feet. Abby wasn’t impressed with Travis at all. Richy mentions how it could of been better, their connection wasn’t there. Rachelle disagrees with Abby, she believes that Travis didn’t do that bad and believes that Travis wasn’t as bad as Abby made it. Gianna and McKaylee are doing their performance of Pinocchio. Rachelle mentions how McKaylee could of made better turns and didn’t like the big thump on the stage when she landed, she mentions how Giana didn’t have the fire and passion in the performance. Richy tells them that they were off at the isolation part of the performance, Abby mentions how this week was turns. She mentions how Gianna was lazy in her turns and McKaylee didn’t have great turns either.

The judges are now deciding who’s going to be going home today, the contestants along with their mothers stand up on stage. The judges felt that Jojo was the best performance of the night. Trinity, Kelani, Travis and McKaylee are safe for another week. Gianna and Ally are in the bottom two, in the end Ally is sent home and Gianna is saved.