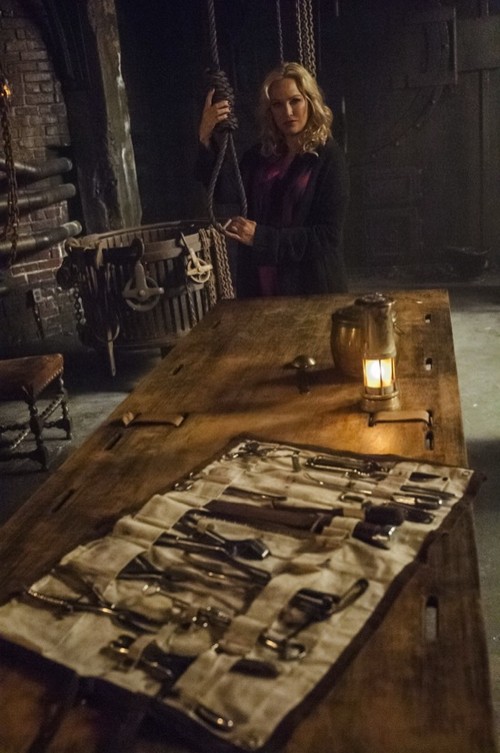 Tonight on Lifetime, WITCHES OF EAST END continues with another new episode.  On tonight’s show, called “A Parching Imbued,”  Dash tries to solve the mystery of the catacombs.  Did you watch last week’s premiere episode?  We did and we recapped it right here for you.

On last week’s episode, Wendy and Joanna came to blows over a secret Joanna had been keeping for over a hundred years. The shifter threatened Freya. Ingrid suspected Mike’s ulterior motives.

On tonight’s episode a mysterious professor with old connections to the Beauchamps tries to help Freya regain her powers. Killian makes a decision about his future in East End. Mike reveals an interesting theory to Ingrid. Amidst wedding preparations, Dash tries to solve the mystery of the catacombs.

The show opens up with everyone doing some cool magic on the beach — all in an attempt to get Freya’s powers back, which have been stolen by Penelope AKA Athena (Dash’s mommy).

Back at home, Joanna and Wendy have found a spell to help them locate The Shifter. They think they might be able to locate the identity of the Shifter by performing a spell with Freya’s blood. So far they don’t have much luck, but when Freya leaves for work, Joanna says she plans on testing Penelope and all the guests later tonight at the Rehearsal Dinner.

Meanwhile, Killian says he’s leaving for good. Penelope tries to persuade him against it.

Wendy and Joanna try to carry out that location spell to uncover the magical “fingerprint” left on Freya by the shifter’s spell. Joanna paints Freya’s blood and a mixture of other ingredients onto a blank canvas and says the identity of the one who cast the spell on Freya will slowly rise to the surface — if it works.

Freya gets her wedding dress and Dash walks in. The wedding’s been moved up and Dash and Freya will be getting married tomorrow. He’s clearly upset but tries to hide it all.

Meanwhile, Dash is trying to figure out the mysteries in the catacombs. He identifies a strange liquid metal.

Mike comes into the Library to chat with Ingrid. He brings in his father’s old diaries, which reveal a repeated statement: PARCHING BURNING. He says that he needs her help. “Why me,” she says. And he says, “Because you’re a witch.” She’s taken aback, and she’s not sure how to respond.

Ingrid reacts negatively and says she’s not a witch, but he says he saw her break some guy’s fingers with just a few words.

Freya comes out to see Dash and they talk about how excited they are to get married, and he says this is the adventure that he’s most looking forward to.

Wendy goes to seek out Victor, a professor who has a particular skill set that might be able to get Freya’s powers back. He’s hesitant, but Wendy is persistent.

In the catacombs, Penelope is lurking.

Joanna continues working with the spell to find the shifter.

The Shifter attacks Freya. While taking some of her hair, she tells her to give her mother a message — it’s in Latin.

Wendy successfully acquired the professor, and he’s mad that Joanna has no idea he’s there.

Mike comes back to the library and he reveals that the statement his father wrote over and over again in his diary is an anagram — which spells Ingrid’s name. He forces her to admit she’s a witch. To do this, he slashes his thigh with an axe, hoping she’ll reveal her magic and heal him.

Freya gives her mother the message. Joanna is startled, and she says they need to get her powers back soon. She says there might be one other way.

Ingrid reveals her magic and heals Mike, but she’s pissed.

At home, Joanna admits that they need to call Victor. Wendy agrees and, already a step ahead of her, yells for Victor to come downstairs. Joanna retreats into the hallway, almost looking afraid. Freya asks who this man is. Joanna tells her that he’s her father.

Joanna talks with Freya, and she apologizes for the circumstances of their meeting. Victor comes in to chat with Freya and he says he’d like to help. The spell requires two parents to transfer their blood — like a transfusion — into Freya’s. Victor and Joanna try the spell, but Joanna can’t stand seeing her daughter suffer through the spell. So she stops the process.

Freya, angry, runs to the Bent Elbow. Ingrid meets her there. Ingrid says that she has no interest in knowing their father. Freya learns at the bar that Killian will be leaving town soon and, though she won’t admit it, she’s visibly upset.

At home, Joanna’s fingerprint spell continues to work and reveal itself.

At the dinner, Joanna proposes a toast. But Penelope jumps in. Wendy collects the glasses to test for magical abilities, but everybody seems to come back mortal, even Penelope. AS the Beuchamps go to answer a guest at the door (Victor), Penelope finds the painting in Joanna’s study. The painting reveals Penelope’s face, which means that — as we know — she’s the shifter, the one who cursed Freya.

Victor struggles to reconnect with his children and Joanna, and he can’t believe that Joanna told everyone that he “abandoned” them.

Penelope alters the painting — to conceal her identity.

Joanna and Wendy look at the painting, which reveals the catacombs.

Meanwhile, in the catacombs, Penelope creates a mixture and throws it on the wall. It catches flames. She says, “I’m finally going to do it, Father. I’m going to kill her. And then I’m coming home.”