BY Robyn Good on May 20, 2013 | Comments: 3 comments
Related : Dancing With the stars, Dancing With The Stars Season 16, Performance Videos, Reality TV, Television 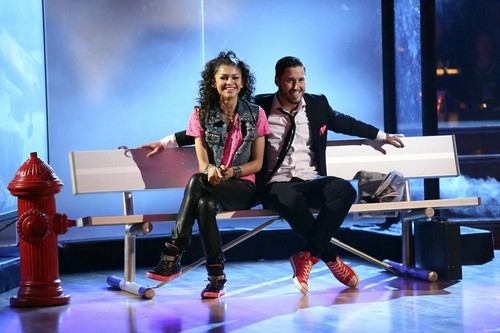 ZENDAYA danced a SAMBA for the judges choice dance to convince the judges and America that she should win season 16 of DANCING WITH THE STARS.  After 10 weeks of entertaining, stylized dancing from the remaining four couples, only one couple will be crowned “Dancing with the Stars” Champions. Tonight was their last opportunity to impress the judges and viewers.    If you missed the show, we recapped tonight’s show for you and if you want to see how all the couples did go HERE!

Judges Comments: Bruno: “That is what I was talking, that was a perfect combination of blending.  You lost nothing it that.  Magical!”  Len: “That was eye-popping show stopping Samba.  You have only scratched the surface of your talent.  That was terrific, well done!”  Bruno: “You are incredibly fierce, you have a natural flamboyance.  What your showed tonight was incredible moves.   You have a skill that is required from professionals.  You just keep getting better!”