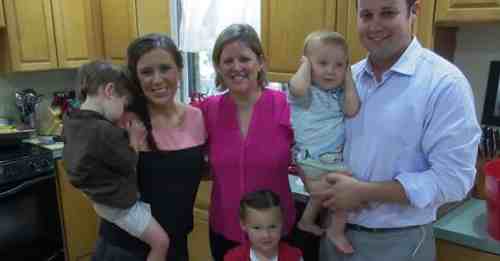 Tonight on TLC 19 Kids and Counting starring the Duggar Family continues with an all new Tuesday October 7, season 9 episode 9 called, “Duggars in Cuffs; Duggar Derby.” On tonight’s episodes to celebrate their 30th wedding anniversary, Jim Bob & Michelle go on a triple date with Jill & Derick and Jessa & Ben and have a big surprise planned. Also, the family prepares for their derby race; Jessa and Ben take the littlest Duggars out for a day of fun.

On the last episode, the oldest Duggar girls shared some sisterly time trying out hair & makeup for Jill’s upcoming nuptials. Then, they’re off to search for the perfect bridesmaid attire. Did Jill find a bridesmaids dress that fit her vintage feel while staying modest? Also Jill and the girls went to look for the perfect wedding shoes for her bridesmaids. Meanwhile, Josh & Anna made a very special “Duggar” wedding gift. And Jim Bob and the boys tackled laying down the carpet for the newlywed’s first home. Did you watch the last episode? If you missed it, we have a full and detailed recap right here for you.

On tonight’s episode to celebrate their 30th wedding anniversary, Jim Bob & Michelle go on a triple date with Jill & Derick and Jessa & Ben and have a big surprise planned. Meanwhile in DC, Josh gets back on track with his fitness goals by running a 5K. Also the family is gearing up for their big derby race! But first, Jessa & Ben practice their parenting skills and take the littlest Duggars out for a day of fun. When race day arrives, which team will finish first and be crowned the Duggar Derby champion?

On tonight’s episode of 19 Kids and Counting, the Duggars are going on a triple date. Jim Bob & Michelle’s wedding anniversary is coming up and so the older kids thought it would be nice to have a date with their parents. Hence the term triple date because it was going to be a date for three couples. Jim Bob & Michelle, Jill & Derick, and Jessa & Ben were all supposed to go out and enjoy themselves on a triple date. But Jim Bob and Michelle had decided in advance to surprise their daughters and potential future son-in-laws.

They had an officer friend of theirs “arrest” the younger couples. They weren’t brought down to the station or anything. They were just handcuffed together. Jim Bob and Michelle wanted to teach their daughters how much work marriage requires. So over the next couple of hours – the two couples had to learn how to work together.

And their first task was a picnic. In order to eat they had to make their own sandwiches and that meant learning how to make a sandwich while handcuffed. Shockingly that part was easier than it sounded. The obstacle course though did prove to be as difficult as it sounded. That was one was also timed.

The couples found it kind of silly but they realized what the parents were trying to do with the exercise. In their own weird way Jim Bob and Michelle merely wanted to help. They been through their fair shares of hardships and they credit their communication skills on making it through those tough times. They always knew how to communicate with each other during the medical scares and the financial troubles. And that what helped saved their marriage in the end.

Though when they asked the couples to fire a bow – that’s when this whole communication exercise just seemed like good old entertainment for Jim Bob and Michelle. Even if they’ll never say it.

As for Josh, he finally decided to run a marathon. He didn’t do all that well in the marathon but he was able to finish. He and his wife have been trying to get back on the healthy track and exercising is the best way to start. So hopeful he’ll continue what he started by running!

On the second half of tonight’s episode, Michelle has assigned some special mommy and me time for her and her daughter Joy-Anna. With so many kids, Michelle has to spread herself out a bit in order for all of her kids to feel like they have both her love and her attention. However this time Michelle’s daughter wanted to do something that absolutely frightened her mother. And that was horseback riding!

Michelle has been terrified of horses since one of them kicked her when she was young. But seeing as this was their “special time”– she managed to overcome her fear and get on a horse. It was hard on her yet she did it anyway. Though now her daughter wants to make horseback riding their thing.

Later Jim Bob had the older boys help him build derby ramps. They had built the soap box derby cars and so they just need the ramps in order to hose their own race. And at first Jim Bob thought the project was going to take them a few hours but in actuality it didn’t take as long as he thought it would. Once the kids knew what they were doing it was pretty easy to repeat the process.

After her siblings had had their pizza, Ben told them they had to be clean before they played any of the games in arcade. He was explaining to them how inconvenient it would be for the kids that played after them when Jessa decided to simplify her answer and told the kids their greasy kids would be gross.

He’s inclined to believe that children need explanation to go with their answers and she thought what she said was “same difference”. So he ended up agreeing with her.

When the Derby race did happen, the kids had to host qualification rounds prior to their real rounds. There was two possible drivers for each team and there was only three teams – Red, White, and Blue. So once the final drivers had been set – they started the race.

And though there were a few disappointments with the finals results – the Duggar family plans on continuing the Derby’s tradition. It was nice watching their kids work together to build their derbies and Michelle thought the experience could help bring her family together in the future.