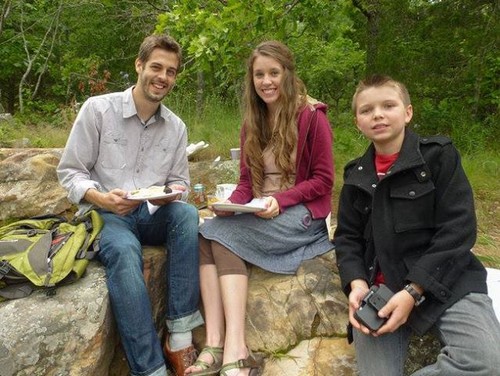 Tonight on TLC 19 Kids and Counting returns with another new season. On tonight’s premiere episode, season 9 begins with an episode called “Duggar Daughter Dates.” Jill and Derick go on a hike and picnic.

For those of you not familiar with the show, this season will consist of Jessa and Ben are courting! Dating with the intent of marriage, Jessa and Ben refrain from kissing or holding hands and always have a chaperone on dates, phone calls and even text messages. Now that their courtship is official, the Duggar boys put Ben to the test, making sure he’s ready to take care of their sister.

On the last episode, the Dillards and the Seewalds had Mother’s Day lunch at the Duggars’. Meanwhile, Jill and Derrick got engaged in what was a very memorable moment as Derrick had an artist write and sing an original song to Jill; the couple also took their relationship to the next level, they began holding hands.  Both families were delighted with the news that the first Duggar girl was now engaged. Did you watch the last episode? If you missed it, we recapped it right here for you.

On tonight’s episode Jill and Derick go on a hike and picnic, while Jessa and Ben have a date at a shooting range, but both outings are chaperoned, respectively, by James and Jason.

RECAP: Fun Fact: by time all 19 kids are married they would have equally spent over 300 hours as chaperones for their siblings. And sometimes these kids come to hate their job/duty because they have to watch over their siblings in sometimes the most uncomfortable position. Like when Ben takes Jessa out on a date, he generally takes his trunk which unfortunately only seats two people comfortable. So that means a third person then has to squeeze themselves into the space between them for as long as the ride may be.

And another example of this type of downside is Jill and Derrick. Jill’s younger brother James was their chaperone during their birthday date and he got carsick. It was a very long ride and he often felt like he was to be ill throughout it. So for most of the journey, his sister and her fiancée had to focus on him and keep his mind off of nausea.
Hence the courting experience can often become unpleasant experience for just about everyone involved.

In the meantime, one of the younger girls needed glasses. Jennifer was getting headaches and was complaining about her vision being bleary so the doctor advised she get glasses. And Mama Duggar found herself once again scheduling a visit for one of her kids (she’s a bit of a pro by now) and made sure the six year old was taken care of.

Later, Jessa and Ben went on their date and her brother Jason had to act as their chaperone. Ben and Jessa wanted to go to a shooting range. However Ben was apprehensive about his skill. As in he didn’t want to make a complete fool of himself in front of Jessa. Who, in case there’s doubt, he’s seriously interested in. So he let her go first and she ended up being a pretty good shot. Jessa did much better that day than when she went to the range for her birthday. And Ben had to follow that!

He was good but not as good as Jessa. According to Jessa, Ben didn’t want her to feel too bad by being better than her. While Jason believes his sister was simply the better shooter.

On Derrick and Jill’s date, they had a picnic. And James didn’t really get the chance to enjoy it because he didn’t know half of what the foods were. Like Hummus – James doesn’t understand why anyone would eat crush chickpeas. So he basically nitpicked at his food and held off eating while he waited to see what dinner was going to be.
So, yeah, chaperones really only to do these things out of love!

In part two of tonight’s episode, the newly engaged couple is zeroing in on their wedding plans. They were picking out cake and looking at venues. But the venues they were interested in weren’t typical with Duggar style. According to the impending bride’s mother, the Duggars tend to be a backyard and barefoot crowd. While Jill on the hand is interested in the traditional tiered wedding cake (that Jessa already knows she doesn’t want at her wedding) with the actual event possibly at a country club.

Michelle was a tad thrown when she acted as her daughter’s chaperone when they were checking out the country club. As one of 18 kids still at home – her parents have a tight budget. Hence they told their daughter there was also going to have to a budget for the wedding and ironically Jill was the one that came up with her own budget though now it seems like she forgot what it was. Because how in the world is a country club, one that proudly claims it has a koi pond type of club; affordable?

Not to mention there’s an occupancy problem as well. Take the typical number of people that’s invited to any wedding and times that by 19. Then it’s a Duggar wedding.

And even though the next place the three of them looked at was larger – it was also a country club. Country clubs don’t come cheap so how is the couple going to afford a wedding if they keep looking at expensive things? Are they tempting fate or just hoping for a lucky break later on?

With Michelle busy helping with the wedding, it was up to dad to figure out a way to keep everyone else busy and out of trouble. So he came up with a derby kit some of the kids were interested in. That way the kids got to enjoy themselves and funnily enough it’s natural for them to become competitive while working with their hands.

However his plan failed when they didn’t read all the directions on the box. They could build as many derbies as they want but how are they going to use them without wheels. In the smallest print ever – the box said wheels aren’t included!

As for the venue problem, Michelle decided to show her daughter where she and her husband got married. The church has been updated since and so Jill came to love on her own.