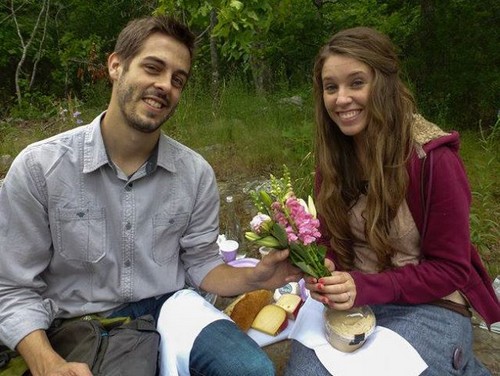 Tonight on TLC 19 Kids and Counting returns with another new season. On tonight’s premiere episode, season 9 begins with an episode called “Duggars & Mothers.” Jill Duggar is getting married! And with the wedding only a few short months away.

For those of you not familiar with the show, this season will consist of Jessa and Ben are courting! Dating with the intent of marriage, Jessa and Ben refrain from kissing or holding hands and always have a chaperone on dates, phone calls and even text messages. Now that their courtship is official, the Duggar boys put Ben to the test, making sure he’s ready to take care of their sister.

In the season 8 finale, the girls promoted their book, “Growing Up Duggar”. Meanwhile, Derick made secret plans at home that involved getting permission from Jim Bob to propose to Jill. Did you watch the episode? If you missed it, we recapped it all right here for you.

On tonight’s episode Jill Duggar is getting married! And with the wedding only a few short months away, the first Duggar daughter to get married is diving right into planning this Duggar-sized event.

RECAP: Last season we got to enjoy the romance of Derrick and Jill. The two of them enjoyed an old-fashioned courtship which happily led to an engagement.

However the Duggars only have three months to plan a wedding and Jill is the first daughter to get married. That means they’re taking on an extra lot of responsibility they aren’t familiar with. They didn’t have to do most of the wedding planning with their son Joshua because his wife and her family had taken the lead.

So mom, Michelle, is a bit worried. Neither she nor her daughter really know what to do in this situation. And hiring a wedding planner whose job it is to ask questions is just the whole planning process harder.

The upside to getting married though outweighs the bad. Seeing as they are done courting – Jill and Derrick can officially do more. Yet they’ve decided to hold off on actually kissing until their wedding and simply settle in the meantime with handholding. And as a wedding gift, Jim Bob is going to allow the newlyweds to stay at the new house until he eventually sells it.

The house is huge. Much bigger than what Josh and Anna had when they got married but the other couple doesn’t hold any animosity towards Derrick and Jill’s lucky break. Technically, Jim Bob didn’t have a house lying around when they got married and it’s extremely unlikely the rest of the children will find themselves enjoying their honeymoon in a mansion.

But nothing is perfect leading up the wedding. While Jill’s family are helping with the wedding and trying to prepare the house for her new family – Derrick’s mom has been battling lymphoma. His mom had ignored jelly bean sized lumps on her neck and when they weren’t going away – she had it checked out. So it was just fortunate that she did find out in time and she’s currently at the hospital going through treatment.

That’s also works against the young couple because her sickness has taken Derrick’s mother more or less out of the planning. Though they do try to include her as much as possible.

Then there was a special event coming up that Derrick’s mother couldn’t attend. The Duggars held a Mother’s Day dinner and All the Duggars were there, Jessa’s boyfriend and his family were invited, and Derrick’s family was invited. His mother didn’t make it but his brother and the brother’s girlfriend did. So it turned into this big family event. And she nearly missed it.

Thankfully, the family found a solution so that she didn’t. Derrick’s mom was able to video-chat with everyone from the comforts of her own home and she seems to be doing much better. Overall she looked stronger than she did at the hospital.

As for the dinner, Jim Bob took a minute to invite Ben (Jessa’s boyfriend) to come and live in their guest house. The patriarch could see how much his daughter was growing attached to the young man and had invited him in order for them to see where this relationship goes. Prior to accepting his offer, Ben and Jessa had a long-distance relationship so him moving in/nearby will be the true test on whether or not they have a future.

Her siblings think they’re going to get married one day and that’s probably why they volunteered to clean up the guesthouse to begin with. That guest house is disgusting and one of the boys even found a dead mouse in there.

But the family did do a good job and the end result looked less like the mess they started with and more like a hunting lodge. Ben had really appreciated it and he loves Jessa’s design style. He thinks it’s just one of her many charms.

The early days of living in close proximity are truly positive. One of Jessa’s sisters had tried to intimidate him with all the work that needed to be done and it didn’t work. So it looks like he’s going to stick around!