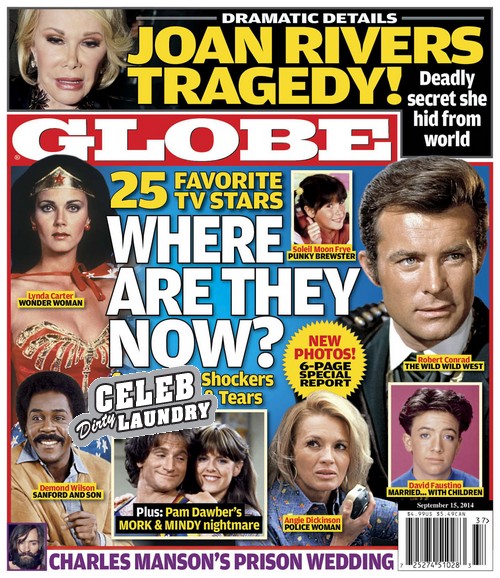 No other publication takes its readers for a refreshing walk down memory lane quite like GLOBE Magazine and the latest issue is right up there with GLOBE’s best. Aside from an accurate glimpse into the current lives of some of Hollywood’s greatest stars we are also going to take a look back at some of TV’s favorite stars. Wonder Woman is a comic book legend that will likely exist for eternity. Back in the 80’s there was a Super Friends cartoon that featured her but even before that the super hero spent quality time in our homes. Linda Carter played the iconic character back in the 70’s and the Sept. 15th print edition of GLOBE Magazine will get you caught up on her life as it is now.

Pam Dawber recently grabbed some headlines due to Robin Williams’ suicide last month. The actress starred with him on Mork & Mindy and while her career has been as successful as she wanted it to be, Pam has also suffered the loss of a few co-stars along the way. Not long after wrapping up filming on the CBS sitcom My Sister Sam, Pam’s costar Rebecca Schaeffer was gunned down in the doorway of her apartment building. The young star had been stalked by her killer for years and her murder led to changes in California stalking laws. Pam has often spoken about the loss of Rebecca and how unnecessary it was. The Sept. 15th print edition of GLOBE Magazine will give you a chance to catch up with Pam and it will also give you a glimpse into her struggle to work in Hollywood.

This 6-page pullout report on 25 former television stars will intrigue you because it’s filled with stories straight from the celebs that have never been heard before. Also in this issue of GLOBE Magazine you can find out the latest information available on Joan Rivers’ condition. The comedienne was admitted to Mt. Sinai Hospital in NYC late last week after a throat Endoscopic procedure at a nearby clinic sent her into cardiac arrest. Details are still pretty sketchy at this time but we know that Hollywood as a whole continues to pray for Joan Rivers and her entire family. There is already speculation as to whether or not the medication administered was perhaps too strong for the 81-year old. Do you think that Joan’s health crashed do to her aging body or will some negligence be revealed? Tell us your thoughts in the comments below!

This week GLOBE covers Charles Manson’s prison wedding. Now that should really be amazing! Can you imagine the lovely bride?

This issue of GLOBE will keep you riveted as you read about where 25 classic stars are now and all that has transpired in their sometimes tragic but always fascinating lives. We all hope for the best for Joan Rivers and GLOBE as some special research this week that will help clarify her situation for readers.   I’ll be sitting back with my copy of this week’s GLOBE to enjoy hours of informative reading and will certainly report back to you later in the week on some of the nuggets I uncover between the pages!