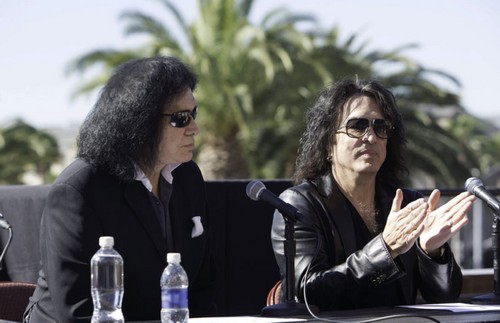 On the last episode, following the debut season of the Arena Football League’s LA KISS opened with a first look at rockers-turned-team owners Paul Stanley and Gene Simmons and their staff. The team owners hired professionals (well qualified professionals) to build their team and besides that they seemed to have dropped the ball with everything else. The coaches didn’t have all the equipment they needed and the team owners were busy designing team outfits. So, naturally, the main coach in charge was hoping his bosses got their acts together otherwise they couldn’t expect him to build a winning team. Did you watch the last episode? We recapped it right here for you.

On tonight’s episode, crucial setbacks and disappointing scrimmaging do not discourage the LA KISS.

Tonight’s 4th and Loud season 1 episode 2 is going to be great and you won’t want to miss it. So be sure to tune in for our live coverage of 4th and Loud — tonight at 9PM EST! While you wait for our recap, hit the comments and let us know how excited you are about this new series, 4th and Loud.

The loss of Colt from last week has seriously affected Head Coach Bob’s confidence. He was hired on by the LA KISS team specifically because he’s never lost and yet he doesn’t feel the team he has now are capable of continuing that great legacy. Take the quarterback he had to hire after Colt left – the man they ended up with is a nice guy. However he’s also an ageing veteran. He’s not the young hotshot they need to draw in the team or the crowds. And LA KISS is a new emerging team – they need all the help they can get!

The owners want to turn their team into an LA KISS experience which means the arena, the entertainment, and the football team all need to be at their best. Even if they’re only an expansion team. Expansion team means that some or most of the players are under contract by other teams in the league so Coach Bob had to not only form a winning team but he also had to teach his star players how to play more than one position. Just in case they’re short-handed one day.

And on top of that, the coach has to deal with the typical prima donna attitude of his players. Certain players don’t appreciate Bob’s coaching methods.

Bob had tried to get his fullback, Jeff, to listen to his critique from early on and Jeff for the most part had ignored him. He felt he had been in the position long enough to ignore advice. So during their exhibition, where the coaches were given the chance to evaluate their players in action, Jeff had went one to play his own plays and the way he wants to play them. And that ended with him epically embarrassing himself in front of everyone.

Bob for one was incredibly pissed with Jeff’s showing at the exhibition and if he could have – he’d cut him from the team then and there. But the other coaches overruled him. They’ve known Bob for years and they feel like he’s being too hot-headed in his decision. Jeff generally does much better than he did at the exhibition. All throughout practice – he’s been a really good player so they don’t want to cut him from the team if what happened was merely a fluke.

Though it later looks like Bob talked his fellow coaches around. Jeff is good a player. His problem is that he simply doesn’t listen to his coach and that’s what they need from a player especially when he attempts to do his own thing on the field. So Jeff was let go and the fullback position went to newbie Joe. Joe shows up ready to work and he actually seems to care about wanting the job. Maybe it was because of his different priorities but he did appear to be the better choice for the team.

Another surprise twist in the final cuts was the fact BJ Bell was hired. He’s been a bit of an underdog the entire time in training camp so getting signed to a contract was really a dream come true for him. And it was good for their family that both he and his brother made the team. If only one had been signed that could have caused problems back at home.

The team is completely set and that leaves only one other thing left for them to do and that’s win a game. Paul Stanley and Gene Simmons aren’t attaching their name to just anything. They built KISS to be synonymous with success so the actual team don’t necessarily have a choice. They were told to win and anything else besides that will not be accepted by the team owners.

The coaches know their job is on the line hence for their first game – everybody was pretty tense. Paul and Gene didn’t show up because they didn’t want add any pressure to already steamed situation but by missing out – they fail to see how the game was played. And they missed out on seeing for themselves whose fault it was that the LA KISS team kept messing up.

Their quarterback had an off game and Joe inexperience in the fullback position definitely reared its ugly head in the beginning. Yet Joe was able to make a comeback and the Bell brothers were overall a great combo.

Then the game came down to a draw. They had barely five seconds left on the clock and the coaches put all of their trust in their kicker. He was a fresh face and yet when the time came – he won the game for LA KISS!

On their very first game in the AFL – they managed to win, but at the end of the day can they sustain that same momentum throughout the rest of their season?