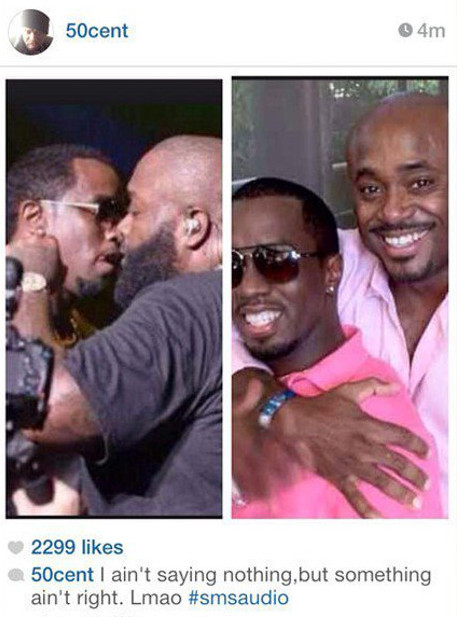 The world of hip hop is always infested with feuding stars. It used to be a very cut and dry east vs. west coast thing but, in recent years, it has all gotten pretty personal. The beef between 50 Cent and Rick Ross started back in 2009 because 50 decided to rattle his cage a bit. Let’s be serious, 50 likes to push buttons and so it should be no surprise that after years of radio silence between the former rivals he decided to toss a grenade.

The other night, 50 posted a pic on Instagram that showed Rick and Diddy in a position that made it look like they were both moving in for one hell of a kiss. The photo was captioned, “I ain’t saying nothing, but something ain’t right.” It was later removed but of course the damage was already done, just as 50 knew that it would be. If he was hoping that this would kick start a brand new feud, then 50 must be really disappointed, because Rick claims he has no intention of swinging back at his former rival. According to Rick, the stakes now are huge and he’s not compromising how far he has come for what amounts to a little school yard fight.

Do you believe that Rick is now above the game of chess that he once played with 50? Or is he just saying that while formulating his own plan of attack? Why do you think that 50 likes to start crap? I mean, he clearly seems to enjoy the fights with fellow rappers. What does he actually gain from it? Tell us your thoughts in the comments below!