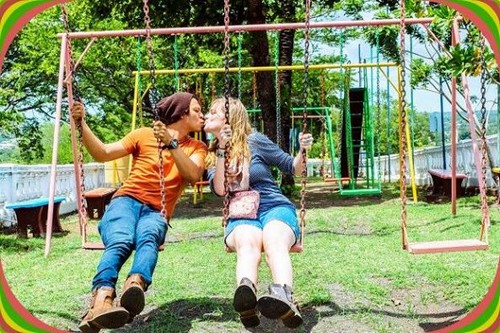 Tonight on TLC 90 Day Fiancé continues with an all new Sunday October 26, season 2 episode 2 called, “I’m Home America.” On tonight’s episode Evelin pushes Justin to introduce her to his family.

On the last episode, using a unique 90 Day Fiancé visa, six foreigners traveled to the US to live with their overseas fiancés for the first time. Each couple have just 90 days to decide to get married or send their international mate home. Did you watch the last episode? If you missed it, we have a full and detailed recap right here for you.

On tonight’s episode, Evelin pushes Justin to introduce her to his family. At Yamir’s album release party his manager throws his private life into the public eye. Mohamed meets Danielle’s skeptical son. Daya questions her engagement ring. And we meet a new couple Danny and Amy.

It’s disappointment all around on tonight’s episode of 90 Day Fiancé and you would be shocked about the sources behind it. Over in California, Evelin who has always been upfront about being very big on family is constantly feeling shut out because Justin doesn’t want to tell his family about her. At first it was because he honestly though springing his fiancée on his family would be a good idea. Like ripping off a Band-Aid seeing as they had no idea who was dating someone much less for it to have become serious.

But before he leaves the supposed love of his life to flounder in front of a room full of strangers – Justin did at least try to prepare Evelin for meeting his family. He introduce her to his friends which she later found out she needed to do especially when Justin wasn’t being honest with her.

Justin arranged the meeting with the hope it would be easier on his fiancée than actually meeting his family. And it was. However Evelin also learned a few things her fiancée had chosen to hide. Like the fact his sister-in-law has always been oddly critically of all the girls he’s dated. And the other woman has even earned herself unpleasant nickname because of it.

So while it was nice that Eveline found out about all of this prior to meeting her future sister-in-law – it would have been better if the news came from her future husband rather than his friends. It’s like he doesn’t know how to tell her bad news and yet he expects them to spend the rest of their lives together.

Then there’s Brett and Daya. The two of them have been enjoying their reunion though there’ve been a few red alerts here and there. For example, when Daya was in the car with her future mother-in-law she mentioned as fun antidote that she and Brett were going to have her ring appraised. It seems she’s bit doubtful about whether or not it’s real. So she wants to make sure with an official appraisal.

Also Daya doesn’t like the idea of living with roommates. She claims it would be too hard on her to constantly try and communicate. Though someone should remind her that excuse means nothing if she plans on living in America. Where she’ll have to find a way to communicate if she ever plans on going outside.

Brett fell in love with Daya because he liked that she was a prima donna. But living with her can be demanding. He had to make it up to her for arriving at the airport with the wrong type of flowers. So he made her a romantic candle light dinner for her.

Yet the mood on their first night never did change to a happier note and really that was all Daya’s fault. In spite of her boyfriend doing his best to please her – all she could talk about was getting her ring appraised. She was that eager to see if it was real!

As for Danielle, she’s ecstatic to have Mohamed finally with her. But he’s finding it difficult to adjust. The house, her house, ended up being smaller than he thought it would be and most of the space is taken up by her three teenage daughters.

They’re sweet girls and they do want their mom to be happy but becoming accustomed to new member in the house is going to take some time.

Danielle’s son on the other hand is outright mistrustful. Cory is a young man and so he asked to see his mother and her new boyfriend at the local bar. It’s a neutral zone and the men could also play each other in a round of billiards.

Mohamed had originally said he didn’t know the game but that was a lie. He knew more about it than he let on. Which came off as fishy. Then when Cory didn’t get to speak to him one on one – there was really only one thing to say. And that was “don’t treat my family bad and we won’t have problems”.

Meanwhile, Chelsea and Yamir are leaving Nicaragua and their goodbyes inadvertently got dragged out by his manager. Gabriel still thinks Chelsea in manipulative and is forcing Yamir to leave with her and give up everything he worked for. So he revealed to Yamir’s fans the real reason why Yamir is moving to America. It’s Chelsea’s fault.

It was a bit underhanded of him but Chelsea has managed to drown out most of everything he’s said either to her or about her. And that includes when he told her that taking Yamir to go live in a small town was going to be mistake. Hence they continued with their plans and went through with leaving the country.

But if that doesn’t sounded like a disaster waiting to happen then meet Amy and Danny. Amy is from Cape Town, South Africa and she flew all the way to Pennsylvania on a fiancée visa. But while her fiancée Danny is respectful of waiting for marriage before they could live together and consummate their relationship – he doesn’t seem to be all that enthused about actually spending time with her.

On her first day in America, he basically dropped her off at his family’s house and then left to go to work. As in he didn’t take time off nor was planning on doing that in the near future. She’ll merely get him on the weekends it seems!