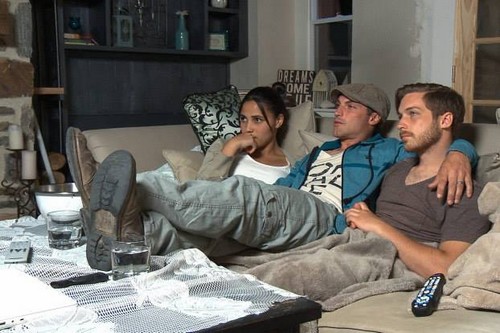 Tonight on TLC 90 Day Fiancé continues with an all new Sunday November 23, season 2 episode 6 called, “Fears, Family, Future,” and we have your weekly recap below for you.  On tonight’s episode Amy’s mom visits from South Africa; Daya and Brett have a frank discussion about Cassidy’s behavior; Justin and Evelin have dinner guests; Yamir meets with music producers in Chicago; Jason surprises Cassia.

On the last episode, Cassia argued with Jason about trust issues; Danny’s date night with Amy was ruined by his brother; Danielle’s family doubts that Mohamed would stick around; Justin finally saw his family after revealing his secret; Yamir’s move came with shocking news.  Did you watch the last episode? If you missed it, we have a full and detailed recap right here for you.

On tonight’s episode as per the TLC synopsis, “Justin and Evelin invite Jake and Jen over for dinner. Daya confronts Brett about Cassidy’s behavior. Amy’s mom arrives from South Africa. Yamir meets with music producers in Chicago. Jason has a surprise for Cassia.”

On tonight’s episode of 90 Day Fiancé, Daya and Cassidy are going to have their first day alone together. Prior to that, the “two women” in Brett’s life haven’t really had a chance to bond. Brett was always there or his mother was there. So Daya watching Cassidy is actually a test meant for all of them. Brett wanted to see what kind of stepmother Daya will be. And though Cassidy didn’t seem to want to pursue a relationship with Daya – Brett was so sure that was all about to change if given the time.

But he was spectacularly wrong. His daughter Cassidy is a little brat. The little girl had attempted to lock her future stepmother out of the house and then tried to play it off as if was part of a joke. When the truth is it was probably an indication of how she truly felt about one day sharing her father with Daya.

And remember, in spite of her antics Cassidy is still a kid. So at least she has an excuse for her bratty behavior. Adults on the other hand know better. Though they don’t always act like they do.

Justin and Evelin finally had a chat with his brother and sister-in-law. The other couple have been the biggest naysayers when it comes to the legitimacy of Justin’s relationship and so for the sake of his mother – he made an effort to try and build a bridge. However Jake and Jen ended up making the lunch they were invited to quite awkward. They kept hitting Evelin with some pretty invasive questions. Like if she’s ever been married, does she have kids, and other things like that.

Then things really went downhill when Justin announced his wedding plans. He told them he and Evelin were eloping. Possibly on a beach somewhere. And that they might hold a reception later. So naturally Jake and Jen were hurt. They feel cut off from Justin’s wedding and they also know how much it’s going to mean to Jake and Justin’s mom.

And while Justin’s wedding plans aren’t agreeable – at least he knows he’s getting married. Jason hasn’t even proposed to Cassia yet. Not only have the two of them not been getting along but Jason’s father (who’s seen the couple interact up-close) happens to think their relationship is good or healthy for anyone. And he definitely doesn’t want his son to propose to Cassia.

As for Yamir, his music career has a chance in the United States. He has the spark and the ambition to make it but he’s running into the same problems his former producer warned him about. The small town Chelsea wants to live is not the kind of atmosphere Yamir needs. He has to be in a big city. Preferably multicultural. The newest producers he ran into warned him about the market and they told him he’s not going to make it anywhere by living in some backwoods town. They advised him to move to Chicago and now it’s up to him to convince Chelsea that’s a good idea.

Chelsea has been moving around for the last ten years. So her sole focus is wanting to settle down for a while. And that’s some Yamir can’t afford to do. If he wants to seriously pursue a career in music then he knows he can’t take a break until he’s found sort of foothold into the industry.

Yamir keeps mentioning balance when he talks about his relationship with Chelsea and his dream of a career. But Chelsea seems to want him to sacrifice even more for her. She’s in comfortable being around her parents and feel they should settle down and then think about music down the road.

He’s 28. How far down the road is she talking about?

Then Brett came home and he ran into a very angry Daya. Daya warned him about setting limitations for his daughter. She’s never heard him say no to the little girl before and Daya feels like he should be able to take a firmer hand with her. But Brett feels like the little time he has with his daughter (like her summer vacation) shouldn’t be made to feel like a “prison”. His words!

He wants to be the fun divorced dad and in doing so he has given his daughter free reign to ride rough shod all over him and Daya. Yet Daya has grown tired of dealing with a spoiled disrespectful child. So she told Brett to man up. He he’d try but he also asked her to try as well. Brett wants Daya to be more understanding of Cassidy.

So Daya did try to be nicer. And maybe it was her demeanor or Cassidy having a nice time that day – their relationship did slowly started to defrost. And Daya got to be the stepmother she wanted to be. So hopefully that will last.

And then there was Amy. Amy’s mother arrived from South Africa and the women bonded over picking out wedding gowns. Though they did so all the while ignoring the elephant in the room. Amy’s future father-in-law apparently has some gripes about interracial marriages. And despite not having met each other yet – the father has already put a dampener on the upcoming wedding.

Then even as engagements are falling apart left, right, and center – Jason proposed to Cassia. The same young woman that is utterly bored by his more retirement like community. And the same woman that asked him if he would move to Brazil with her and then ignored her own question when Jason side-stepped it. So they think they can get married and let’s see how long that last before she grows tired of someone constantly telling her what’s inappropriate.