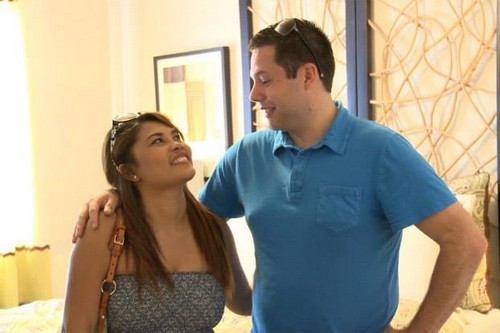 Tonight on TLC 90 Day Fiancé continues with an all new Sunday December 14, season 2 episode 9 called, “Red Flags,” and we have your weekly recap below for you. On tonight’s episode Mohamed hopes he is making the right choice with Danielle. Danny’s brothers pass him the sex torch.

On the last episode, Mohamed consulted a lawyer on his wedding day; Danny’s and Amy’s families meet; Justin surprised Evelin and his mom; Chelsea and Yamir discuss his music career; Daya and Brett look for an apartment; Cassia breaks down during a fight with Jason. Did you watch the last episode? If you missed it, we have a full and detailed recap right here for you.

On tonight’s episode as per the TLC synopsis, “Mohamed hopes he is making the right choice with Danielle. Danny’s brothers pass him the sex torch. Cassia confronts Jason’s skeptical brother when meeting his family for the first time. Brett’s mom confronts brett about Daya the day before the wedding.”

It’s time for these couples to see what they’re really made of on tonight’s episode of 90 Day Fiancé titled “Red Flags”. And so far Cassia hasn’t been all that pleased about what she’s learned about Jason. As it turns out – she’s marrying a pushover.

Admittedly, and at first, his behavior didn’t really bother her. Especially as she and Jason had the difficult enough task of trying to figure out how to live with each other but unfortunately she soon came to learn they have more than just that to worry about. It seems Jason’s family, namely his brother, have some questions regarding Jason and Cassia’s relationship. And Cassia for one is even at this point questioning her fiancée’s ability to stand up for her.

Jason likes to say his family will adore Cassia. Yet Jason’s brother had referred to his fiancé a “Green Card” and if that’s what he’s willing to call her behind her back – what else must he be whispering into Jason’s ear?

These are real concerns for Cassia because she knows Jason is not confrontational. He even tries to bend over backwards whenever he gets into a fight with her. So if that’s how he is then truthfully she has a right to be anxious about him. His family might actually make him reconsider marrying her.

Speaking of which, Danielle ad Mohamed are about to get married. And after working out the financial problems – Danielle has begun to worry about her own family. She’s hoping no one says anything during the ceremony but not everyone is happy about her marrying a man she barely knows as she seems to be.

Originally, Danielle’s daughters were her biggest champions when it came time for them to meet Mohamed. And yet they too have come to change their minds about him. Now, they wish their mom had more time to get know her fiancée before she had to marry him.

And that’s what a lot of the other families want. They want their loved ones to have more than a mere 90 days to see if the person they’re marrying is really someone they should in fact be marrying. But, sadly, time is of the essence.

When Daya came to this country, she and Brett knew she would only have 90 days to get married. If they were not married in that time frame then she would be sent back to her homeland. No exceptions. Though for some reason Brett’s mom seems to what to push those boundaries.

Brett’s mother has had 3 months to voice her doubts and yet she waited until the final days before the wedding to say something. Apparently, she only recently has been doing some research and what she found out is that in these situations (foreign brides) are highly likely to end up being a scam.

So she said something to her son and seeing as the apartment is so small – Daya had overheard them from a nearby room.

Daya couldn’t understand why Brett’s mother has waited so long to say something. Hence she felt like that up to that point the other woman must have been lying to her face. Because while there was tension – the two women were truly doing their best to get to know each other before all of this.

Luckily, though, not everyone’s family had attempted one last-ditch effort. Take for instance Danny and Amy. These two managed to have their wedding go down without a hitch. The happy couple got to say their vows and they ended up having a wonderful albeit awkward wedding reception what with his brothers making sex jokes.

So they at least got to ride off into the sunset and in spite of all of her worrying – so too did Danielle. She married Mohamed and surprisingly no one had objected during the ceremony.

But things came to a head for Cassia and Jason. She had went out with him and friends the night before the wedding. And things eventually grew uncomfortable for everyone involved. Jason started to drink so much that he began to come off as mean and after Cassia tried to warn him about it – he and his friends left her to go continuing drinking somewhere else.

So now Cassia is saying she can’t marry him!