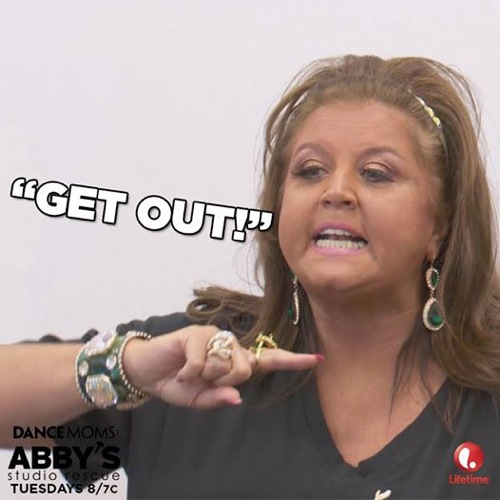 On the last episode a group of mothers decided to duke it out in the lobby of the studio, the owner had completely lost control of their studio; was Abby able to get her back into control of her own studio? Did you watch the last episode? If you missed it, we have a full and detailed recap right here for you.

On tonight’s episode Abby heads to Penn Point Dance Academy in Bakersfield, CA, a family-run hip hop studio on the brink of financial ruin. Owner/operator E-baby is frustrated with his wife Michelle’s inability to keep the studio running smoothly and the constant war between the different competition teams’ dance moms, yet seems to be in total denial about the run down condition of the studio. Can Abby empower Michelle, fix up the studio, quell the dance mom drama and solve their billing problems in just four days?

Abby Lee is rescuing Pennpoint dance studio of Bakersfield, California, a family-run business. The dance studio is less about technique and more about the joy of dancing itself. However, they need paying customers in order to continue contributing to the community. E-Baby, the husband in the couple who runs the studio, is concerned about his wife Michelle, who becomes emotionally invested in the clients and will let them go without paying.

The studio has two dance teams whose mothers are fighting with one another, the Girlfriends and the Hollywoods. The Girlfriends is a less advanced group than the Brats, an elite competition team, and the mothers are constantly trying to ensure their kids are in the best group. “I would love to see the drama at the studio go away,” E-Baby says. He says that it deters new customers, which definitely doesn’t help their situation.

Abby Lee comes to the studio. “Have they seen Dance Moms?” Abby says. “I don’t think they should be too excited that I’m here.”
Immediately, Michelle identifies herself as the “janitor” of the studio in addition to her other duties, and Abby is shocked she calls herself this while running a dance studio.

Abby tells them that they will be performing a showcase in four days in order to get new dancers to join the studio.  “Hip hop is not my forte,” Abby Lee says. “I do, however, know what makes a successful dancer,” she continues.

She does a survey of the kids which reveals that the kids aren’t taking enough classes to be “well-rounded” dancers. She tells E-Baby he needs to offer more classes to make his dancers more successful. However, E-Baby is worried about it making the situation even more “stressful.”

Abby takes him aside to fully discuss the problems in the studio.  He tells her about how they put many of the kids on scholarship because they can’t afford the dance.

He also says they have a hard time keeping track of who is paying and that his wife, Michelle, doesn’t do such a good job of enforcing the rules.

In addition, he is basically the sole teacher at the school. Abby tells him he can’t do it all himself.  The dance studio has cement floors and other health hazards, like a glass window that had to be taped shut. Abby has no idea why he rented this place for a dance studio.

Abby confronts Michelle on calling herself the janitor, discussing how he often asks her to do menial tasks like getting toilet paper and that he is controlling and often does her job for her.

Michelle does admit that she can be “a little too nice” and talks about a customer, Melissa, who is causing trouble in the studio. Abby tells her she needs to stand up to her, and that she shouldn’t socialize with the customers because it makes it even harder to get money from them.

Abby decides to put AutoPay in place in order to make sure they’re actually getting paid for their services.

Abby goes and talks to the moms, immediately meeting Melissa, who says that all of the mothers at the studio are backstabbers. She learns of the conflict between the mothers of girls in the Brats and Girlfriends. The mothers all start screaming at each other, and Abby shuts them up, telling them that if they don’t pay up, they need to shut up.

Abby stages a dance battle to see what the kids have to offer in terms of dancing, as she is unfamiliar with their hip hop style dancing.

Melissa’s daughter, Fancy, immediately loses her battle with another girl. “Her moves were anything but fancy,” Abby says.
However, Abby is “pretty impressed” with a dancer named Twiggy.

She calls the dance battle “impressive” overall, but says they have a whole other battle ahead of them.

Abby gets the dancers together to talk to them about the showcase. The first routine will be a dance battle between the Brats and the Girlfriends.  “E-Baby has to choreograph this number so the warring factions can battle it out onstage and settle this rivalry,” she says.

The second number will be by a choreographer named Erik. Abby wants E-Baby to learn to be less of a control freak. During his rehearsal, Erik criticizes a dancer for sticking her tongue out, which is something she often does, which E-Baby has a problem with.

“I’d say the quality of dancing is medium,” Erik says. However, “the potential is very high.”  He says Pennpoint is a winning studio waiting to happen.  Erik agrees with Abby that E-Baby needs to relinquish some control and stop trying to run the dance studio entirely on his own.

During E-Baby’s rehearsal, Abby adds a part to the dance battle routine where the Brats will pull a girl from the Girlfriends’ side over to their side.

Abby decides to have one more talk with E-Baby about his control freak tendencies, saying if she can’t fix this problem, she may not be able to save the studio. E-Baby thinks that sometimes Abby doesn’t know what she’s talking about.

Abby decides she needs to take the first step by renovating the dance studio. She gets the studio new floors and ballet bars appropriate for teaching dance students, a separate waiting room for the moms, a lounge for the kids and a more colorful motif.

Abby leaves for a dance competition with ALDC while Pennpoint staff, dancers and moms go check out the new studio.

Alma, one of the mothers at the studio, complains about Melissa talking about her child behind her back.

E-Baby doesn’t think Michelle will stand up to Melissa, saying that if she doesn’t change, he may have to take control. However, Michelle does stand up to Melissa. “I’ll make it easy for you,” she says. “Take Fancy and leave. I can’t believe you would do that to her.”

Alma is “proud” of Michelle for stepping it up.

At the showcase, Erik’s choreography works so well that E-Baby admits it and also he should get similar choreographers to help with the studio in order to make it better.

The Brats and Girlfriends have their dance battle, and the Brats choose to pull Twiggy over to their team. “It feels good,” she says. “I’m so excited.”