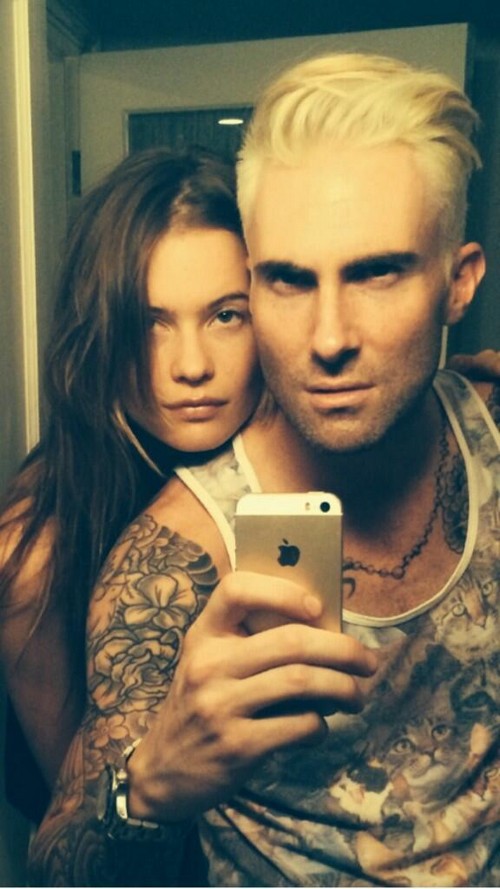 Seems celebrities can’t keep their cell phones out of their hands and their egos in check. Two recent selfies that caught my eye (then made me want to gouge them out) were from James Franco and Adam Levine. Both are pretty douchy. So here’s what I want to know – why is Instagram busting Rihanna’s chops about showing her nipples when these two boobs are allowed to post at all?

Levine’s Twitter selfie is of himself and his lovely fiancee – who is obviously a huge fan of his douchebaggery – side be side showing off his new Lannister-blonde hairdo. This was posted just three days after the Maroon 5 singer tweeted “I can’t wait til the word ‘selfie’ goes away.” Well genius, maybe when we no longer need a word for egotistical self-portraiture… Hmm?

Despite the peroxide locks, Levine is looking all manly in a wife beater with the tats on display – an image hilariously ruined when you notice his shirt is emblazoned with cuddly cats. What the hell is that shirt about? Is this what happens when you spend too many years as a pussy magnet? Do felines literally begin to stick to you?

And now to James Franco. I have to admit, I’m generally a fan of his. I must have watched Bound 2 at least five times. He channels Kanye West brilliantly. This tendency to mock his (and others’) celebrity leads me to believe his most recent mostly-naked selfie is a bit. I see it as him mocking all the myriad other celebs (Kardashian, Bynes, Lohan, et al) that post bathroom mirror selfies on a near-daily basis.

Franco looks like he just rolled out of bed after an absinthe bender and four hours of sleep. He’s disheveled, sweaty and is wearing just some not quite clean looking boxer briefs pushed down below his junk which he’s thoughtfully hidden in his hand. He tweeted then later deleted, leaving some to muse that it was a sexting shot accidentally posted publicly. That doesn’t seem plausible since there’s zero (and maybe even negative ten) sex appeal in the pic.

There’s no doubt that Levine’s selfie is hotter than Franco’s, but as it’s such an overt appeal to throw attention and compliments his way, I have to say “no thanks” but I would love to know where to get that kitten shirt so I can send one to Franco. I think it would go nicely with his beige/dingy briefs – it would perfect the ensemble…

I have faith in Franco am sure this selfie was more of his hilarity – and for those that didn’t get the joke, that likely amped up his amusement (it did mine). Remember, this is the man who said: “Sometimes I get a little sad and I feel like being alone. Then I talk to my cat about it and he reminds me I’m James Franco. Then we dance.”

By comparison, here’s a quote of Levine’s: “I hate flying. Know why? Because no one really understands how planes actually work.” Wow. Just wow…