Longmire Cancelled, Audience ‘Too Old’: A&E Insults Viewers as Fans Boycotting A&E – Will USA Buy and Save The Show? 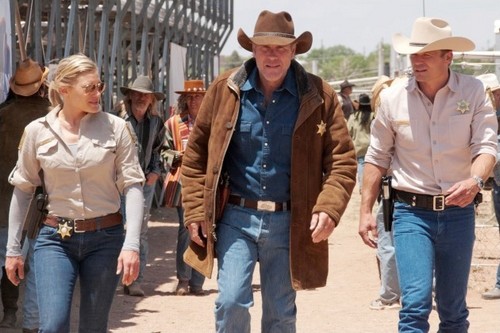 Fans of Western drama Longmire were shocked on August 28th when A&E announced that they had decided to cancel the series, despite the show’s phenomenal ratings and huge audience. At first the network claimed they were cancelling Longmire because they were scaling back on their drama line-up, and then a press statement revealed that the cancellation occurred because the network didn’t own the series and moving towards all in-house productions. But, the truth has finally come out and it looks like Longmire was axed simply because it’s 5.6 million viewers were “too old.” Ouch! An older viewer demographic doesn’t get the top dollar advertising reserved for the 18-45 slice of supposedly bigger, or at least discriminating spenders. Nice, so no matter that Longmire was A&E’s # 2 show in terms of viewers and # 1 ever scripted drama but because the audience was a bit older on average the greedy shortsighted network cancelled it!

The October 6th edition of GLOBE Magazine reveals, “The cast of A&E crime drama Longmire are crying foul over the show being axed – because it’s viewers were too old! Despite high ratings the TV hit was suddenly cancelled after three seasons – and now outraged fans are trying to save it!” According to the magazine’s inside source, “the cast [of Longmire] was told that the network is trying to reach a younger audience.” Longmire executive producer Greer Shepard is reportedly devastated by A&E’s cancellation, and angrily told GLOBE, “You don’t just flush 5.6 million people!”

We know from experience how devastating it can be to have one of your favorite series cancelled, but at the end of the day money, talks. Networks are paid by sponsors for commercial spots during television shows, and the sponsors won’t pay the big bucks for commercial time unless the shows are scoring in the key demos, 18-34, and 18-45 year-olds. Longmire may have 5.6 million viewers, but they apparently were not falling in to the key demos that top-dollar advertisers were looking for.

Regardless, there is still hope for Longmire fans. The studio that owns the crime drama, Warner Horizon, is currently shopping around for another network to air Longmire. And, rumor has it USA is close to inking a deal. Were you a fan of Longmire? Will you be joining all of the diehard fans that have taken to social media to protest the cancellation and boycott A&E? Do you think it is right to cancel a TV show because the viewers are “too old?” Let us know what you think in the comment section below!