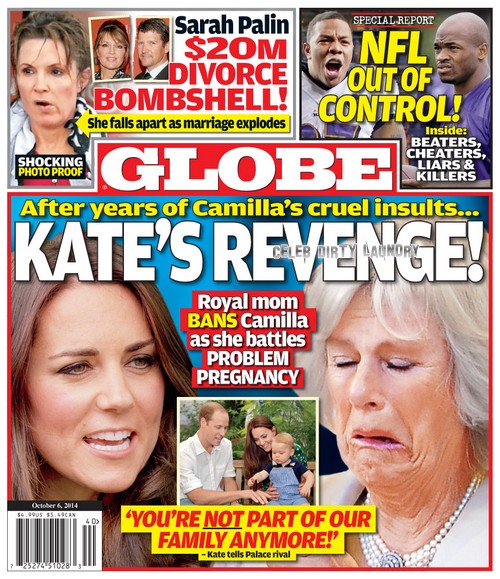 We were shocked to learn that Kate Middleton finally got up the nerve to confront Camilla Parker-Bowles and seek revenge by banning her mother-in-law from seeing her and Prince William’s family and babies, most especially Kate’s new baby. CDL brought you the headlines from GLOBE and now we are able to bring you more details of the struggle between Kate and Camilla.

Prince William and Kate Middleton are expecting baby number two (or two and three if the twin rumors are correct), the Palace confirmed the joyous news of the Duchess of Cambridge’s pregnancy on September 8th. While no one is certain exactly how far along Kate Middleton is, popular theory is she around 10-12 weeks pregnant. Regardless, Prince William’s wife is already taking the necessary steps to ensure she has a pleasant pregnancy. The first item on her agenda? Kate Bans Camilla Parker-Bowles from the Royal Family!

It’s no secret that there is no love lost between Kate Middleton and Prince Charles’s wife Camilla Parker-Bowles. Camilla knows that with Kate Middleton in the picture and popping out royal babies left and right, her chances of being crowned the next Queen of England are diminishing by the day. Scandal erupted after Kate’s pregnancy was confirmed, when Camilla reportedly accused her of faking her morning sickness to get out of scheduled appearances. This attack by cruel Camilla was only the latest in a long history of invidious behavior.  Camilla actually called the Princess lazy and entitled claiming that Kate should not allow her pregnancy from preventing her from going on her planned solo Malta trip.  And then, Camilla had the gall to congratulate William and Kate on their pregnancy and try to worm her way into their new baby plans. Well this was too much and time for Kate to have her revenge and ban her cruel mother-in-law !

According to the October 6th edition of GLOBE Magazine, the previously mellow Duchess of Cambridge has finally snapped on Camilla Parker-Bowles, and officially banned her from all of her and William’s family events and new baby plans. GLOBE’s inside palace source reveals that when Camilla tried to congratulate the wife of Prince William, “Kate couldn’t believe her ears, she knows all too well the kind of damage Camilla has tried to cause behind her back. She completely cut off Camilla and told her, ‘You’re not part of our family anymore. Stay away!’”

Camilla Parker-Bowles may have finally met her match in nauseous and hormonal Kate Middleton. Queen Elizabeth and Kate Middleton may not see eye to eye on everything, but Queen Elizabeth is supporting Kate’s revenge ban of Camilla, and is even preparing to try and buy Prince Charles’ second wife out of the royal family and pay her off with a hefty divorce settlement. Are you surprised that Kate Middleton finally stoop up to Camilla Parker-Bowles, or are you surprised it took her this long to finally snap on the devious Duchess of Cornwall? Let us know what you think in the comments below!