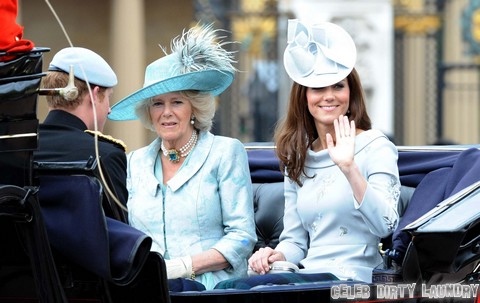 There’s no love lost between Camilla Parker-Bowles and Kate Middleton, and our royal sources tell us that Camilla’s dislike of pregnant Kate has extended to her morning sickness and subsequent cancellation of royal duties. Now that Kate has cancelled her trip to Malta, the Duchess of Cambridge’s first solo official royal trip, you can be certain that the Duchess of Cornwall is even more convinced of Princess Kate’s malingering.

Apparently, Camilla doesn’t consider Hyperemesis Gravidarum to be a serious illness, and she thinks that Kate is over-reacting to a bit of morning sickness. Our sources also claim that Camilla has been dissing Kate for cancelling all her public royal appearances and Prince Harry’s birthday party due to a touch of morning sickness, something Camilla thinks that Kate should just fight through.

Let’s put Camilla through this disease and see how well she comes out, right? She may be dissing Kate for using her illness as an excuse to cancel her public royal appearances, but is Camilla any better? It’s not like she makes public appearances all that often either, and she doesn’t even have the excuse of taking care of a small child. Plus, it just comes off as bitterness on Camilla’s part that she would feel this way over Kate.

On the one hand, Kate Middleton always has been extraordinary lazy, and I wouldn’t say anything if Camilla was dissing Kate for taking endless vacations and not working much throughout the year. But Kate actually has a legitimate reason for taking a break right now, and she doesn’t want to put her unborn child at risk. Maybe Camilla can’t understand that, or maybe she thinks that it’s Kate shirking her royal duties. But anyone can see that it’s just plain bitterness.

What do you guys think of Camilla’s never-ending feud with Kate? Let us know your thoughts in the comments below.