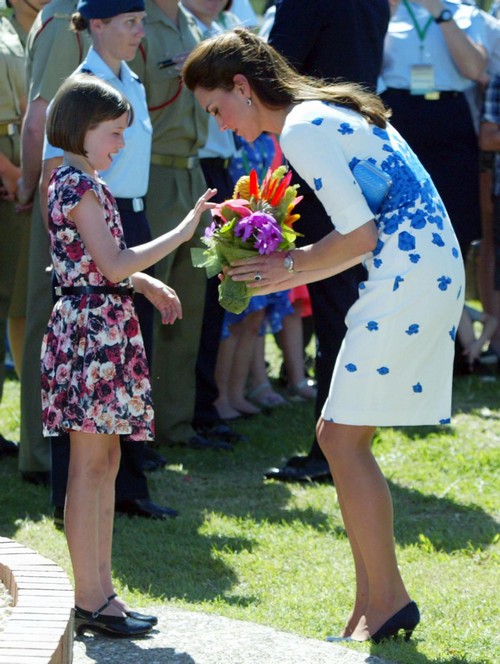 Whether you were a fan of the late Princess Diana or not, you have to admit that she was an amazing and groundbreaking philanthropist. She hugged and showed love to AIDS victims back in the 80s when most people were scared to touch patients. She walked land-mine ridden area to raise awareness. And, most of all, she raised her boys to think of others and be “real” people. So how would the People’s Princess feel now that her little Wills (aka Prince William) has married a woman (Kate Middleton) too lazy to get out and do good works?

Diana was known for her ultra-busy charity schedule – she made more than 170 appearances each year – that’s every other day. Plus she was the single mum of two busy boys. Meanwhile Kate Middleton has one son, a hubby by her side and nothing but time on her hands. So what’s she devoting her time to? Who knows…

Prince Charles is one of the busiest royals in the world making nearly 190 charitable appearances each year and even his 88 year old mummy Queen Elizabeth is doing more than her granddaughter-in-law. By comparison’s Kate is doing about 35-40 appearances each year. This means that less than once a week she’s getting off her royal duff to put on some finery and put in an appearance.

Granted, she and Will have been taking some trips, but really, aren’t those glorified vacations for the most part? Kate shows up, people give her gifts, kiss her royal rear and they stay in the nicest places and are hosted fabulously, feted at parties, wined and dined. How is this work? It’s not. And while she does have a little one at home, she also has an army of help there – Kate Middleton is a princess!

Waity Katie’s defenders have said she’s learning to be a “working mom” but explain to me where she was working before. I will grant you that she had a rough start to her pregnancy – could be something to do with the fact that she’s an obvi anorexic and gestating babies need nutrition to thrive and survive. Hmm? But once she figured out she couldn’t starve herself without also starving little Georgie in utero, her pregnancy got better, but she still wasn’t out and about much.

And now that she’s popped the heir, what has she been up to? Not enough. Prince William needs to tell Kate to get off the throne and get to work. Will was raised for most of his young life by a determined Princess who wanted to do good in the world and now he’s shackled to a Princess determined to do very little. It’s kind of sad really and has me wondering who will fulfill Diana’s legacy if not her offspring.

Although he doesn’t make the news as much, it seems that Prince Harry is the one royal who best emulates his mother’s giving spirit and natural empathy for those less fortunate. He’s busy serving in the military but still started an organization to help orphans in Lesotho, began working with WellChild that works with sick children and also supports a charity to help injured rugby players.

Whenever you see him on tour, he’s not standing on a podium waving politely, he’s hanging with the people, kicking a football around, dancing in the streets and genuinely smiling, happy to be out there among real people and doing good. Now if only we could somehow transform Kate from royal fem-bot/Stepford castle wife into someone that can realize that she’s been blessed beyond expectation and should be giving back. Don’t hold your breath.

Of course Kate needs to contend with Prince William’s partying ways whenever he is out of her sight. Below you can catch some of him and brother Harry during their trip to America for Guy Pelly’s wedding.