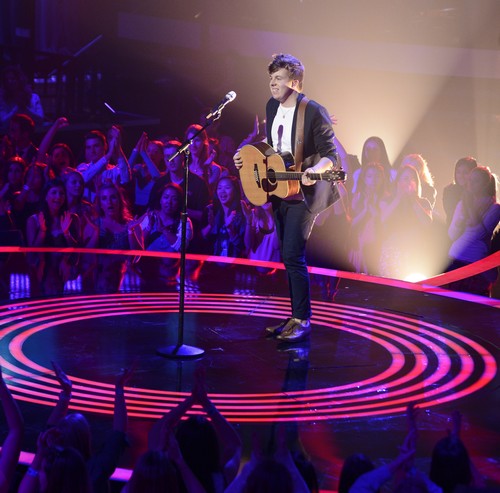 Tonight on AMERICAN IDOL the Top 12 finalists performed songs perform songs that spoke to their “Home.” For his song ALEX PRESTON sang, “I Don’t Wanna Be” by Gavin DeGraw.  Just in case you missed tonight’s show we have you covered and you can read our full and detailed recap here!

Judges comments on tonight’s performance: Judges; Comments: Jennifer- “Alex, first I wanted to say I love the suit, you look official, and you’re really going with the rolled up pants joints.  As far as the song goes, I felt like it wasn’t your best performance.  The arrangement overtook your vocal performance, you have to make sure that it suits the song.”  Harry – “I’m so used to hearing you in an intimate introspective context.  You’re really good at seeing a soft song, it’s nice to see you step out of your comfort zone.  It sounded like your vocals were overpowered.”  Keith – “The word instability kept coming to me throughout the performance.  The song kinda was around you instead of you centering and being in the song.  You started losing your breath in between sentences, and that is all due to nervousness.  I always applaud your originality man.”

Alex Preston – I Dont Want To Be – American… by IdolxMuzic