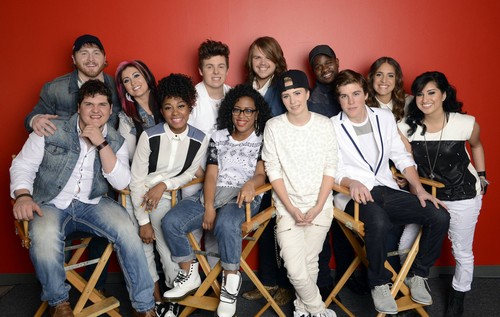 Tonight AMERICAN IDOL continues on FOX with a new episode.  Tonight the competition continues as the Top 12 finalists perform songs that remind them of home Did you watch last week’s when the Top 13 performed?  We did and we recapped it right here for you.  If you missed any of the performances from last week, don’t worry we have you covered.  We have all the videos for your enjoyment, right here.

On last week’s episode the Top 13 opened the show performing a mash-up of the Imagine Dragons’ hit, “Radioactive” and OneRepublic’s “Counting Stars.”  71 million votes were cast in the battle to reach the Top 12 – the results were revealed throughout the night.  By the end of the evening Kristen O’Connor was eliminated.

On tonight’s episode the Top 12 finalists compete for America’s vote.  Ben Briley, C.J. Harris, Jena Irene, Caleb Johnson, Jessica Meuse, MK Nobilette, Emily Piriz, Alex Preston, Dexter Roberts, Majesty Rose, Malaya Watson and Sam Woolf – will perform songs that speak to their “Home.” Song selections can range from a song that was popular during their childhood to a tribute to their home state.

Tonight’s show is going to be an exciting one, which I’m not going to miss and neither should you. So be sure to tune in for our live coverage of FOX’s American Idol XIII – Top 12 Finalists Perform – tonight at 8PM EST! Celeb Dirty Laundry is your go to place for all the up-to-date American Idol News!

Judges’ Comments: Keith – “Gosh, I like your stage presence, it’s really coming to life.  And, I liked seeing a different side of you.  I like that way you are starting to move around.”  Jennifer – “What I am starting to learn from you, is it doesn’t matter what kind of a song you sing, your unique voice makes it your own.” Harry – “You make different choices in the melody, and I liked the changes you make.  You’re seventeen, you should have been clowning all over the ceiling with that song.”

Judges; Comments: Jennifer- “Alex, first I wanted to say I love the suit, you look official, and you’re really going with the rolled up pants joints.  As far as the song goes, I felt like it wasn’t your best performance.  The arrangement overtook your vocal performance, you have to make sure that it suits the song.”  Harry – “I’m so used to hearing you in an intimate introspective context.  You’re really good at seeing a soft song, it’s nice to see you step out of your comfort zone.  It sounded like your vocals were overpowered.”  Keith – “The word instability kept coming to me throughout the performance.  The song kinda was around you instead of you centering and being in the song.  You started losing your breath in between sentences, and that is all due to nervousness.  I always applaud your originality man.”

Judges Comments: Harry – “A couple of things, when you walked it out it felt understated.  Noramlly when you perform it’s like a laser beam, for the first time ever the audience didn’t applaud when you hit a high note.  I think the audience could tell that you were off.”  Keith – “I love the way you sing, and I love your musicality.  If you really really mean it then no one is going to care about your pitch.” Jennifer – “This is a tough one, I understand both of their arguments.  You look great and you feel like you’re comfortable, but it’s like Ryan said we needed superstar performances tonight.”

Judges’ Comments: Keith – “I like the way you took little liberaties with the phrasing, and the best part is you messed up at the end and forgot a moment and it was totally vulnerable.”  Jennifer – “I think we are being a little hard on you guys tonight.  I think back to when Scott McCreary won, and he had such a wonderful voice and surprised us every night, and I think that’s what you have to do.”  Harry – “It’s not about being hard on anybody, it’s about being honest.  It was by far the best performance of the night.”

Judges’ Comments: Jennifer – “You know it makes me happy to hear that you were listening and this song influenced you.  I have to say I loved it, I’m bias.”  Harry – “I though it took a lot of courage to sing that song to Jennifer.  The people were into that song even before you came out, you have to match the intensity of the locomotive train or else you are going to just be a passenger.  The song and the production was too big for you tonight.” Keith – “I loved it Emily.  You’re going to be here next week I guarantee it.”

Judges’ Comments: Harry – “So Caleb you are unquestionably the most consistent of any performer on the show.  There’s a big difference between being consistent and predictable.  Rock and roll to me was born out of turbulence and change and revolution.  What can you bring to rock and roll to bring it forward?  How can you not be predictable?”  Keith – “First of all you are one of the best singers I have seen in a long time.  When you do a song like that, it’s about being with the band.  You gotta figure out how to get that thing going on without a band.” Jennifer- “I love you, you’re what we’ve been waiting for all night.  I know farther down the road we’re going to get you to sing softly.  Great job tonight.”

Judges’ Comments: Jennifer – “You’re right this is what music is all about, it’s about putting out a message.  You look great tonight, I love the way you look, and I loved that song.”  Harry – “You sang the lyrics and you sang sharp and it was all right.”  Keith – “CJ, all that is missing now is you figuring out a way to make a song more your own.  Don’t just do a cover, find something different to do to a song.  What is your artistic

Sam Woolf is singing “Just One” by Pilot [VIDEO HERE]

Judges Comments: Harry – “I really really liked the lyrics to this song and I thought it was pleasant experience.  There has to be emotional dynamics though, I’m starting to feel that there is only one note when you sing, and you need to try something else.”  Keith – “The beautiful thing, the tone of your voice is like butter.  It’s so good, its beautiful.  If you made an album tomorrow of original songs, I would go and buy that record.”  Jennifer – “We keep saying the same thing tonight, we’re at a point in this contest where we need super wow performances.”

Malaya Watson is singing “Take Me To The King” by Tamela Mann. [VIDEO HERE]

Judges’ Comments: Keith –“I don’t know that song, it’s a beautiful song, what a great choice.  I loved that you started on the piano, and the completely insane range that you have.  Great song Malaya.”  Jennifer- “ I just was with you the entire time, I had tears in my eyes and gooseys from head to toe.  I’m so proud of you.”  Harry – “It was gutsy to change the familiarity of a pop song to a gospel song.  I’m very proud of you, because you didn’t get off the rails.  You started from Point A and you seen it all the way through.”

Judges’ Comments: Jennifer – “You know in the beginning something happened with the piano and you weren’t in sync, but in the end you had me.  It was something we have been waiting for all night.”  Harry – “Something didn’t connect with me, it just felt shouted.  I don’t think everybody disagrees with me, it was okay, it wasn’t great.”  Jennifer – “I think the hard part Ben is you have an incredible voice, but it’s a blessing and a curse.  Where you take it and what you do with it, will or won’t affect me.  There was so much emphasis on the technicality in that song, that you lost me.  You could lean into the mic and not move a muscle and you would have had me.”

Majesty Rose is singing “Fix You” by Coldplay. [VIDEO HERE]

Judges’ Comments: Harry – “You look very much like you belonged on that stage you have a lot of confidence.”  Jennifer – “You don’t always have to go big, sometimes you can stay small in that zone.”  Keith – “I could just repeat what they said but I know one thing, we are going to see you next week.”