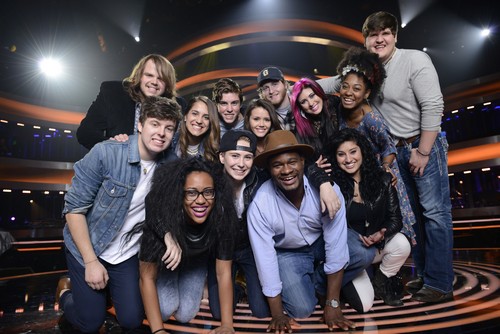 Tonight AMERICAN IDOL continues on FOX with a new episode.  Tonight the competition continues as the Top 13 finalists perform songs that convey the message, “This is Me.”   Did you watch last night’s episode when the Top 13 were revealed?  We did and werecapped it right here for you.

On last week’s episode this was the night we met our Season XIII Top 13 Finalists! After a brutal Rush Week, 20 contestants remained in the competition. Each was hungry for the title, but only 13 would make it through. Ten contestants were voted into the finals and the final three spots went to the judges’ wildcard picks. The Top 10 contestants based on America’s vote were announced first.

Tonight’s show is going to be an exciting one, which I’m not going to miss and neither should you. So be sure to tune in for our live coverage of FOX’s American Idol XIII – Top 13 Finalists Perform – tonight at 8PM EST! Celeb Dirty Laundry is your go to place for all the up-to-date American Idol News!

Judges Comments: Keith – “You’re such a likable song I can see why American loves you so much.  That was a great cover of a song but now you gotta figure out how to make it a Dexter Roberts performance.” Jennifer – “I felt the same way how do we make it a Dexter performance?  But it was a really great performance and you really got the crowd going.”  Harry – “Maybe the way to make it more you, is to use that personality more.  I’m not sure if that was your nerves holding you back but you should go out there and have a good time.”

Judges Comments: Jennifer – “Malaya your performance was an A+.  It wasn’t your best vocal performance, we know you can blow, at the end it went of the rails.  But for me this was just one performance, you’re a contender baby.”  Harry – “I think you’re a contender too, I’ve been thinking about you and you remind me so much of an arts’ school I went to and they would kill to have you.  You seemed a little nervous to me tonight, but that’s going to go away.  Keith – “This show is about learning and growing.  Your energy is so contagious on stage, now you just gotta learn how to put it into your songs.”

Judges Comments: Harry – “So, I think that you’re a really strong pop singer.  I’ve heard you sing really in tune before, and I saw your ear piece, it must be something tonight, because every one is out of tune.”  Keith – “What was great about that song was that you showed all your range, you brought it up and down in a shortened period of time.”  Jennifer – “Not just you, but to all the contestants, stop thinking a little bit.  You gotta start think more about what you know and not what you are scared might happen.”

Judges Comments: Keith – “First of all I love Johnny Cash and I loved that you did a Johnny Cash song.  The tempo was pretty quick.  But, here’s the thing, you’re such a good artist so all I ask of you is don’t ever sacrifice your artistic ability to put on a show.”  Jennifer – “I liked that you picked up the tempo, I really did like it.  That was a good example of showing us who you are and taking a song and making it your own.  I thought it was great.”  Harry – “I liked the fact that you did it up tempo, and it was for me the best performance of the night.”

Judges Comments: Jennifer – “That was a lot of fun, I really like this whole up tempo feel tonight.  We know that you guys all have great voices, and at the end of the day we are going to feel your energy.  I think that was really good.”  Harry – “You have this kind of cry in your voice that I like to hear.  I wish I could have heard you sing something with that cry in your voice.  Hopefully America let’s you stay along for awhile.  I thought it was an okay song choice.” Keith – “I don’t agree Harry I think it was a good song choice.  I thought there was a side to you we haven’t see until tonight.”

Judges Comments: Harry – “I’m so used to seeing you with no make-up on and you’re so beautiful I just have to get used to it.  I have really enjoyed watching you grow every week.  I would suggest in the middle of phrases when you’re not singing, you could interact in the audience.  I enjoyed it.”  Keith – “First of all I love the way you look, the whole thing is really working.  This is what I love about Idol is we get to watch this growth, but you particularly, the way you’re getting confidence on stage.  Your voice never fails you.”  Jennifer – “I didn’t know that song, but I loved it and I loved how you delivered it.  It was really smart of you to choose that song.  You are awesome, loved it.

Judges Comments: Keith – “That was personally I thought a killer song choice.  Janelle is a good place to draw from for you.  Now it’s just a case of becoming more confident in what you do.”  Jennifer – “I don’t know you just have your own style, singing that song was so perfect for you and the different ways the rhythm hit your body and you moved, not every body has that.  I see it in you, and you are blessed.”  Harry – “You sang Happy and this tune so well.  There are so many different types of music that you have the ability to sing.  I think that was terrific.”

Jena Irene will be singing “The Scientist” by Coldplay. [VIDEO HERE]

Judges Comments: Jennifer – “Jena you have such a unique voice and you use it very well.  And on top of that you’re a powerhouse.  That was a tough song I was worried for you but you pulled it off.”  Harry – “The coolest thing about what you do is you make interesting choices on a pre-existing melody.  The choices you make as a singer make the lyrics come across a different way”  Keith – “It was a little bit pitchy in the beginning, but then you leaned it into it and really took charge of it.”

Alex Preston will be singing “A Beautiful Mess” by Jason Mraz. [VIDEO HERE]

Judges Comments: Harry – “I liked that tune and I think that was a good tune to you.  I think it’s brave, but I would caution you that you try to sing in tune.  Also man I felt like that was so inward, that I didn’t really feel what you were trying to say.”  Keith – “This is the thing about performances, what Harry said, it did the opposite to me.  I got pulled into it.  Jennifer – “I agree with Keith I was really caught up in the emotion and the mood of it.  I love it I thought it was really good.”

Jessica Meuse will be singing “Crow and the Butterfly” by Shinedown.

Judges Comments: Keith – “That was a very bold but cool song choice in my opinion.  It reminded me a little bit of the first time we saw you, and there was a dark haunting quality to you.”  Jennifer – “Just the sound and the power of your voice gave me gooseys.  It was my favorite vocal performance of the night.  I would love to see your body relax just a little bit though.”  Harry – “There were so many butterflies in the back, I was distracted by the crazy graphics behind you.  I thought that was strong man and I heard a different sound of your voice.  Nice job.”

Emily Piriz is singing “Glitter In The Air” by Pink.

Judges Comments: Jennifer – “You know Pink is one of my favorite female artists ever.  That was a tough song to take on but you did it beautifully.  I don’t know what to say I’m gushing, it was really good.”  Harry – “I really dig that tune and I like the fact that you said this is a leap of faith, Jen’s right that’s not an easy song to sing.  You did exactly what you were supposed to do and I’m proud of you.”  Keith – “I  agree with Jen that was a beautiful performance from top to bottom, one of my favorite performances of the night.”

Sam Woolf will be singing “Unwell” by Matchbox 20. [VIDEO HERE]

Judges Comments: Harry – “The lyrics I think is so important in that song, and I wish your vocal mirrored it.  I almost wished it was a little more messed up to match the tune.  I thought it was good, not great.”  Keith – The tempo was a little messed for me, you have a great way of holding the center.  The way you perform and the way you look is very captivating.”  Jennifer – “You’re like a quiet storm.  Your voice is amazing and you need to start realizing that and start getting loose up there.”

Caleb Johnson is singing “Pressure and Time” by Rival Suns.

Judges Comments: Keith – “Caleb, you just have serious pipes man.  That was such a great song, I love Rival Suns.  That song told me all about who you are.  You gotta figure out now how to put a twist on it now.”  Jennifer – “You’re so ready for the rockstar life I can see you on the bus with your band and girls everywhere, breaking hearts.  The thing is you have the goods to back it up.  Harry – “It’s great to hear some rock on Idol.  If Rival Suns ever need a lead singer, you got it.”