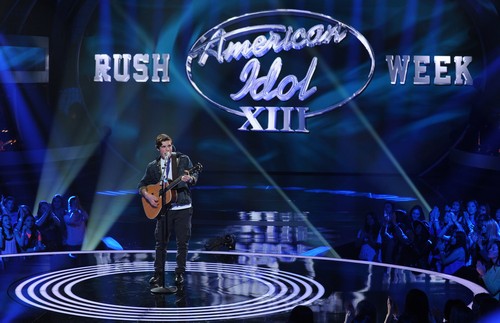 Tonight on AMERICAN IDOL the Top 12 finalists performed songs perform songs that spoke to their “Home.” For him song SAM WOOLF sang, “Just One” by Pilot.  Just in case you missed tonight’s show we have you covered and you can read our full and detailed recap here!

Judges comments on tonight’s performance: Harry – “I really really liked the lyrics to this song and I thought it was pleasant experience.  There has to be emotional dynamics though, I’m starting to feel that there is only one note when you sing, and you need to try something else.”  Keith – “The beautiful thing, the tone of your voice is like butter.  It’s so good, its beautiful.  If you made an album tomorrow of original songs, I would go and buy that record.”  Jennifer – “We keep saying the same thing tonight, we’re at a point in this contest where we need super wow performances.”