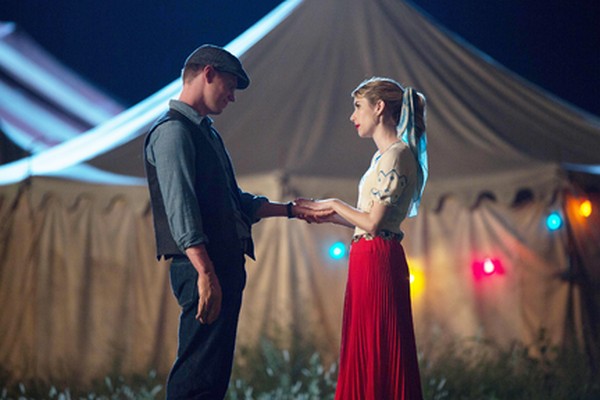 In the last episode Edward Mordrake continued his search for a Freak to add to his ghostly coterie. Elsa told the grisly story of her days in Germany. Jimmy and Maggie had a run-in with the Twisted Clown. Did you watch the last episode? If you missed it, we have a full and detailed recap right here for you.

On tonight’s show, from the FX synopsis, Stanley and Maggie hatch a plan to murder the Freaks. Gloria hides the evidence of Dandy’s gruesome new hobby. A health scare reveals Desiree may not be the oddity she once thought.

Maggie Esmerelda and Stanley are at the hotel and he’s talking about his fantasy plan. Essentially, he wants to murder all the freaks and store them in tanks that can later be sold to the museum of oddities. Esmerelda isn’t too keen on the idea of murdering people but, ultimately, she accepts her position in his twisted con. Stanley’s plan is to get comfortable with Elsa and gain her trust.

Gloria wakes up to find the housekeeper dead. Dandy comes running down. Gloria immediately knows Dandy’s responsible for the murder. She says that she’ll have to clean up his mess — just like she always has to do.

Stanley talks with Elsa about his proposition. He’s acting as if he’s a big wig talent agent who works for WBN, the biggest broadcast network in television. He tries to convince her that the world of TV is the newest, hottest thing. Elsa says that she’ll never be caught in that black and white box. She says that she’ll never participate in something that she considers to be the “death and art of civilization.”

Maggie sneaks up on Jimmy, who’s practicing for his act. Maggie reads his palm and basically tells him to leave the freakshow. She obviously likes him and doesn’t want him involved in the con she and Stanley are pulling off. She wants to save him. She tells him to leave, to go north, maybe to New York, but he tries to kiss her instead. She doesn’t accept his kiss. She tells him that he has a bright future — it’s just that she’s not in it. He storms off sad.

Jimmy goes to look for Dell. Desiree opens the trailer door and says that he’s gone and she doesn’t know where he’s gone. Jimmy breaks down and wants to kiss Desiree. At first, Desiree doesn’t accept his advances, but then she gives in. She says, “Make me feel something, Jimmy.” He begins to pleasure her with his fingers. Soon, she starts screaming in pain. Jimmy removes his fingers. They’re covered in blood. He leads Desiree out of the trailer. Blood runs down her leg.

Ethel says that she’ll help her, that she’ll take care of her. Meanwhile, the show must go on. Ethel tells Jimmy to get into the Big Tent. He goes in there and introduces Elsa — the next act.

In her private tent, she speaks to Stanley. She wants to hear more about his television propositions.

Ethel takes Desiree to her doctor — the one who was kind to her. The doctor asks if she has regular menses. He asks her if she “bleeds once a month.” She says that she bleeds a few times a year. The doctor says that she’s not a boy at all. Her “penis” is actually an enlarged clitoris. The doc says that she’s 100% woman — genetically and physically. The bleeding she experienced was actually a miscarriage.

Meanwhile, Dandy and Gloria bury Dora’s body in a deep, deep hole that Gloria plans to use as a new garden. She and Dandy toss bulbs into the soil.

Elsa prepares to go take publicity photos with Stanley. As she leaves the tent, she sees Stanley driving away with Dot and Bette.

We get a glimpse of Stanley presenting Dot and Bette to the museum owner. Next, we see a scene of him injecting a cupcake with poison.

Stanley takes Dot and Bette for a picnic. He presents the cupcake to Dot first. We see the progression of Bette and Dot’s death.

Next, we learn that this was all just Stanley’s fantasy.

In reality, Dot refused the cupcakes for the both of them. She says, “We have to watch our figure if we’re to be television personalities.”

Dandy is in his playroom being awkward. He gives a monologue about how he’ll become the greatest actor in America, and he believes that Twisty was put on this earth to show him the great art of murder. He says, however, that he’s no clown. He is the future, and the future starts tonight.

Dandy goes to what looks to be a gay strip joint. He runs into Dell, though he doesn’t know who he is. Dell is having drinks with a special someone. He’s apparently seeing someone behind Desiree’s back. Dell’s clearly gay and hiding it from everyone. Dell tells this guy, whose name is Andy, that he loves him. Andy is a prostitute and he tries to be nice about things when he says, “This is my office, when I’m here, I’m working.” Dell leaves in a fury.

Dandy takes Andy to Twisty’s van. Eventually, he stabs them. Both are wearing nothing but their underwear. The strange part is that, even after being stabbed countless times, Andy appears not to die. Dandy says the number one rule to being a good killer is getting rid of the evidence. He cuts off Andy’s arm . . . even then, he appears to be alive. Andy says, “Please. Please kill me.” Dandy looks on in horror — and then he begins to saw off his other arm.

The phone rings at Gloria’s home. It’s Dora’s daughter, Regina. Gloria, talking to Regina, admits that she was a bad mother growing up. When she gets off the phone, Dandy has returned home. She turns around and screams.

Dell, who’s distraught that Desiree has chosen to get some cosmetic surgery to reduce her man-like parts, visits the doctor who’s agreed to do the surgery. He breaks his hands. Dell threatens the doc that if he breathes a word of this to the cops that he’ll do the same harm to his family.

Meanwhile, Elsa takes Dot and Bette away from the camp. She told them that they were going into camp when, in actuality, she was taking them to Gloria and Dandy Mott’s house. Gloria answers the door and Elsa says, “I think I have something you want.”