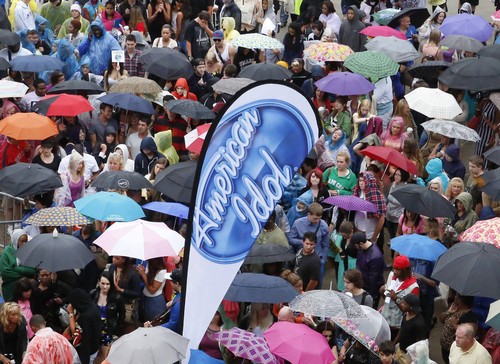 Tonight on the FOX network AMERICAN IDOL continues with the second-night of its season 13 premiere and it is another 2-hour show.  The judges Jennifer Lopez, Keith Urban and Harry Connick Jr. head to Austin and then across the country to San Francisco to find the next American Idol.  Did you watch last night’s premiere episode?  We did and we recapped it right here for you.

On last night’s show the first of the auditions began in Boston and Austin.  We got the first look at this season’s judging panel and I have to admit is is much better than last season.  I am not missing Nicki Minaj at all.  For the first time in a long time the judges actually seem to have chemistry.  The judges all had this to say about judging this season.  Harry Connick Jr. is excited to be judging American Idol. Jennifer Lopez enjoys “watching someone’s dream come true before her eyes.” Keith Urban thinks the best part is giving someone the opportunity to “ride the ride they are looking for.”  Overall Jennifer, Harry, and Keith selected 21 contestants from Texas and 25 contestants from Boston, Massachusetts. So far there are 46 potential American Idols headed to Hollywood.

On tonight’s show the auditions continue and the judges head to Austin and across the country to San Francisco.  On of the things I am enjoying already this season is the judges get along with each other, no more bickering.  It almost seems like Idol is trying to go back to their earlier format that worked.  I am excited to see if it continues this season.

Tonight’s show is going to be an exciting one, which I’m not going to miss and neither should you. So be sure to tune in for our live coverage of FOX’s American Idol XIII premiere night 2 – tonight at 8PM EST! Celeb Dirty Laundry is your go to place for all the up-to-date American Idol News!

The first singer to tryout at the open auditions in Texas is 27 year old Jesse Roach. Her neighbor fell in love with her singing and paid for the trip to Austin because she wanted Jesse to audition for American Idol. Jennifer loves her voice, Keith thinks that she has soul, and Harry Connick Jr. liked her “rasp.” It is unanimous, Jesse Roach is getting a Golden Ticket to Hollywood.

Up next is 18 year old Steven Curd, 22 year old Anna Melvin from Tennessee, and 22 year old Ryan Clark. All three of them receive Golden Tickets from the judges. They are going to Hollywood!

Megan Miller of Louisiana is performing a Carrie Underwood song for the judges next. Jennifer loves the “cry and rasp” in her voice. Jennifer, Keith, and Harry all vote “yes.” Jennifer is getting a Golden Ticket.

27 year old Grace Anne Field is a professional piano player from Texas, but the judges aren’t impressed with her singing. Grace is not getting a Golden Ticket.

28 year old Rick Rowling wants to be an actor. His plan is to tell jokes, instead of singing, and get “noticed” Harry Connick Jr. tells him to get out because “he is disrespecting the process.” People have waited their whole life to get an American Idol audition, and he is wasting their time.

28 year old T.K. Hash is singing “My Songs Know What You Did In The Dark” after his President Obama impression. He nailed the impression and the song. Harry, Keith, and Jennifer all vote “yes,” T.K. Hash is going to Hollywood.

15 year old Tristan Langley has brought his Mom along with him to his audition. She came in third (after Kelly and Justin) on the very first season of America Idol. Tristan was only four years old when his Mom performed in American Idol. Jennifer votes “yes,” Harry votes “no,” and Keith votes “yes.” Tristan Langley has made him Mom proud, he is going to Hollywood.

Farmer LJ Hernandez has been an aspiring singer since he was four years old, his fiancé even left him because she didn’t support his dream to be a singer. It looks like Jennifer, Harry, and Keith don’t support him either. He didn’t receive a Golden Ticket.

20 year old Worship Leader, John Fox, auditions next, singing a Bob Dylan song. The American Idols judges are impressed with John’s rendition, and they give him a Golden Ticket.

Samuel Ramsey, 24 years old, is singing a “jazzier” version of “I Want You Back.” The judges aren’t impressed with his “jazzier”version. No Golden Ticket for Samuel today.

Kaitlyn Johnson, is only 15 and traveled all the way to the auditions from Oregon. Harry thinks that Kaitlyn “isn’t ready.” Keith really liked her voice though. Jennifer is the tie-breaker, she decides to give her “one more chance.” Kaitlyn is going to Hollywood!

23 year old Ronald Reed thinks that he is going to conquer world hunger with his music. Unfortunately, the judges don’t think he has what it takes to be on American Idol. No Golden Ticket for Ronald today, and he is very upset.

26 year old David Luning is taking a shot at a Golden Ticket next, singing a song he wrote himself. Jennifer thinks that David’s voice is “interesting.” Keith is impressed that he wrote the song himself. Daivd Luning is going to Hollywood.

Twins, Selena and Sierra are both auditioning for the judges. Selena goes first, and sings a Janis Joplin song. Her sister Sierra gives it a go next, and sings “One Plus One.” The judges have decided to give Selena a Golden Ticket, not her twin sister Sierra though. That’s awkward!

17 year old Brianna Oakley auditioned last year, and she made it to the second rounds and then she was cut. She has decided to try out again for American Idol. This year she is singing the song “Stay.” Jennifer, Harry, and Keith decide to give her another chance. Brianna is going back to Hollywood.

The judges handed out a total of 19 Golden Tickets in San Francisco, all together there are 79 singers headed to Hollywood for the next round of American Idol.