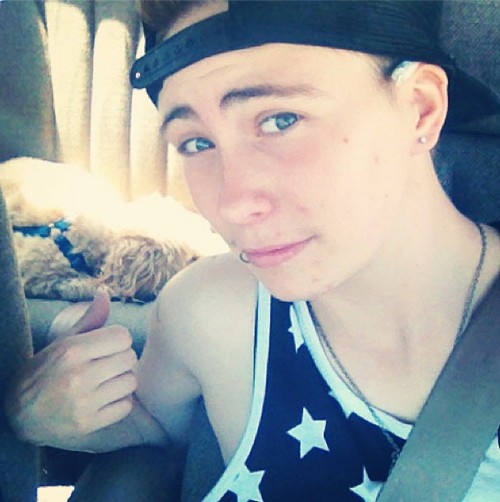 It has been a long and tedious process, but the American Idol Judges, Jennifer Lopez, Keith Urban, and Harry Connick Jr. are finally narrowing down the Top 30 this week on FOX. Last night on American Idol the remaining contestants each took a trip to the Judge’s Chambers to learn their fate, whether or not they would be sent home, or performing next week on the live American Idol Top 30 show. A lot of fan favorites got the axe, and a hand full of American Idol contestants made it through to the Top 30.

MK Nobilette, a 20 year old student from San Francisco, has stood out since her audition round and managed to survive the grueling American Idol Hollywood Week. Last night the judges revealed that MK Nobilette has been chosen to move forward to next week’s live show and perform with the Top 30.

MK Nobilette isn’t your typical American Idol contestant though, the young singer is openly gay, and proud of it. Last night on American Idol the judges expressed their concerns to MK about her being in the Top 30, they weren’t sure if “America was ready for an openly gay American Idol.” MK gave a moving speech to the American Idol judges regarding her thoughts on being the first gay American Idol singer. MK told the judges, “I am very obviously gay, and there are always going to be people in America, and around the world, who are going to hate. But, I think that in the last few years there have been a lot of things that have changed that, and have really made it a positive thing.” Jennifer Lopez agreed with MK, and stated “the world is changing.”

So, American Idol fans, do you think MK Nobilette has what it takes to make it all the way and be crowned the first openly gay American Idol?