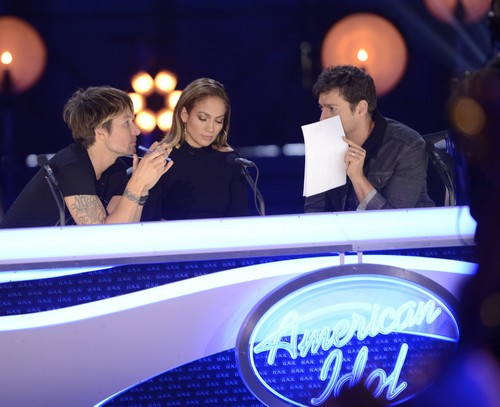 Tonight AMERICAN IDOL continues on FOX with a new episode.  Tonight’s show is the third night as the Hollywood round continues at the Dolby Theatre in Los Angeles, featuring solo and group performances by vocalists who passed the first rounds of auditions.  Did you watch last week’s episode?  We did and we we recapped NIGHT 1 and NIGHT 2.

On last night’s episode the group performances began in the Hollywood Round and you know that meant lots of drama.  The idol hopefuls who were still around broke up into 3-4 groups and at the end of the evening we were down to 77 contestants.

On tonight’s episode the Hollywood round continues and the group auditions are finished and the 77 remaining contestants will get one more chance to impress the judges with solos.  They will be performing one song and they will have to bring their all to move ahead to the live round.

Tonight’s show is going to be an exciting one, which I’m not going to miss and neither should you. So be sure to tune in for our live coverage of FOX’s American Idol XIII Hollywood Round Week 2  – tonight at 8PM EST! Celeb Dirty Laundry is your go to place for all the up-to-date American Idol News!

Tonight’s episode of American Idol kicks off with Harry Connick Jr. lecturing the remaining contestants.  He tells them that he doesn’t want to hear how sick or tired they are, they need to perform.  No more Mr. Nice Guy!  After this grueling week of Hollywood Rounds, the American Idol judges will have narrowed it down to the Top 30 contestants.

17 year old Emily Piriz will be singing for the American Idol judges first today, she will be playing her keyboard on stage while she performs.  Keith Urban thinks that she has a “beautiful voice,” and Jennifer Lopez thinks that Emily’s voice is “light and airy.”  It’s time for Emily to sit down with the judges and discuss whether or not she will be moving on to the Top 30.  Jennifer breaks the news to Emily…she has been selected to move on to the next round of American Idol.  Emily Piriz is in the Top 30!

Now, it’s time for “pretty boy” Spencer Lloyd to sit down with Jennifer, Harry, and Keith.  He was doing amazing during Hollywood Week, until he sang an original song for the judges, and they weren’t impressed.  Jennifer says that it was a “really really tough decision,” but they have decided to put him through to the next round.  Spencer Lloyd is in the American Idol Top 30.

Madelyn Patterson is the next contestant to head upstairs and discuss her fate on American Idol with the judges.  Keith says that Madelyn “has had some great performances, but unfortunately she has to say good-bye.”  Madelyn Patterson is going home, she is not in the Top 30 this year.

Sam Woolfe, of Boston, actually chose to sing an original song during his solo performance for the judges, unlike a lot of the original songs from the contestants, they liked his.  Sam Woolfe will be on next week’s live Top 30 episode.

Keri Lynn Roche is trying to stay positive, and feels confident going up to the judges after her solo round yesterday.  Unfortunately Keith Urban lets her know that she is going home, she did not make it into the Top 30 of American Idol.

16 year old Malaya Watson has has an emotional week in Hollywood, especially when Harry Connick Jr. interrupted her solo performance to tell her she was singing in the wrong key.  Despite her fears, Malaya is moving on to the next round of American Idol.  Malaya Watson is in the Top 30.

Detroit native, Maurice Townsend heads upstairs to find out whether or not he will be moving on to the next week of American Idol.  Keith thinks that Maurice is a “really good singer,” which is why he is in the Top 30 and will be performing next week on the live show.
It’s 16 year old Bria Anai’s turn to find out whether or not she will be performing next week with the Top 30.  Bria has nothing to worry about though Jennifer tells her that the judges “love her,” and she is in the American Idol Top 30.

Jessica Meuse has had a rough time at Hollywood Week after her disastrous group performance.  She decided to sing an original song during her solo performance to “try to redeem herself.”  27 year old Jesse Roach went with the classic song “Wide Open Spaces” during her solo round of Hollywood Week.  The judges are having a hard time deciding between Jessica Meuse and Jesse Roach.  Only one of them can go on to the next round of American Idol, and they sing so similarly, the judges want them to perform one more time so they can decide.  After they sing for the judges one more time, the judges have them leave the room so they can make a decision.  The judges have made a final decision, Jessica Meuse is in the Top 30.  Unfortunately Jesse Roach has been eliminated.

It’s time for Emmanuel Zidor to learn whether or not he has been selected to perform next week with the Top 30.  He is extremely nervous after his group bombed on Group Day.  Jennifer Lopez reveals to Emmanuel that he has been chosen to perform live next week in the American Idol Top 30.

24 year old Kristen O’Connor has been blowing the judges away during Hollywood Week, but she is still nervous when she heads upstairs to find out whether she is in the Top 30.  Jennifer Lopez says she “liked her last performance a lot.”  Kristen O’Conner is in the Top 30 of American Idol.

Leah Guerrero and Andrina Brogden have been asked to come talk to the judges together.  Jennifer Lopez breaks the news to them, Leah has been eliminated, but Andrina Brogden is in the American Idol Top 30.

It’s time for 21 year old Malcolm Allen to find out whether or not he will be moving on to the American Idol Top 30.  Harry Connick Jr. was concerned that Malcolm wasn’t “really marketable” but Jennifer says that she “remembers him every time.”  Harry tells Malcolm “on behalf of this panel I would like to let you know you have made it to the Top 30.”

CJ Harris and Casey Thrasher both hail from Alabama and have become friends throughout Hollywood Week since they have so much in common.  The judges have asked them both to come up together to find out whether they are in the Top 30.  They wants CJ and Casey to both sing one last time so they can make a final decision.  Unfortunately we won’t find out until tomorrow night whether CJ and Casey are in the Top 30.