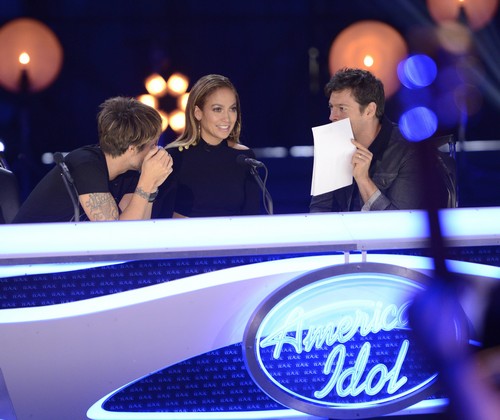 Tonight AMERICAN IDOL continues on FOX with a new episode.  Tonight’s show is the second night as the Hollywood round begins at the Dolby Theatre in Los Angeles, featuring solo and group performances by vocalists who passed the first rounds of auditions.  Did you watch last night’s episode?  We did and we we recapped it right here for you.

On last night’s episode the Idol hopefuls learned there was a new twist.  Those who proved they had what it takes to move forward in the competition thought they were headed to the “Hollywood” round. But, even before they unpacked their bags, the contestants learned they must compete in a surprise “Hollywood or Home” round.

On tonight’s one hour episode the group performances begin in the Hollywood Round and you know that means lots of drama.  The idol hopefuls who are still around will break up into 3-4 groups. Check out the sneak peek of tonight’s episode below.

Tonight’s show is going to be an exciting one, which I’m not going to miss and neither should you. So be sure to tune in for our live coverage of FOX’s American Idol XIII Hollywood Round Week 1  – tonight at 8PM EST! Celeb Dirty Laundry is your go to place for all the up-to-date American Idol News!

Tonight’s episode of American Idol starts off the morning of Group Day. The remaining American Idol Contestants have been up all night planning their group day performances.

The first group to take the stage calls themselves 3 More Days, and id made up of Sarina Joi Crowe, David Oliver Willis, and Tony Foster Jr. Ironically all three of the singers have already been to Group Day during previous auditions of American Idol. Jennifer thinks that their harmony at the end gave it a uniqueness, and individually she thinks they all had great moments. The American Idol judges have decided to eliminate Tony Foster Jr. David Oliver Willis and Sarina Joi Crowe are moving on to the next round of American Idol.

The next group to take the stage, made up of Casey Thrasher, Dexter Roberts, and Ben Briley, they are singing an interesting country rendition of an old Backstreet Boys song. The American Idol judges decide to keep all three of the Backstreet Cowboys. Casey, Dexter, and Ben are all going through to the next round of American Idol.

The next group that takes the stage is made up of Spencer Lloyd, Megan Miller, and Alyssa Siebken. Spencer already knew the song, so he didn’t really want to rehearse with the girls the night before, and it shows. They bombed their Group Day performance. Spencer and Megan are safe, and they are moving on to the next round of American Idol. Alyssa Siebken is going home.

The next group to take the American Idol stage is made up of Caleb Johnson, Tyler Ahlgren, Matthew Hamel, and CJ Harris. The judges think that Caleb owned the performance, but it wasn’t CJ’s best performance. Tyler and Matthew are going home, CJ and Caleb are moving on to the next round of American Idol.

The next group that takes the stage on Group Day is made up of Jena Asciutto, Sikenya Thompson, Allie Odom Sikenya Thompson caught the flu the night before, and decided to perform during Group Day anyways. Despite her sickness Sikenya has made it to the next round of American Idol. Allie Odom has been eliminated though.

The next group to take the stage is Terrica Curry, Carmen Delgina, Emmanuel Zidor, singing a bizarre rendition of Destiny’s Child’s “Say My Name.” The judges aren’t too impressed. Harry actually describes their performance as “terrible.” The judges decide to put Emmanuel through to the next round, Terrica and Carmen have been eliminated.

The final Group Day performance takes the stage. Christina Collins, Olivia Diamond, Queen Bulls, and Malaya Watson wait for the judges’ decision. Harry, Keith, and Jennifer decide to put all four of them through to the next round of American Idol.

There are 77 American Idol contestants remaining in the competition, and next week they will each have an opportunity to sing one more solo for the American Idol judges before they make another round of cuts.