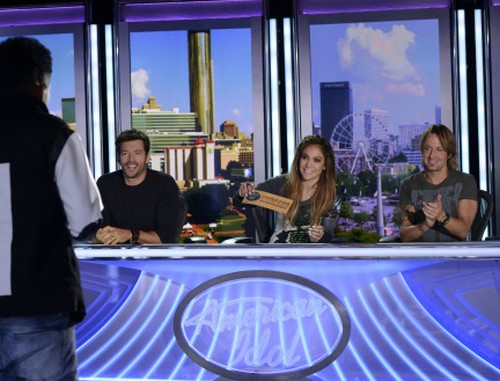 Tonight AMERICAN IDOL continues on FOX with a new episode.  Tonight’s show is only a one hour episode as the auditions continue in Omaha.  Did you watch last night’s episode?  We did and we we recapped Salt Lake City, Utah right here.

On last night’s show the auditions continued in Salt Lake City and this continues to be the best season of Idol in a long, long time.  Harry Connick Jr. is shining as one of the better decisions, he is real crowd pleaser.  Not only is the format of the show doing better but the ratings are rising, good new for FOX.

On tonight’s episode it is the final audition show and after tonight’s auditions in Omaha we are headed to the Hollywood round.  The Omaha auditions were held at the CenturyLink Center and 4,000 Idol hopefall showed up.  So far in the competition, 190 people have made it through. Overall, it looks like maybe 220 or so will go to Hollywood.

Tonight’s show is going to be an exciting one, which I’m not going to miss and neither should you. So be sure to tune in for our live coverage of FOX’s American Idol XIII Omaha Auditions – tonight at 8PM EST! Celeb Dirty Laundry is your go to place for all the up-to-date American Idol News!

The first contestant to audition in Omaha is 21 year old Quaid Edwards. Quaid’s mother is country singer Jolie Edwards, who you used to tour with Keith Urban many years ago. The judges aren’t completely sold on his talent, but Quaid guarantees them he has a “good work ethic.” The American Idol judges agree to give Quaid another shot, and give him a Golden Ticket to Hollywood.

20 year old Alyssa Siebken is singing an acoustic version of Waka Flaka Flame’s “No Hands.” Jennifer was impressed with Alyssa’s stripped down version, Harry wasn’t a fan of it though. Keith breaks the tie and votes “yes.” Alyssa is getting a Golden Ticket to Hollywood.

25 year old Tyler Gurwicz is the next contestant audition for the American Idol judges in Omaha. Keith thinks Tyler has “a really great voice, but it is hard to watch him because he looks angry when he sings.” Jennifer votes “yes,” and Keith votes “no.” Harry Connick Jr. votes “no” as well. Tyler begs for a second chance, so Harry tells him to sing a different song. Harry caves and agrees to send him to Hollywood for the next round of auditions.

20 year old CJ Jones has decided to sing “Stand By Me” for the American Idol Judges, and they are pleased (especially Harry Connick Jr). CJ Jones is getting a Golden Ticket to Hollywood.

Paula Hunter, is a singing for the US Army, but today she is auditioning for American Idol. She has decided to sing “All I Can Do Is Cry” by Etta James for the American Idol judges. Jennifer thinks that Paula has “such a talent that hasn’t even began to blossom.” Paula Hunter is getting a Golden Ticket to Hollywood.

18 year old Andrina Brogden has decided to sing Beyonce’s song “Halo” for the American Idol Judges. Jennifer thinks Andrina “has a really beautiful voice, but she is singing with fear.” Harry disagrees with Jennifer, Harry doesn’t think she is good enough for American Idol. Kevin thinks Harry is wrong about Andrina though. It is 2-1, Andrina is getting a Golden Ticket to Hollywood.

20 year old Christian Scholl is singing “On The Road Again” for the American Idol Judges. Unfortunately he won’t be on the road to Hollywood any time soon. Jennifer, Harry, and Keith don’t think he is ready for a Golden Ticket.