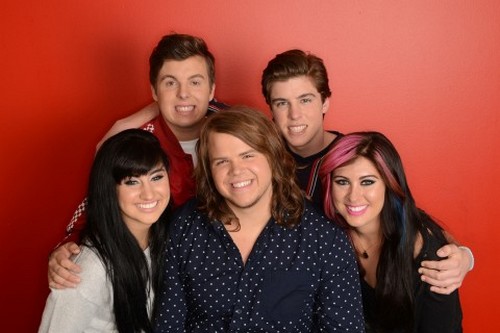 On last week’s performance show the top 6 finalists took the stage in hopes of impressing the judges and winning America’s vote. The Top 6 — Jena Irene, Caleb Johnson, Jessica Meuse, Alex Preston, Dexter Roberts and Sam Woolf had to tackle a country and rock and roll song.  On the results show we said goodbye to CJ Harris. Did you watch last week’s episode?  We did and we recapped it right here for you.

On tonight’s episode The Top Five finalists take the stage in hopes of impressing the judges and winning America’s vote! Tune in to see who amazes the judges and who falls flat in the all-new “5 Finalists Perform”. In tonight’s “America’s Request” evening, each of the finalists will choose two songs to perform from the many thousands of requests tweeted to them over the past few weeks.

Judges Comments: Keith – “Go Alex! How was it working with Jason it was pretty cool watching you to work together?  You have such a strong stylistic presence, onething I wouldn’t have minded was a bit more soaring with the vocal.  Give us some of that too, good job Alex.”  Jennifer – “You’re face was like beaming and so excited to be there.  I could see why America chose this song for you, I agree with keith I do wish you had pushed it more and made it a little more exciting.  That’s what you gotta think about as the show leader.  Now you’re up against the big boys now.”  Harry – “I think you’re one of the big boys too.  I can tell you’re really into lyrics, you sound similar to Jesse Rutherford from The Neighborhoud, and that song is really popular right now.  I could hear you like on the radio.  I thought that was a strong opening for the show, nice job”

Judges Comments: Jennifer – “Caleb I always start when it’s you.  That was a challenging song for you wasn’t it?  You sang it beautifully and amazingly, when Steven Tyler sings it he screams, but you took it to a ballad.  What you did was really make it Caleb.  I think you did a really beautiful jo, especially towards the end of the song you started to soar.”  Harry – “Every week you show us that you have a strong voice.  For me personally, you were looking straight down the camera and you followed it.  You really need to preach to the people in the room.  When you started the song off looking into the camera, it took away from that.”  Keith “I just want to say that was  a great song for you, your ability to perform is great.  Now we gotta figure out how to get you to the next level.  You have an incredible ability.  Your skills are the front, and your feelings are behind it, you gotta flip that.  Know what I mean? Then it will really open up.”

Judges Comments: Harry – “Jess, I think they liked it.  So, the coolest thing about you working with Jason is you never knew how much went in to performing.  I think you were thinking about all of the input you have gotten, my favorite part of the performance is it is obvious you really listened.  There were some pitch issues, but whatever.  You were really focused on the meaning of the song, it wasn’t my favorite performance of yours, but you take our comments seriously.  Nice job.”  Keith – “All I think you need to do Jess is, my favorite part of the song was halfway through the song when your voice cracked.  That was a good moment.”  Jennifer – “Okay, what I saw, which I do like is that when you do tap in to the feeling and the emotional part of the song, something happens.  It’s all about what comes from inside of you.  When you were singing that song and you stopped and came back in, you got lost in how you felt and it gave a great dramatic moment.  Those are the things about performing that you are finally beginning to tap in to.”

Judges Comments: Keith – “When Ariana came out you were as red as the coke sign behind you.  That’s a tough song, it wasn’t in your wheel-house, but you did as good as you could on that song.  It’s a tough song.”  Jennifer – “I like to see you relaxed and moving around, maybe Ariana did have something to do with that.  But, I did feel you relaxed and I liked that.  You said you were going to get more funky, and for Sam you were funky.”  Harry – “The part for me is you did something out of character, you’re more of a melody singer.  When you have a band behind you that is plugging that hard, and you are hanging back you are actually diffusing the funk.”

Judges Comments: Jennifer – “Jena you sounded really good as you always do.  What I like that is coming together is kind of your signatures, it’s classic and something that’s coming together.  You evne have a signature phrase, “C’mon Let’s Go.”  I see it coming together, it’s exciting to watch.”  Harry – “I think you might be surprised by how much those little things help you in the long run.  Every one of you is a completely different performer, but you probably move more than the other remaining competitors.  I think that’s huge, and you use the stage.  That glow stick thing, it may be silly, but that’s memorable.  We all know you all sing great, watching you do the other stuff is really fun and it feels like a performance.”  Keith – “What I love about you is you’re a lean in performer, and you also write songs and play the piano.  It’s really killer, great job.”

Judges Comments: Harry – “Alex one of the things I like to see the most is a performer struggling with the emotion of a song and not giving into it.  It’s one thing to weep and sob and to watch you fight for it and not give into was wonderful.  For me that was the performance of the night.”  Keith – “I want to say a huge thank you to everyone in America that suggested that song.  It was absolutely beautiful.”  Jennifer – “I would just be saying the same thing, but I also loved the way you look.  The way they lit you, the whole thing, the whole vide, it was a really beautiful performance.  Congratulations.”

Judges Comments: Keith – “Jena, I loved that song but there is another version that I really love and it’s got more tempo.  Having said that, I think your vocals are killer and you really suit that song.”  Jennifer – “You always kill it for me Jena, but again the tempo of that song and the arrangement weren’t you.  It wasn’t my favorite performance.  I have seen Amy Winehouse do it and she killed it, and again with the tempo.”  Harry – “For me it wasn’t your worst performance and it wasn’t your best.  What do you want to be known as once you move on from American Idol?  You’re already in the Top 5.  It was a nice job tonight”

Sam Woolf is singing “How To Save A Life” by The Fray. [VIDEO HERE]

Judges Comments: Jennifer – “I’m not going to lie when you started off it was a little bit shaky in the beginning.  And then you seen why America wanted you to sing that.  When you hit the sweet spot in your voice everything melts.  Second goosies of the night.”  Harry – “There were some pitch issues, there is still a dynamic issue with it Sam.  The last line of the song had a little bit of a break in your voice, a little bit of a cry.  I wish it had been like that the whole song.” Keith – “You’re right the dynamics are a key thing.  When you hit the middle you hit a new place and you really began to sell the song.  By the end you had me.”

Judges Comments: Harry – “So I think the people in America watching America Idol really care for you, because that’s such a perfect song for you.  It’s a perfect song for you.  And, for the millions of people that love that song  they can download your version.  I love when that happens it was just a perfect marriage of voice and song.  Congratulations.”  Keith – “I love that song, it was a good song choice for you.  You got that in your tone and your range, you got a deep tone in your register.  All I ask Jess is if you could just emotionally and dramatically lean in to your song.”  Jennifer – “I have to say that same thing as Keith, when you started off and you were profiled and then the song came in, it felt like it was going to go somewhere.  It left me a tiny bit cold, I want you to dig in more, performance wise.”

Caleb Johnson is singing “Still of The Night” by Whitesnake. [VIDEO HERE]

Judges Comments: Keith – Dude that was killer.  I just love when you do those tender balads like that Caleb.”  Jennifer – “That’s what we call bringing down the house.  And I love the band they perform with you.  They can not wait!  They know they got a real lead singer up there, it’s sickening, it was crazy!”  Harry – “When Cole Porter wrote in the Still of The Night I never thought I’d hear it like that.  You can’t sing that song any better than that’  Congratulations.”