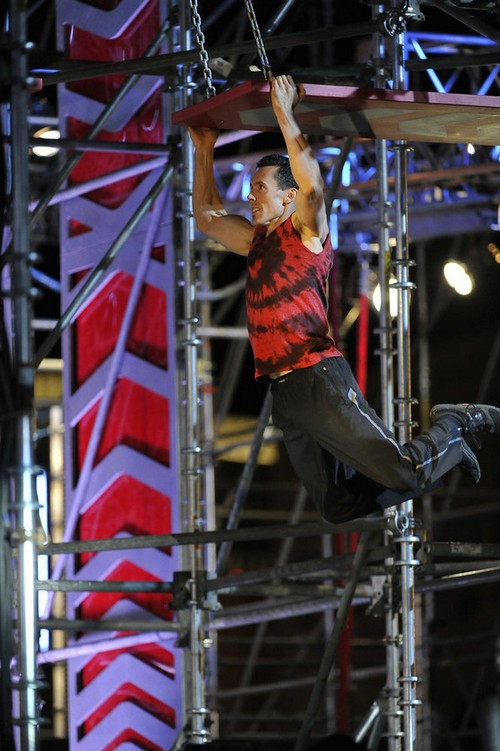 On the last episode of “American Ninja Warrior” the finals of American Ninja Warrior continued from Las Vegas, Nevada where the top finishers from the regional finals tackled the ultimate challenge – a four stage course modeled after ‘Mount Midoriyama’ in Japan. Competitors attempted Stage One, with new obstacles the Piston Road and Silk Slider. Did you watch the last episode? We recapped it all right here for you.

On tonight’s episode, it’s the final night of the “American Ninja Warrior” Las Vegas finals where the top finishers from the regional finals tackle the final stages of ‘Mount Midoriyama’. If any competitor makes it through to Stage Two they will face new obstacles the Rope Jungle and Butterfly Wall. In Stage 3, they will be up against new obstacles the Cannonball Incline and the Propeller Bar. Lastly, if a competitor survives all three stages, they will attempt Stage 4 with a cash prize of $500,000 at stake and the title of “American Ninja Warrior.” Matt Iseman and Akbar Gbaja Biamila host and Jenn Brown co-hosts.

RECAP: We are now on the second stage of mount midoriyama, they have to cross the six obstacles ; rope jungle, double salmon ladde, the butterfly wall, the metal spin and to the wall lift. Who ever finished slower before has to go first while the fastest go last, now up first it’s J.J. Woods and he went to achu Picchu to prepare for this; he trained in the mountains and the elevation really made it hard for him. J.J. makes it through the rope jungle, he’s struggling a lot but he makes it through. Now J.J. is on the double salmon ladder and he drops instantly; he spent too much time on the rope jungle.

Next up is Brian Arnold and is the only man to get close to finishing the competition , he trains with his three other friends; they are a ninja wolf pack that work hard and push one another to their limits. He rushes right across the rope jungle and makes it through. Now the double salmon ladder wher ehe sturggles a bit; now to the unstable bridge and falls right into the water. He spent too much time on rope jungle and made his arms give out.

Next up is Yen Chen, who decided to train hard after his mothers passing; he worked hard to dedicate himself to making himself a better person. Him and his twin brother are best friends; until high school they kind of drifted apart though they have reconnected. They have been great friends now and might one day compete as well. Yen goes onto the rope jungle and rushes right past it. Now to the salmon ladder which he completels perfectly, now onto the unstable bridge; he makes it past really fast. He sadly falls on the butterfly wall, he had a huge height disadvantage.

Now is Noah Kaufman, an ER doctor and loves training; he had to really sell it to her. She thinks it’s nothing but an ego boost, though Noah feels it’s incredibly healthy and a great lesson for not only himself but for his kids; it’s a great life style. Noah gets on to the rope jungle and crosses it fast; now onto the salmon ladder he gets up it fast and makes it to the unstable bridge but fails on the transition.

Dan Galinczynski next and his whole family is here to watch; Dan is now going pass the rope jungle fast, he’s now on the salmon ladder and is now on the unstable bridge; though he can’t make the transition.

Next up is Ryan Stratis,he has been so happy tom ake so many friends this year and has a lot of passion for American Ninja Warrior, he gets onto rope jungle and hits the salmon ladder and now onto the unstable bridge and makes on to the butterfly wall and is the first one to make it through. He accidently hits the water swinging across the water

Next up is Andrew Lowes, he gets across the rope jungle fast and hits the salmon ladder and gets to the unstable ladder fast; though gets through it easily. Now to the butterfly wall and crosses it and fails.

Up next is Isaac Caldiero and he’s confident about stage two; he’s prepared for it big time. He’s built last years stage three in his parents backyard to train. Isaac gets right across the rope jungle fast incredibly fast. Now at the salmon ladder he fails; he made a little slip up that ruined it all for him.

Next up is Jo Jo Bynums, he rushes right across the rope jungle and is on the salmon ladder; though misses his grip on the unstable bridge. The safety crew had to rush in and save him, he struggled to swim as he hit the water.

Next up is Abel Gonzalez and he is a walk on that waited for like 4 days; he has arthritis when he was younger and he did not except that he’d live llike that. He has studied nutrition to make himself better and that he didn’t have to accept being told he’d be in a wheel chair. He ruhses onto the rope jungle, but striggles on it a lot but makes it through, now to the salmon ladder where he fails.

Travis Rosen just turned 40 so his window of opportunity is closing in; he’s at the top of his game now but has no idea how long that will last. He wants to go all the way this time around. He hits the rope jungle and swings by it really fast ; now to the salmon ladder; now he’s on the unstable bridge which he completes super fast. Now he lands the butterfly wall and makes the grab to the rope and climbs up, now to the metal spin; where he fails .

Next up is Chris Wilczewski and his friend Mikey is an autistic kid that love American Ninja Warrior; he got him to come out and is happy to have raised the money to have Mikey come down. Chris runs and swings right past the rope jungle fast. Now to the salmon ladder which he completes fast and hits the unstable bridge which he rushes right past fast. He now gets to the butterfly wall and lands it; then climbs the rope to finish it. Now the metal spin and sadly drops.

Up next is Josh Cook, he is a floor installer; it helped him training because he has to stay active all day. He gets to the rope jungle, he takes his time crossing and hits the salmon ladder. Now on the unstable ladder and he makes it. Now to the Butterfly wall and he gets no height and hits the water.

Next up is Ian Dory, he lives on a farm and is one of the top rock climbers in the world; he hits the rope jungle and gets through it fast and hits the salmon ladder, he takes his time up it and is now on the unstable bridge; he clears the transition and makes it across. now to the butter fly wall and makes the jump; now to the rope he climbs up and is at the metal spin where he hits the water.

Next up is Joe Moravsky, he is a weather man and last season; he doens’t have a perfect chiseled body though he has a strong body. Joe hits the rope jungle and makes it through pretty easily; next up is the salmon ladder and he makes it fast. Now to the unstable bridge, now at the butterfly wall Joe lands it and now hits the rope. Now Joe rushes to the metal spin, he lands it now he hits the wall.s and is the first one to complete the course.

Next up is Paul Kasmer and he has been given the name mister consistancy, since he is a very consistant athlete; he was very inspired to come back this year and he’s happy to be here. Paul hits the rope jungle and swings across really fast and now hits the salmon ladder; which he gets through fast. Now he’s on the unstable bridge but falls down.

Next up is Lorin Ball, he is a break fancer; he has been doing it for six years now and start it with some friends though also started doing parkour as well. Lorin hits the rope jungle; he spent way too much time on the jungle and his chance of fnishing is slim. Lorin is now going up the salmon ladder and fails.

Now it ‘s the final runner of the night Elet Hall, he spent a lot of his times out doors outside playing and just having fun; he used to camp as a kid and loved it. Money hasn’t motivated him at all in life, though he is here because he enjoys phsyical fitness. Elet hits the rope jungle fast and is on the salmon ladder now, he makes the transition and gets to the unstable bridge and lands the transition, he is now at the butterlfly wall and barely lands it; he now jumps for the rope and climbs up fast. Now he’s at the metal spinand lands it; he’s now at the wall and he rushes fast; he’s the second man to complete the course tonight.

Elet Hall is hitting stage three of Mount Midoriyama right now, he is prepared to make history; he is now on a cannon ball alley like course and hits the door knobs. He makes it past the first two obstacle and is on the floating doors and is transitioning super slow and holding on with all his strength; though sadly falls into the water.

Now it’s Joe Moravsky’s turn to take on the third stage of Mount Midoriyama, he wants to crush the floating boards which he failed on last year. Joe he is on the door knobs and gets right to the floating boards fast, he’s on the last board and completes it; passing his failure last year. Now Joe past the cliff hangar and is at the propellar and grabs the rope’ he is now on the hang climb where he falls into the water.