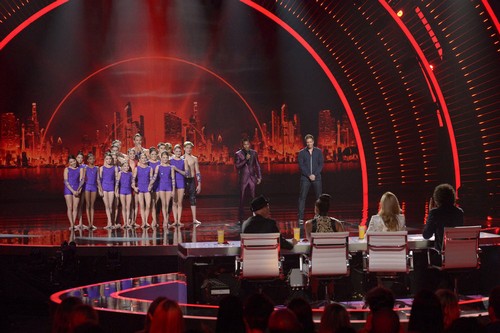 Tonight on NBC their hit reality talent show AMERICA’S GOT TALENT returns for the sixteenth episode in its ninth season and the Quarter finals continue as twelve more acts perform at Radio City Music Hall in New York City.

On the last episode, the votes were in and five acts from the previous night’s performance show moved on to the semi-final round of competition. Nick Cannon hosted this variety competition series which featured a colorful array of performers hoping to be named the most talented act in America. The 5 acts going on to the semi-finals were: Paul Ieti, Blue Journey, Sons of Serrendip, Christian Stoinev and Acro Army! Did you watch the last episode? If you missed it we have a full and detailed recap, right here for you.

On tonight’s show, judging is turned over to the American viewing audience as the last twelve of the Top 48 acts perform live at Radio City Music Hall for the chance to win the $1 million prize and become the most talented act in America. Starring celebrity judges Howie Mandel, Mel B, Heidi Klum and Howard Stern. Hosted by Nick Cannon.

RECAP: First up tonight is Bad Boys of Ballet, their choreographer was gone working in Japan for a while so they seriously had very little time to work together; she is a very strict leader and the boys always follow her. Mel B says she loves them, their energy and elegance is through the roof; it was stunning. Howie says that the bar is so high right now, he doesn’t see bad and edgy; it needs more bad in it. Heidi says that she loved it and her kids love ballet, she knows they have been inspired by their performance. Howard says they are wonderful dancers and says that Howie is more right; they need to something so different and this felt like this was more background dancing than anything.

Next up is One Voice Children’s Choir, the choir is so close together; all the kids are very good friends. Their director helps them compose the songs and for the kids his choir is a place they can come to so they can feel accepted; the kids are comfortable and confident that they can amaze the judges and America. They want to prove to Howie that they are diamonds.

Howard says that he is a big fan of them and honestly believes this is a tough competition; he doesn’t feel like they did enough. Howie says that this song will help them go through because of their love for it, he actually enjoyed it. Heidi really liked it and loved how they filled the hall with their voices. Mel B says that she was worried about them, though they really did step it up this time around and it was beautiful.

Next up is Jonah Smith, he is 39 and he sells insurance; but at night he’s a piano playing rock and roll band. He’s been playing music since he was 18 and has been on many gigs; he sold insurance since he got married and needed stable income. his wife supports his music and hopes for his success.

Howard says that singers come and go, he can’t even remember what they do; though he remembers all of Jonah’s performances. He moves people and knows that no one can bring the emotions out like he does. Heidi says that she hopes America to vote for him, he truly deserves to be here. Mel B loves that song and loved his rendition, she can really feel how badly he wants it.

Next up is Dom The Bomb Triple Threat, they are triplets who help Dom live his dream using cards as his trick; he likes slicing things with them. Their parents are so impressed and proud of their three kids. Heidi says that this is encouraging bad behaviour, though it was really fun to watch. Mel B says that she thinks they are adorable being together; though tonight had a little too much going on. Howie says they had to add some of the missing parts of the act, though he loved their act. Howard says that he doesn’t want to be the mean judge, though this is an act that believes it’s see better days and wasn’t crazy about it.

Next up is Extreme and their dancer instructor is like a mother to them, she helps them out all the time and makes them passionate about their art; they want to not only succeed but to make her happy with their performances. Heidi says they were dynamite and took it to a whole new level. Mel B says the first time she was so in love with the act, though felt it was all very out dated and not pushed hard enough. Howie says he loved it and really enjoyed the whole performance, Howard says that he loves the dance categories and feels like many dances have more unique elements to them.

Next up is Emil and Dariel, their grandfather was an incredible chello player back in his home country; he knows that in America if you work hard dreams will always come true. The boys really appreciate him and the fact they were given chellos, they want to make their grandfather proud. Howie says he was amazed by their passionate act, he felt their power. Howard says he finds this act memorable and something he’d love to see again; it was a beautiful story and act. Heidi says that she loves how they brough chellos to a whole new level, Mel B says that it was off the chain; she absolutely loved it.

Next up is Nina and was amazed by the circus, she took ten years in ballet and at 30 she went to China to learn contortion and trained 8 hours for 6 days a week, it was a huge risk but loved taking it and being where she is right now.

Howard says that her personal story is inspiring knowing she just went off at 30 to learn what she loved, he can’t believe how beautiful she is performing. Heidi says that she was incredible and wasn’t sure if it is big enough for this room. Howie says it was graceful and very sexy, he loved it a lot.

Next up is Quintavious Johnson, he’s been singing since he was 11 months old; he would just start humming tunes with his mom. He sings all times possible in his life, he absolutely loves it; he appreciates all his mother’s efforts as a single parent raising him and his brothers.

Heidi says it was amazing and doesn’t know what to say; he had the whole package and was incredibly powerful. Mel B says that she can’t believe what just happened, he has such an incredible gift; it was the loudest cheering of the night from the audience. Howie says that at this moment he should think what he’s going to do with the million dollars. Howard says that he should worry for puberty, he’s got an amazing voice; what they witnessed was freaky. It’s a phenom and he feels like they discovered true greatness.

Next up is Moth Men and they try hard to bring their wires with dancing, giving it a very brand new feel mixing two different thing together. Mel B says it was repetitive and wasn’t too amazed. Howie loved it and can’t understand why Mel hated it. Howard says they were interesting fun and delivered a different act. Heidi says that it’s clever what they do, she believes their choreography needs to be more accurate.

Next up is Smoothini and his block was his family, when he was younger he’d do magic on the street corner doing magic with anything he could get his hands on; he always loved magic and did it at 16 at bars. He joined the marine corps and did magic for the others there, he believes he has truly mastered his craft.

Heidi says that she isn’t sure about it, she loves him but the act feels very small. Mel B agrees and says it was small; he needed an act that could have been more big. Howie says it was amazing and that America should surely vote. Howard says it was a mess, he blocked them out and it was like they were at a bar with the worst seats in the house; he felt like the audience was left out.

Next up is one of the most dangerous acts of the show by Jonaton Requelton; he’s a fifth generation circus performer. His whole family was part of the circus and was taught by his father how to perform, he never uses nets or safety lines; he prepared something very dangerous.

Mel B says that she was so shocked, it was an emotional roller coaster if he’d live or not; it was so terrifying and that’s what the show is about. Heidi says she was so nervous of how he did that on such an unstable platform. Howard says he’s seen people fall and that he is so incredible, the stage keeps them engaged and that it was a fantastic act. Howie says that at he was so excited about tonight, the fact that he puts more danger into it is just crazy; he loves the thrill he delivers in the act.

Next up is Kelly Glover and has sung everywhere, she absolutely loved it with a passion; she wanted to pursue her dream. She auditioned years ago and when she got cut she was hurt so bad, she stopped singing and gave up on her dream; she always dreams of being on stage to sing her heart out.

Heidi says that she was the last act of tonight and she gave them an unforgettable performance and truly gave it her all. Mel B says that it was off a little bit, but the chorus really brought out her strong voice. Howard worries about her because she wants it so bad that she tightens up, she gave it her all and good luck. Howie says she taught everyone to never give up and that she is a true inspiration.