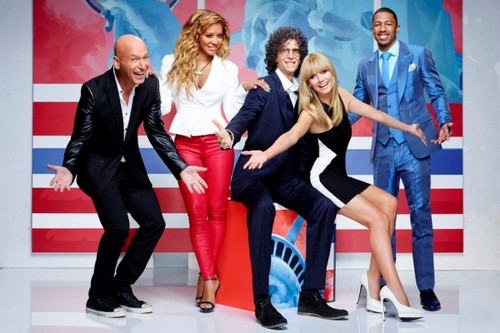 Tonight on NBC their hit reality talent show AMERICA’S GOT TALENT returns for the thirteenth episode in its ninth season and five acts advance in a results edition.

On the last episode, twelve more acts performed; one of them was this years youngest performer, Adrian Romoff who is nine years old and plays piano. He always tries to learn and teach himself how to understand things he doesn’t know. Adrian is considered a genius, though he knows he wouldn’t be where he is without his mother; music always makes him happy. All the judges loved his amazing performance.  Did you watch the last episode? If you missed it we have a full and detailed recap, right here for you.

RECAP: We take a look at how Mel B was shocked last night by Mike Super, she really did not like it and says that her butt is sore from it; Nick says it was very entertaining. We now get a complication recapping all the performances we saw last night and what they are being judge on by America; last night was possibly the greatest show of America’s Got Talent yet.

Now we take a look at the Reddi Whip after party, Nick goes around talking to the contestants all around asking them about their performances and having a good time. The next act going into the semi-finals is Blue Journey with their amazing dance performance that left the judges speechless, Heidi says that she is not surprised since they were one of the best acts last night and can’t wait to see what they do next.

We know how some fans at home who want to call and ask the judges their questions, a woman named Diana asks how it is to sit in between Howard and Howie to Mel B and Heidi. Mel B says it’s annoying as hell. Zack asks Mel B what exactly does off the chain mean, Mel B says it’s as if she is super excited about the act and how amazing it is. Al asks what they have done for the people, Howard says that Al has to eat a sandwich since he’s fading away; he says he’s good to all of his people like Kim Jong Un.

The next act going on to the semi-finals is Paul Ieti with his passionate song last night that won America’s hears, he can’t believe it at all and feels like it’s unreal. Howie says that he is feeling good and says that he without a doubt strung a cord with America and got himself here.

Now we see comedian Taylor Williamson who was the runner up last year for America’s Got Talent, he was super close to winning the show and getting one million dollars. Heidi did a video with Taylor and it was her dreaming about their relationship together.

We now see Kenichi Ebina the winner of last years show, he’s been all over the world and he is creating an act to have others dance for him and he’ll do the easy work. Kenichi is now performing on stage.

There are two spots left for the semi finals, the next act going through to the next round is Christian Stoinev for his intense balancing act with his dog Scooby; Christian says he’s amazed and happy for all those who voted for him. Howard says that he was blown away from the last night and is glad that America got it right.

We now have three acts left, the act going home out of the three left is Adrian Romoff; now we are left with two acts. Acro Army and Mike Super; we get a look of their performances last night.

Heidi says that Mike Super is a great magician and blew them away, though thinks Acro Army is fantastic as well. Heidi decides she’s going with Acro Army. Howie says Mike Super amazed them, even though Howard gave him a hard time with the Desmond thing. Howie says that he’s going with Mike Super. Mel B says that it’s hard because both acts are different yet brilliant, she loved Acro Army and goes with them. Howard says that he loves Mike, though wasn’t crazy about last night; he decides to choose Acro Army.

So the 5 acts going on to the semi-finals are: Paul Ieti, Blue Journey, Sons of Serrendip, Christian Stoinev and Acro Army!