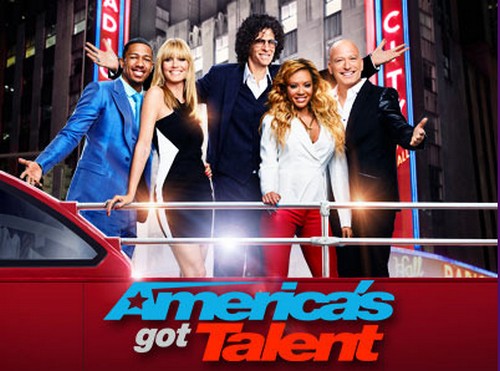 Tonight on NBC their hit reality talent show AMERICA’S GOT TALENT returns for the fourteenth episode in its ninth season where the quarterfinals continue and twelve of the Top 48 acts perform at Radio City Music Hall in New York City.

On the last episode, Andrey Moraru with his amazing balancing act made it into the semi-finals, Hart Dance Group and Darik Santos sadly went home. Aerial Animations also made it through, ActTwo had their final curtain call and was sent home as well. Did you watch the last episode? If you missed it we have a full and detailed recap, right here for you.

On tonight’s show, TWELVE MORE ACTS PERFORM LIVE FOR AMERICA’S VOTE AT THE WORLD FAMOUS RADIO CITY MUSIC HALL Judging is turned over to the American viewing audience as twelve of the Top 48 acts perform live at Radio City Music Hall for the chance to win the $1 million prize and become the most talented act in America. Starring celebrity judges Howie Mandel, Mel B, Heidi Klum and Howard Stern. Hosted by Nick Cannon.

RECAP:  Howie says he is looking to be amazed tonight and get excited; he wants to be entertained and goes ahead to mention that they must make reference to Robin Williams who was one of the greatest entertainers in this world. Robin Williams has a left a huge void in this world and hopes that there is talent that can fill it.

First up is Dragon House the Agents, they met 5 years ago and for their love of dance they just clicked instantly; they truly love what they do. They want to be dancers and know they are gambling with their lives right now without a back-up plan. Mel B says it was a great way to open up the show and she could see them at their show right now; they are really great. Howie says that it is exciting and it was really amazing. Howard says they are really great at what they do, though the problem is that he saw them a couple of times and it’s getting a bit similar; he wants them to make it more complex next time if they get through. Heidi agrees with Howard a bit, though does love them and believes they can bring a bit more diversity to the act.

Next up is Anna Clendening and she has a very bad anxiety disorder and it took a lot of her to bring herself up on that stage to audition, she is not sure how far she can go because she always stays in her room because of how badly her anxiety gets; it scares her a lot. Howie says that he feels so emotional right now, her story and what she did is amazing; her singing truly moved him a lot. Heidi says that she does feel the passion in her voice and hopes her journey will continue. Howard says he loves how she changed her look, he sensed a lot more passion in her other performances; he felt there wasn’t enough of a connection to the song.  Mel B loved the song choice and is very impressed with how she contained herself on stage.

Next up is Cordell Bhongra, they are students who took their studies very seriously; though when they do Bhongra they give it their all. They could not believe they were chosen to go to the live shows, they are so excited to be performing live on stage. Heidi says that this was so much fun and felt like it was a fusion of Bollywood production with Hip Hop; she loved it. Howard says that he is shocked no one didn’t fall off the stage, though he thought they have an advantage coming out for the first time and loved their act very much. Mel B says that she was scared, though made her so happy watching them; that was off the chain. Howie says that it was exciting and unexpected, he loved how they mixed it up a bit.

Next up is Kieran and Fininan, they started playing instruments when their family toured around the world in a RV; their father has been telling them to always achieve their dreams. Their father has been diagnosed with cancer and they want to make the last days of his life amazing, they want to make him proud of their success. Heidi says that they took such a vibrant pop song and made it less fun; she loves the song but felt that the last 20 seconds was only good. Mel B says she loved it because they made the song their own, it started small and made it big. Howie says that on these lives shows their act just didn’t follow up well, it was very low key; though does believe they are very good. Howard felt it lacked something, but loves how they take risks; he enjoys seeing them on stage.

Next up is Mike Super he’s a normal guy and takes care of his children, though uses his spiritual power that is Desmond; nobody can see Desmond. His wife is asked about it and they have light bulbs flicker on and off; some even explode. If Desmond doesn’t show up then there is no act. Howard says that he hates Desmond, he doesn’t like him and that Mike doesn’t need him; he loves his act though. Howie says that it was amazing, he says guys are going to try figuring out that stuff. Heidi says she liked it a lot and has no idea if it was a lucky guess, though said the ash in the hands was fabulous.

Now is this years youngest performer, here is Adrian Romoff who is nine years old and he is a piano prodigy; he always tries to learn and teach himself how to understand things he doesn’t. Adrian is considered a genius, though he knows he wouldn’t be where he is without his mother; music always makes him happy. Howie says he is a phenom, all he does is amazing; his playing with it’s passion and emotion is incredible. Howard says that he reminds the audience that this is a 9 year old and has no idea what he is; he’s so talented. Heidi loves watching him and feels like he is so funny as well. Mel B says that he didn’t realize how entertaining he is; Adrian answers that he does.

Next up is Acro Army and they are several acrobats who got together by their choreographer who was on season 1 of America’s Got Talent, the lost one of their best performers because of his work so Arthur who was retired is stepping in to help out the group. Howard says he loved them, they are true performers and they truly are exciting. Heidi says that this is exactly what she wants to see, their act had so many layers and it was amazing. Mel B says that was amazing, they made her panic because of how intense the act was. Howie says this is exactly what he likes, this is perfect for America.

Next up is Wendy Liebman and she was 6 years old when she started making people laugh, she started doing stand up in college and has been doing it for 25 years; her husband had two young sons when he met him. he now is a mom and is now time for her to pursue her dream, her family believes in her completely.

Heidi really loved her stream of constant delivery, it was insanely funny and lies about her age as well; she thought Wendy was great. Mel B says that finally a woman makes them all laugh from start to finish.Howard says she came out like a rockstar and did a great job. Howie says that he has known Wendy for a while now and she is truly hilarious.

Next up is Sons of Serendip, these four men came together; they love music and know they need to focus. They worry about their group, they want this to succeed more than anything they have ever wanted.

Mel B says it was just beautiful, she can’t believe how they haven’t been performing together for so long; it’s her favorite performance of the night. Howie says the intruments and the singing is so soothing, they made him feel so good when they perform. Howard says this is a strong night tonight, because they knocked it out of the park doing a beautiful job; he agreed with Howie. Heidi says they were an amazing class act.

Next up is Blue Journey, they haven’t been able to perform together a lot since they had other things going on; though they are sure that they can nail this performance.

Heidi says that she thinks it was a very sophisticated performance, she has never seen something so creative in a long time; it was very magical and amazing. Mel B says that it was so beautiful and captivating; she wants them to win. Howie says that they went on a journey with this performance, they can’t even describe the feeling he has now. Howard says it is very intelligent, they have such an amazing combination of dance and the video working with them at the same time.

Next up is Christian Stoinev and he was a circus performer, when he was 10 he got his little dog who is now 11; it’s his best friend and loves doing routines with him. They take care of each other, he’d love to understand what his little dog could think because he is never nervous performing.

Mel B says she was so scared for the dog in the act, she was worried he would fall; it was such an entertaining act tonight. Heidi says it was one of the best things she has seen in a long time, it was her favorite act. Howard says that this was by far his favorite of the night, he is such a talented man with a talented dog. Howie says that this is by far the best night of AGT ever and the hardest for America; there are so many good acts.

Last up tonight is Paul Iedti, he is a veteran of the army and the last time he saw his family was before he left for the army; he hasn’t seen them in several years and it really upsets him. He loves singing and sharing his voice with the world, music truly saved him and wants to make his family proud. Heidi says it was a very emotional performance and a good job, Mel B says that it was perfect to end the night; he sings with such passion and commitment. Howie says that he just gave America a very tough choice. Howard says that it has been an incredible night, he says that tonight is super hard and has no idea who is going through.