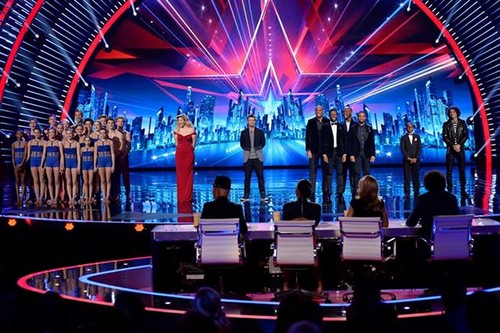 Tonight on NBC America’s Got Talent returns with an all new Wednesday September 17, Season 9 finale.  On tonight’s episode the winning act is revealed in the Season 9 finale, which features performances by music guests.

On last night’s episode the final 6 acts performed for the final time to win the $1 million prize and become the most talented act in America. Each act debuted a new routine and reprised a favorite past performance. The judges give us some brief preliminary thoughts, and just like that the performances began.  Did you watch last night’s final performance show?  If you missed it we have a full and detailed recap, right here for you.

On tonight’s episode host Nick Cannon will reveal who has been chosen as the most talented act in America and award the $1 million prize in this special 2-hour finale show. The evening will include special performances by star-studded musical guests including Ed Sheeran, Cyndi Lauper, Pitbull, Jennifer Hudson, Lenny Kravitz, Travis Baker, Train and more.

Heidi says that America must have had a sleepless night, they final 6 this year are by far the best acts; anybody could win tonight. Opening tonights show is Pitbull and the Rockettes with his single “Fireball”.

Next we see a complication of last nights acts, reminding us of the insanely hard choice America had to vote upon; anybody can win with the amazing talent the finale is filled with this year.

Now we get a look at the Reddi Whip after party where Nick went to hang out with all the other contestants; he talks to Mat Franco who says he knows most of the money he wins will go back to Radio City for knifing their chair. All the finalist will be performing tonight, we start off with Sons of Serendip and Train.

Next up is Acro Army performing with drummer Travis Barker from Blink 182.

Nick asks why Mel B is in a robe now, her out fit earlier had a zipper busted of some sort; so they went ahead and gave her the robe as a replacement.

We now see Howie and Howard who have no way to describe season 9, the judges were very upset about that it’s coming to an end. Howard and Howie say the funniest moment of the season was Heidi falling out of her chair and Mel B getting electrocute on stage.

Next up with Miguel Dakota is Lenny Kravitz performing on stage with his brand new single.

Howard says that he loved their performance, he was very impressed with Miguel’s singing this time around with Lenny and even thought the band was very good as well; Howard says that he honestly hopes Nick wins an Emmy for being the best host. We know see a complication of Nick and why the judges believe he is the best; he has a lot of passion and is always willing to help out the acts with their performances.

Next up is Mat Franco performing with Howard Stern and a surprise special guest Rosie O’Donald.

We now get a look at the judges hanging out with all the acts back stage for the first time, taking pictures and just talking. Now it’s Quintavious Johnson performing on stage with Jennifer Hudson.

Next up is Emily West singing with Cyndi Lauper on stage.

Emily feels like she has won and can’t believe she has sung with such a legend, she is so happy; Cyndi tells Emily that she is great and surely deserves success.

WE now see a complication of all the acts we have seen this season and what led our current top 6 to get to where they are now; this year has been one of the most talented seasons of America’s Got Talent

The first act going home tonight and losing their chance to the million dollars is Miguel Dakota, he ends in 6th place; Miguel says that this whole experience has been amazing and life changing. It’s been an honor being with these judges, Howie says that being on this stage and show can still make his dreams come true.

The next act going home and finishing in 5th place is Quintavious Johnson, the crowd starts booing and are not happy about this result; they then cheer for how good he is. Quintavious says that being on the show has meant the world to him, he is so excited he got this chance in his life and is happy to have gotten into the top 6. Heidi says she is shocked and sorry for Quintavious not winning, though this is his stepping stone into becoming a star.

Next up performing on stage is special guest Ed Sheeran.

The next act going home tonight and finishing the season in 4th place is Sons of Serendip, the crowd is not happy about it though cheer for the talents men. The guys say that being part of the show has made them improve as a group and thank everyone for supporting them along this journey; they also thank the AGT staff. Mel B says that this is a big competition and is sad to see them go, she knows they can easily have a career; they can go ahead and create their own legacy.

The act finishing in 3rd place of this season and going home is Acro Army, they have been amazing with the insanely dangerous act and have always blown the judges away.