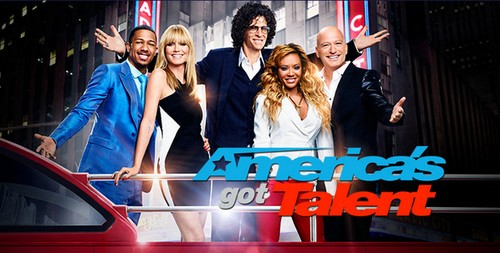 Tonight on NBC their hit reality talent show AMERICA’S GOT TALENT premieres tonight for its ninth season and on tonight’s show the star search’s ninth season opens with auditions in New York City and Los Angeles.

For those who don’t know and are new to the show, America’s Got Talent is a talent show that features singers, dancers, magicians, comedians, and other performers of all ages competing for the advertised top prize of one million dollars.  Howard Stern, Heidi Klum, Mel B and Howie Mandel return as judges and Nick Cannon returns as host this season.  With the talent search open to acts of all ages, “America’s Got Talent” has brought the variety format back to the forefront of American culture by showcasing performers from across the country.

On tonight’s show kicks off its ninth season with the hottest acts from across the country competing for the chance to win the $1 million prize. The two-hour premiere features talent of all types and ages in auditions from New York City and Los Angeles.

We will be live blogging America’s Got Talent premiere. So make sure to come back to this spot and watch the show with us. Make sure to refresh often so you get the most current info! While you wait for the episode let us know what you think of the show!

Tonight’s Season 9 premiere of America’s Got Talent kicks off with an intro of the AGT judges: Howie Mandell, Howard Stern, Heidi Klum, Mel B, and the host Nick Cannon.

The first talent to take the stage is 9 year old Adrian Romoff. Although he is only 9 he is in 8th grade because he skipped five grades. He will be playing the piano for the AGT judges. Adrian gets a standing ovation form Howie and Heidi. Howard says that he was “utterly confused and he isn’t sure how much was Adrian and how much was track.” Heidi encourages him to play another song to showcase more of his talent. After his second song Howard Stern announces he has “cleared his confusion.” Mel says that “his act is not just about playing the piano, but talking to the audience. You had me at “hello.” Howie says, “England has Harry Potter, we have you.” It’s unanimous, the judges all vote “yes.”

The next talent to audition is a group of six siblings clog dancing. The judges announce that their performance is inspiring and they are voted in immediately. A breakdancing acrobatic dance team, and two retired circus performers also impress the AGT judges with their talents.

Comedians have a tough time getting on Americas Got Talent. 44 year old New Yorker Dan Naturman gives it a go though. He gives the AGT judges a skit on his thought on marriage and online dating. Naturman is able to make the judges laugh, and Howard Stern declares his “jokes are rock solid” and welcomes him to Americas Got Talent. All four judges vote “yes.”

The next talent to audition for Americas Got Talent is 49 year old Rokardy, doing a hand-balancing stunt. He uses a ladder and balances on his hands so high up off the stage that he is in the rafters. Howie is amazed by his performance and announces Rokardy is “phenomenal.” Heidi loved how “smooth and elegant he is.” Howard Stern says his act is “everything he signed on for and America is going to love him.” The judges are unanimous, they all vote “yes.”

The next performer to audition for AGT is singer Donnie Valentine, from Champagne, Illinois. His life long dream is to “tour the world and share the gift that God has given him.” The audience immediately begins booing, and the judges give him four exes. Howard jokes that it is “the fastest he has even seen anyone get four exes.”

Mike Greenstein is the next person to audition for Americas Got Talent. He’s 93 years old, and announces he is going to pull a vehicle with his teeth. He leads the judges outside into the streets of New York City. Mike takes a rope that is tied to a car and bites the end of it. The crowd begins cheering and the car begins slowly moving. He proceeds to drag it across a checkered finish line. Mike and the judges head back inside so that they can let him know whether he is in. Howie is amazed, he votes “”yes.” Howard Stern says “no,” he thinks that Mike needs a little more showmanship. Mel votes “yes,” and so does “Heidi.”

The next act is a singing group called “Acte II.” Everyone in the audience is shocked when the music begins and they begin belting out an opera song. Afterwards all four judges give the singers a standing ovation. Mal says, “Ladies! I was not expecting that, what a shocker. You made the hair on my arms stand up like this. That was a moment, and that was your moment.” Howard says, “Something interesting happened for me, you truly lifted my spirits. Great job.” The judges are unanimous and they all vote “yes.”

Up next is Dustin, and his sidekick. They put on a confusing karate skit, that is supposed to be funny. Heidi and Mel both hit the red buzzers immediately. Howie and and Howard laugh hysterically the entire time, and they both vote “yes.” Howard can’t believe they don’t get how hilarious Dustin’s skit really is, and he tries to explain that they are “classic Lampoons” and similar to the 3 Stooges. Howard decides to use the Golden Buzzer and save Dustin and move him forward to the next round.

Next is Nick and Rachel, a dance duo who call themselves “Blue Journey.” Nick confesses that she and Rachel met just four days ago, but they are happy with how their dance routine has worked out. When they are completed Howie gives them a standing ovation, and says “everything about it was unique.” Mel says, “that was very kind of dream like, you took eme on your journey. It was beautiful, so graceful to watch.” The judges all vote “yes” and Blue Journey is moving on to the next round.

Up next is a horrible mime. He immediately gets four exes from the judges. They try to explain why his act was terrible and he begins cursing them out and calls Howard Stern a moron. He rushes down to the judge’s table, and Howie calls for security. His hat and his wig fall off and they realize that it is Nick Cannon playing a prank on him.

The final act tonight is Jaycob Curlee, an 18 year old Alabama native. He grew up in foster care without his parents, until he was eight years old and was adopted by a family. His dream is to perform for a living, and tonight he is singing and playing his guitar. After his performance Jaycob receives a standing ovation and bursts into tears, Mel climbs up on stage and hugs him and comforts him. Heidi says she thinks Jaycob is great, and he “ has a beautiful voice.” Howard Stern confesses that he would invest his own money in him, and Mel compares him to Ed Sheeran. Howie says that Jaycob “sings with so much soul, and sounds wiser beyond his years.” He declares that “Americas Got Talent has adopted him and America loves him.” All four judges vote “yes,” Jaycob is moving on the next round of AGT.