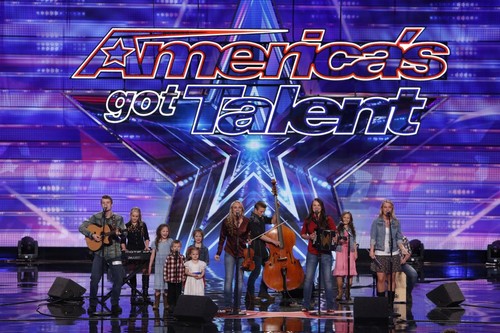 Tonight on NBC their hit reality talent show AMERICA’S GOT TALENT returns for a third episode of it’s ninth season where the auditions continue as the contestants continue to perform for the approval of the judges.

On last week’s episode, there were some great acts and some really weird acts. One of the most memorable acts was Julia Goodwin, an 15 year old girl. She sang “New York State of Mind” for the judges. They were all blown away by her performance and the four of them even gave her a standing ovation; she moved on to the next round.  Did you watch last week’s episode?  If you missed it we have a full and detailed recap, right here for you.

The first act to take the stage calls themselves the Kamikaze Fireflies, the couple Casey and Don perform a “bit of a variety show” at Renaissance Festivals. They have Nick Cannon join them on stage. Casey stands on a shopping cart and Don balances on top Nick’s shoulders while the couple juggles fire torches back and forth. Howie says that their act was “dangerous and funny.” Howard agrees that they “know how to work a crowd.” Mel says she “really thoroughly enjoyed it.” Heidi says she liked it as well, but she wants to see what they can do without Nick. The judges are unanimous, they all vote “yes” to move the Kamikaze Fireflies on to the next round.

Hannah and Savannah are both dancers that have been dancing together since they were eight years old. They take the AGT stage next to perform a routine together for the judges. They are dancing a contemporary jazz routine, “with a twist.” Once they start dancing it is revealed that there is actually a team of nearly a dozen dancers all dressed in costumes to blend in to their back drop. Heidi says that “it was a nice surprise,” she thought there was only two of them. Howie “loved the production,” and Howard agrees that the “choreography was brilliant.” Heidi, Mel, Howard, and Howie all vote “yes” for Savannah and Hannah’s dance act.

Up next is a professional twerker, she brings Nick Cannon on stage and teaches him and the audience how to twerk. Howard Stern even hops up on stage and demonstrates his twerking skills.

A 42 year old comedian named Jodi Miller takes the stage next and tries to woo the America’s Got Talent judges. Jodi performs a hilarious skit about cats and dogs and how women are like dogs and men are like cats. The judges give her a standing ovation when she is done. Heidi says that she “has never laughed this much at a comedian on stage.” Howard tells Jodi she has a “beautiful mind.” Mel agrees and states that Jodie is a “powerful, sexy comedian.” The judges are unanimous and they all vote “yes” to put Jodi through to the next round.

The next act to audition for the America Got Talent Judges is Bob Markworth, a 77 year old professional archer. Bob has his assistant Mayana hold a balloon in her mouth and he shoots the balloon clean through the balloon, next he shoots off her pants, and her cape, and a lollypop in her mouth. Heidi says “Bob is a good shot, and she liked the humor in their skit.” Howard commends how old he is, and says he looks like Mr. Magoo. Mel asks him if he ever has had an accident, and Bob reassures her he never misses. Howie, Howard, Mel, and Heidi all vote “yes” and put Bob Markworth through to the next round of AGT.

Anna Clendening has recently overcome her anxiety and depression and will be singing for the AGT judges today and playing her guitar. After her song is competed she bursts in to tears and Howie heads up on stage and comforts her. Mel says that she has an interesting voice, and it is “really different and emotional.” Heidi agrees that Anna is a “really great singer.” Mel, Heidi, Howie, and Howard all vote “yes.”
The next act to take the stage is John Vincent and his “trick pig” Mudslinger. First Mudslinger uses his snout to raise a flag on a flag pole. Then Mudslinger demonstrates his golf skills and his soccer skills. The AGT judges give John and his pig a standing ovation. Howie says that their act is “adorable and fun and a real crowd pleaser.” Mel agrees that she loved Mudslinger. Howard and Heidi agree that America is going to love their act. Heidi Klum heads up on stage and kisses Mudslinger and feeds him out of her mouth. All four judges vote “yes” to move Mudslinger on to the next round of AGT.
Diverse takes the stage next, they’re a two man boy band who works during the day as flight attendants. All four judges try to hit their buzzers on the guys. After a few minutes the crew runs out and plugs the buzzers back in. It turns out Mel had unplugged the buzzers so that she could charge her phone. Howard says it is a good thing Diverse is so young, they have time to quit singing and go back to college.

Aaron Fields takes the stage next dressed as a baby, he tells the judges he is going to sing for them. When he begins belting out notes the judges are shocked that he can actually sing. After he finishes he receives a standing ovation, and the judges all vote “yes” to put him through to the next round.

Andrey Moraru relocated from the Soviet Union and is now living in Los Angeles and will be performing a hand balancing act on AGT. When he is done with her performance the judges give him a standing ovation. Howie exclaims that Andrey is “fantastic” and he believes he could win the entire competition. Heidi agrees that Andrey is “beautiful to watch,” and Howard agrees that he is “perfection.” All four judges vote “yes” to move Andrey on to the next round.

Up next is “Smoothini: The Ghetto Houdini,” he is performing a few magic tricks for the judges. Mel, Heidi, Howie, and Howard are blown away by his magic tricks. Mel exclaims that he is “slick and she absolutely loved it.” Heidi agrees that “it was a treat.” Howard says he was the best act all day. All four judges vote “yes” and agree to put him through to the next round.

The final act tonight, Justin takes the stage and sings for the judges, and his father sits in the stands watching him perform for the first time. Howie states he is “proud of Justin and he isn’t even his son.” Mel and Heidi agree that Justin is sexy and they want to take him home with with them. The judges all vote “yes” to put Justin through to the next round.