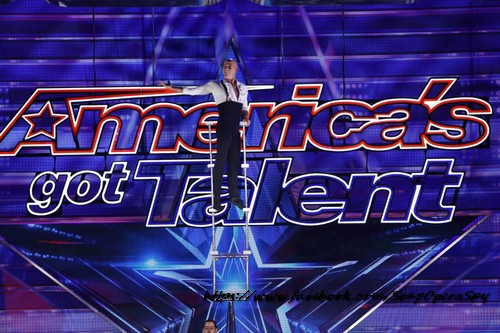 Tonight on NBC their hit reality talent show AMERICA’S GOT TALENT returns for a second episode of it’s ninth season where the audtions continue in New York and Los Angeles.

For those who don’t know and are new to the show, America’s Got Talent is a talent show that features singers, dancers, magicians, comedians, and other performers of all ages competing for the advertised top prize of one million dollars.  With the talent search open to acts of all ages, “America’s Got Talent” has brought the variety format back to the forefront of American culture by showcasing performers from across the country.

On last week’s episode, there were some great acts and some really weird acts. One of the most memorable acts was Jaycob Curlee, an 18 year old Alabama native. He grew up in foster care without his parents, until he was eight years old and was adopted by a family. His dream is to sing and he sang John Mayer’s ” Waiting on the World to Change.” Mel B gave him a big hug, Heidi Klum thought he sounded like Ed Sheeran, Howie wanted to adopt him and Howard said he would invest in him. Jaycob did an amazing job; all the judges loved him and put him through to the next round.  Did you watch last week’s episode?  If you missed it we have a full and detailed recap, right here for you.

Tonight’s episode of America’s Got Talent kicks off with a performance of “A Few Of My Favorite Things” by a family of twelve siblings. Mel B thinks their performance was great but they need to do more harmonies. Guest judge Heidi Klum thinks that “they are inspiring.” Howard Stern says they are “exactly what he is looking for.” All four judges vote “yes,” and give the family their tickets to the next round.

The next act to audition on America’s Got Talent is a team of magicians called David & Leeman. They take the AGT stage and have Howie join them. They press on Howie’s head and tell him that they are taking away his ability to read. They show him cards and tell him to read aloud, and just like David & Leeman announced, Howie is unable to read the simple words. The judges love their act, and love the fact that they made Howie look like an idiot, so they all vote the magicians in.

15 year old Julia Goodwin auditions in front of the America’s Got Talent judges next, and sings “New York State Of Mind” for them. The judges are blown away by her performance and all four of them give her a standing ovation. Mel B says, “Wow, your voice is so different and so unique. Wow! Loved it!” Howard says she has “tremendous talent and it was magnificent audition.” Howie says, “You listen to your voice and it comes out with such passion. If I have to define passion, it’s the sound of your voice.” The judges are unanimous, Julia is moving on to the next round of America’s Got Talent.

The next act to take the stage is a tap dancing duo, 17 year old Sean and 18 year old Luke. Heidi says, “the two of you are very talented. I really enjoyed it, especially your facial expressions.” Howard jokes that they aren’t much younger than Heidi’s boyfriend. Mel B is sure that the girls are going to go crazy for them. Howard says he “doesn’t know if it is something he needs to see again, because they seemed too ordinary. Howie, Mel, and Heidi all vote “yes.” However, Howard votes “no.” Sean and Luke are moving on to the next round of America’s Got Talent.

A Kung Fu Master Qi Fellong takes the stage next, unfortunately he doesn’t speak English, nor does his interpreter. Nick stakes the stage and helps the master explain what he is doing. First he uses his energy to stop a clock and then he slices a string with a dollar bill. Next he tells Nick to “kick him in the nuts” and he does. Howard and Heidi vote “no,” so unfortunately Kung Fu Master won’t be returning.

The next act to audition for America’s Got Talent is a team of motocross stunt men called Real Encounter. Nick and the judges follow the men outside where they have ramps set up. The team proceeds to do stunts on ramps, doing flips in the air reaching up to 75 ft . The judges give them a standing ovation. Heidi screams that the team is “bonkers.” The judges are unanimous, Real Encounter is moving on to the next round of AGT. The judges also push forward a jump-roping team, a basketball stunt team, and a pogo-stick stunt team.

Up next is a group of 8 year old triplets who will be performing “card throwing.” Phoenix shocks the audience and the judges when begins slicing celery with his cards and throwing them all the way up in to the balcony. The audience immediately begins cheering “Put Them Through.” Mel says the triplets are “just adorable.” Heidi says she “really really loved it and their presentation.” Howard thinks they are “inspirational.” The judges are unanimous, and all four of them vote “yes.”

A magician tries his luck next, and has Howard come up on stage and has him draw a card, and then place it back in the deck. He then turns around and reveals that the card is in his butt. He hands Howard a rubber glove to fish it out, but Howard refuses. It’s safe to say he isn’t going through to the next round.

A young musician named Miguel takes the stage next, to sing for the judges. The crowd goes wild before he even begins auditioning. The judges are blown away by Miguel. Howard declares he “has a great look and a great sound and he is going to go far in the competition.” Heidi announces her “heart just melted.” The judges are unanimous, Miguel is going through to the next round of America’s Got Talent.

33 year old Abigail takes the AGT stage next to perform an aerial act, during the day she is a teacher and she practices her aerial routines in her free time. She tells the judges that her act is an “example of her imagination coming to life.” The judges loved her performance, and Heidi dubbed it “truly original.” Howard says, “you have figured out a way to take something that we have seen a million times and animate it.” Abigail gets teary eyed and the judges are unanimous, they all vote “yes” and she is going on to the next round of America’s Got Talent.

John and Andrew audition for America’s Got Talent next, and perform a salsa dance for the judges. The judges are intrigued by two male dancing partners, although John stresses the fact that he is straight. The judges give John and Andrew a standing ovation after their dance. Howard says they are “terrific dancers and an exciting addition to the competition.” Mel confesses that they makes her “want to dance again.” Howie and Howard join John and Andrew on stage for salsa lessons. They return to their judge chairs breathless and vote “yes” to John and Andrew, they are moving on to the next round of America’s Got Talent.