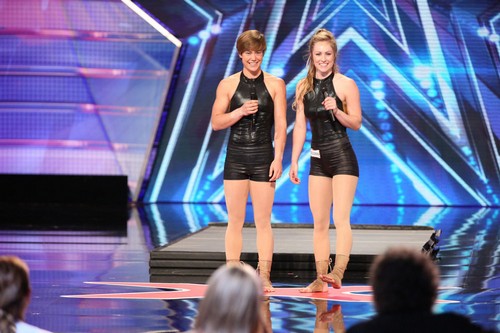 Tonight on NBC their hit reality talent show AMERICA’S GOT TALENT returns for a fourth episode in its ninth season where the auditions continue as the contestants continue to perform for the approval of the judges.

On last week’s episode, there were some great acts and some really weird acts. One of the most memorable acts was Anna Clendening who had recently overcome her anxiety and depression and sang for the AGT judges and played her guitar. After her song was completed she burst in to tears and Howie headed up on stage and comforted her. Mel said that she had an interesting voice, and it was “really different and emotional.” Did you watch the episode? If you missed it, we recapped it right here for you.

Tonight’s episode of America’s Got Talent kicks off with a singer named Emily West performing “Sea of Love” with her friend Jesse Hall on the guitar. Howard Stern and Howie both give Emily a standing ovation. Howard says her “voice is magnificent and it gives him chills all over the place.” Howie agrees that he loves her singing. Heidi says, “You know how to sing, there is no doubt about. Every word you sang you meant.” Mel B agrees that Emily is a great singer. The judges are unanimous, Emily is getting a ticket to the next round.

Up next is a group of dancers from a dance studio in New Jersey called “Dance With Me.” After their salsa routine, Mel says, “I’ve never seen salsa done like that.” She is impressed with the six year old girl out there that was keeping up with the routine perfectly. Howie says, “You know what it’s amazing that that’s from Colombia and that is where coffee comes from. It’s like salsa on caffeine.” Heidi agrees that their routine was amazing. Howard says “they know their audience and they know what they want to see.” The judges all vote “yes” and agree to move the dancers on to the next round.

A 42-year-old impressionist named Rachel Buterra takes the America’s Got Talent stage next. Howard Stern has had Rachel on his radio show before, so he won’t be able to vote on her act. Rachel delivers a hilarious rendition of the women on The View. Howie says, “everyone in the room was thoroughly enjoying it and amazed by how spot on the voices were.” Mel B agrees that she sounded just like the women on The View. Heidi says, “It’s amazing how much you crammed into 90 seconds. Great material.” Howard can’t vote, but Howie, Heidi, and Mel B all vote “yes” and agree to put Rachel through to the next round.

The next act to take the America’s Got Talent stage is a boy band called “Legaci.” They’ve been together for eight years now, and are all in their thirties. The judges are obviously surprised when the guys open their mouths and reveal that they can actually sing. Howie, Heidi, Mel B, and Howard all vote “yes” and agree to put Legaci through to the next round.

A member of the United States Army named Paul Ieti takes the AGT stage next to sing a song for the judges, he reveals he just got back from deployment in Afghanistan. After his performance Mel B. and Heidi and Howard all join Paul on stage to give him a huge. Howie says, “a sound came out of you that nobody expected. You are amazing!.” Heidi agrees, “you are super special, I think you are a super star.” Howard Stern agrees and says Paul is amazing. All four judges vote “yes” and put him through to the next round.

A 22-year-old hand balancer named Christian Stoinev auditions for the America’s Got Talent judges next. Mel, Howie, Howard, and Heidi all give Christian a standing ovation. Howard says, “You mentioned that you are a fifth generation performer, it’s almost like you are representing five generations before. The only question I have is why did you have to take your shirt off?” Heidi says, “You have shown us things today that we have never seen before, and I thought it was even more exciting when you took your shirt off.” Mel B. thanks him for taking off his jacket. All four judges vote “yes” and put Christian through to the next round.

Up next is Grace Ann Gregorio, an 11-year-old opera singer. Howard says, “you are a surprise and you get a big yes from me.” Heidi, Mel, and Howie agree and vote “yes” to put Grace through to the next round. Howard exclaims, “I love that kid!”

Maggie Lane, a personal trainer, takes the AGT stage next and will also be singing opera. In the middle of her song, she strips down to a bikini and the judges appear confused. When she is done Howie says, “You have perfect pitch.” Mel jokes, “There is no doubt about it you have an incredible body, your singing is really good too.” Heidi agrees, “She has a beautiful voice and a beautiful body. She’s a double whammy!” Howard points out that he is confused because he couldn’t focus on her singing when she took her clothes off. Howard, Heidi, Mel, and Howie all vote “yes” and decide to put Maggie through to the next round.

Dr. Benji McCallister, a 64-year-old keyboard specialist and singer takes the stage, he informs the judges he is a “10 Million Dollar Act.” Unfortunately, the judges disagree and they all hit their buzzers before he is done with their performance.

Josh, a 12-year-old comedian takes the AGT stage next, and plans to wow the judges with his jokes. Before he starts he confesses that he has never performed in front of an audience before. After his raunchy performance, Howie gives him a standing ovation. Mel confesses that she likes that he is 12 years old and he talks about naughty things. Howard says, “you actually did what a comedian is supposed to do, you did not lose the crowd.” Howie, Howard, Heidi, and Mel all vote “yes” to Josh and agree to put him through to the next round.

The final act to audition on America’s Got Talent tonight is an aerialist named Laura Daci who will be performing on a silk curtain. Mel B gives her a standing ovation when she is done and proclaims, “I did not want that to end.” Lauren reveals that she is struggling with an auto-immune deficiency and all of her hair fell out, so she has to wear a wig. Howie, Mel, Heidi, and Howard all vote “yes” and agree to put her through to the next round.