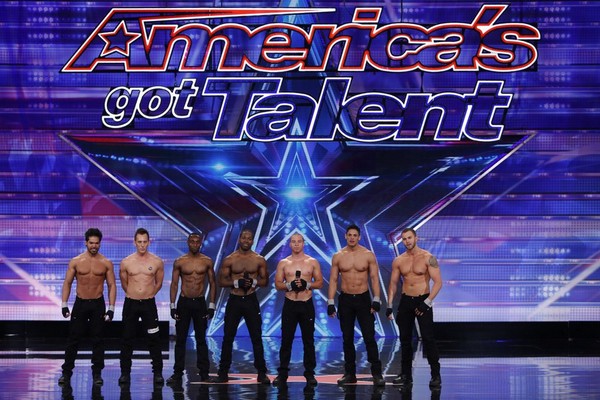 Tonight on NBC their hit reality talent show AMERICA’S GOT TALENT returns for a fifth episode in its ninth season where the auditions continue as the contestants continue to perform for the approval of the judges.

On last week’s episode, there were some great acts and some really weird acts. One of the most memorable acts was a member of the United States Army named Paul Leti who took the AGT stage and sang a song for the judges, he revealed that he just got back from deployment in Afghanistan. After his performance Mel B. and Heidi and Howard all joined Paul on stage to give him a hug. Did you watch the episode? If you missed it, we recapped it all right here for you.

Tonight’s episode of America’s Got Talent kicks off with The Psychic Divas of New York; they claim that they have never made a prediction that hasn’t come true. The two sisters decide to read Heidi first. They proclaim that Heidi has another hidden talent that she hasn’t revealed to anyone else, they claim Mel B. is getting another boob job, and Howie Mandel is going to open a car dealership. Howie, Mel, Heidi, and Howard all hit their buzzers.

Mike Super is the next person to audition for America’s Got Talent. He claims he is a “mystifier” not a magician. According to Mike, he has a supernatural spirit attached to him called “Desmond.” He calls Heidi up on stage with him to assist him. He has Heidi hold a glass pitcher and instruct the audience to rub their hands together to create energy for Desmond to feed off from. The pitcher is Heidi’s hand suddenly shatters. The judges are thrilled with Mike’s performance, they all vote “yes” and agree to put Mike through to the next round.

Up next is an aerial dance team, Valentine and Boby, married circus performers. Valentine balances a pole on his forehead; several feet up in the air Boby dangles from the pole by her neck and spins over and over. Howard proclaims, “this feels like danger. I love this kind of thing! I think you did a sensational job.” Mel B says, “I thought that was brilliantly dangerous, your act is exactly what we are looking for.” The AGT judges are unanimous, all four vote “yes” to put them through to the next round.

The next performer to audition on America’s Got Talent is Mara Justine, an eleven year old singer. After Mara’s rendition of “You’re going to Love Me” she receives a standing ovation from the judges. Howard says, “as a judge we all sit here and you know we wonder what is going to happen when we are going to have that “wow” moment.” Heidi agrees and adds that she thinks Mara is incredible. Howie says, “we know that this moment your life is never going to be the same.” The judges all vote “yes” to put Mara through to the next round.

Juan Carlos takes the AGT stage next on roller blades. He tells Howie he plans to make it to the end of the competition. He begins dancing his heart out on his roller blades to “These Boots Are Made For Walking.” Howard hits the buzzer before Juan Carlos is halfway done with his performance. Howie disagrees, he thinks that he will win over the hearts of America. Mel thinks that Juan Carlos is talented and entertaining, and there is something likable about him. Howie, Mel, and Heidi all vote “yes” and put Juan Carlos through to the next round despite Howard’s disapproval.

Two brothers, Emil and Dariel, take the AGT stage next to play their cellos for the judges. Heidi jokes that she thought they had two old-fashioned brothers that were going to play a classic, and they total shocked. Howard agrees that he loves the element of surprise, and has no idea they were Jimi Hendrix fans. The judges are unanimous and vote “yes” to put them through to next round of auditions.

The One Voice Children’s Choir, made up of a total of 100 kids takes the AGT stage next and performs their rendition of Ellie Goulding’s “Fire.” Howard is impressed, except for Mel B. She says that the first half of their audition was not good, but about halfway through they got it together and were on the same tune. Howard and Heidi vote “yes,” and Howie votes “no.” It’s up to Mel; she really doesn’t think they are a million dollar act but the audience chants “put them through,” so she caves and votes “yes” to put the choir through to the next round.

Arlo Pelegrin takes the AGT stage next, and proceeds to put five venomous tarantulas on his face. He plucks one off his face and lets Heidi hold it. Despite the fact that he broke a World Record, the judges decide not to put him through to the next round. They also vote “no” to the next man who fills his mouth with venomous cock roaches.

8-year-old Grennan James takes the stage next, and reveals he is a knife thrower. His Dad holds a balloon in his mouth and Brennan throws a knife through the balloon without harming him, then he proceeds to plant knives around his Dad’s entire body. Howie thinks it is totally wrong to encourage an eight year old to throw knives, but all four judges vote “yes,” and agree to put Grennan through to the next round.

Rock Hard Revue, a male revue show from Orlando, takes the AGT stage next to audition. As they perform, they strip, so Howie Mandell decides to take his shirt off as well.

74-year-old retired bartender and singer Frank Demetri takes the AGT stage next, he has been singing most of his life, however he never really had the confidence to pursue his dreams until now. The judges are blown away by Frank’s performance; he confesses that he always had a stuttering problem, so he was scared to pursue his dream of being a singer when he was younger. Howie tells him it would have been such a loss for the world if he never performed. Mel B chimes in that “his voice is so smooth and so sexy, she thinks she is in love with him.” Heidi adds that he is “so humble and so nice.” The judges all vote “yes” and agree to put Frank through to the next round.