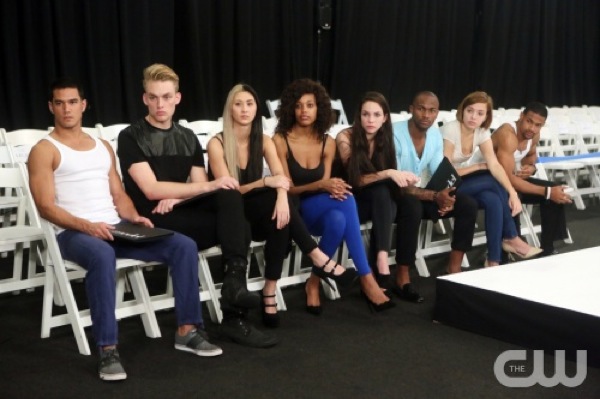 Tonight on CW Tyra Bank’s America’s Next Top Model returns with an all new Friday October 17, cycle 21 episode 9 called, “The Guy Who Wows Betsey Johnson.” On tonight’s episode Miss J gives some select models a private runway session to prepare them for Fashion Week where they are challenged to book fashion shows with different designers, including Betsey Johnson. Later, a hair product photo shoot leads to harsh words and flaring tempers.

On the last episode models teamed up to for a photo shoot challenge with judge Kelly Cutrone resulting in two models recognizing the need to put their personal relationship on hold. The models then discovered their common ancestry links when heritage came into play as the styling concept for a futuristic sci-fi photo shoot that featured a special guest posing as a robot. Did you watch the last episode? If you missed it, we have a full and detailed recap right here for you.

On tonight’s episode, Miss J offers select models a private runway session in order to give them a leg up on Style Fashion Week, where the models are challenged to book fashion shows with different designers, including Betsy Johnson. Models pair up for a hair product photo shoot that results in harsh words and flaring tempers.

And then they were eight! Matt was sent home on last week’s episode and there’s a few people (by few I actually mean most of them) at the house that would have preferred it if Mirjana was the one that got the boot. She’s argumentative and frankly everyone is tired of her attitude. The only person still sticking up for her is Denzel but even he admits defending Mirjana is starting to get tiresome. It’s like it never ends with her.

So, no, she’s not winning over any friends. And you kind of need friends in order to still partake in Tyra’s surprises especially when you haven’t won best photo.

Lennox won best photo and she chose Raella and Shei to take part in whatever her rewards was this week. However she left most of her fellow contestants jealous when they realized she and the other girls would be getting private session with Miss Jay. It seems Miss Jay’s mission this week was to come in and instill so much needed confidence. Yet Lennox couldn’t appreciate this gift she was being given because she kept running into the same problem she always has – not being comfortably with her own sexuality.

Sexy and sultry are just words not included in her personal dictionary. Hence she easily gave up when Miss Jay was trying to teach the ladies about the booty tooch. And Tyra has already had to talk to her about that!

Later the contestants were given their challenge. After they received critique from Betsy Johnson, of all people, on their walks – they were released into the wild so to speak. Meaning they had to go and audition their new walks for several fashion designers in hopes of getting picked to do a runway show. It’s Fashion week and there’s no better time to get exposure than on the runway.

And for the most part everyone received great feedback. But in the end, Denzel wasn’t chosen by anyone. Even when it came down to a close call between him and Keith – the designer went with Keith. He said the clothes were less snug on the other model. Which if Denzel was being honest with himself – isn’t the first time he heard something familiar to that.

The judges have been telling him at panel (for a while now) that he needed to slim down. He’s simply too muscular and so clothes off the clothes off the rack aren’t going to fit him as well as do the other guys. It’s simply going to look too tight and that won’t sell the clothes.

By the next day, the models had a rocky start to their photo-shoot. Denzel had forgotten to wake up Mirjana that morning so she was mad at him. And that left him worst for wear. It was like their fight had completely drained him of all his energy because when they did arrive on set – he looked sleepy before the photos and during the photos.

This week the models were paired up. And Denzel was paired with Shei who also happened to be the challenge winner. Now the two of them have been paired together before so eventually there’s a certain comradery that’s just naturally going to be there. But Mirjana didn’t like seeing them together. She felt Shei was being too flirtatious and so she got jealousy. Although that doesn’t really make a lot of sense seeing as Mirjana has been relationship hopping between her fellow contestants and her boyfriend back home all throughout this cycle.

Then when it was Mirjana’s turn she ended up being paired with Keith who truthfully doesn’t like her. All they had to do was maintain their positions for a few photos. She had to stay still and let him pick her up. And he had to keep her up.

But then she started to fall and because nothing is ever her fault – she took her out anger on Keith. She blamed him for dropping her and yelled at him right there on set. Will was sitting on the sidelines and he told Keith to stand up for himself.

Mirjana didn’t like that so she created an even bigger scene on set!

Another person that faltered on set was Lennox. She kept messing up her hair and they were supposed to be promoting a hair product. So she was a no go and when panel rolled around the first criticism she received was that they had come to expect more from her.

She had given up during the photo-shoot and Miss Jay told his fellow judges that she had did the same during his session with her. She refused to twerk and they were only having fun. It’s not like she was being judged on her twerking ability. But that behavior served as a reminder for Tyra. Lennox isn’t capable of pushing herself.

Though Tyra’s score isn’t the only one that got to decide whether or not a model gets to stay an extra week. So in the end when the winner (Will) was chosen and the bottom two came down to Lennox and Denzel.
Lennox received her lowest social media score yet and still she was chosen over Denzel. And so Denzel was sent packing. Or was he?
Tyra is bringing back one former contestant prior to the models’ trip to Korea!

She had invited back a slew of people but only one girl and guy was chosen based off of their social media scores. And there’s not enough tickets to take the both of them. The competition (of social media scores) to see who won a second chance is between Chantelle and Ben!
Tune in next week to see who get a ticket to Korea!