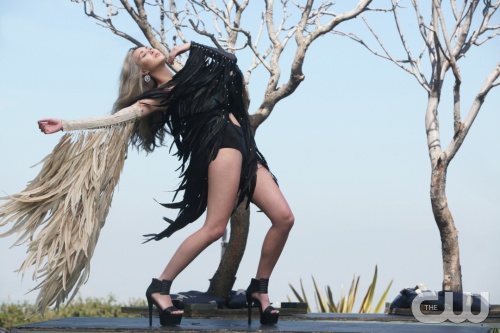 Tonight on CW Tyra Bank’s America’s Next Top Model returns with an all new Friday October 24, cycle 21 episode 10 called, “The Girl with the Blood Curdling Scream.” On tonight’s episode an eliminated model is brought back into the competition after fans cast votes via social media. Later, a challenge in a slaughterhouse; and an HIV/AIDS awareness photo shoot.

On the last episode Miss J offered select models a private runway session in order to give them a leg up on Style Fashion Week, where the models were challenged to book fashion showed with different designers, including Betsy Johnson. Models paired up for a hair product photo shoot that results in harsh words and flaring tempers. Did you watch the last episode? If you missed it, we have a full and detailed recap right here for you.

On tonight’s episode, a model is brought back into the competition after fans cast their vote via social media. A challenge to keep their composure in the dark at a former slaughterhouse with a dark and gruesome history gives models the chance to win a special treat. Later, at a “no glove, no love”-themed fashion shoot that focuses on awareness of HIV/Aids, Tyra Banks acts as makeup artist to the models donning a variety of ornate gloves.

Apparently, the contestants shouldn’t have gotten all that excited about one of their former friends possibly returning. Because once Chantelle won the comeback competition from last week on tonight’s new episode of ANTM – Tyra then informed the remaining models there are only seven tickets intended for them on the plane ride heading to Korea. And, sadly, there’s now eight contestants…

The initial hype surrounding the comeback competition was a complete setup!

So no wonder many of the other models are now feeling resentful about Chantelle’s return. She might actually rob someone off a chance to go to South Korea. And some of them have been around for weeks honing their craft while Chantelle on the other hand went home during week 4.

This type of mindset isn’t exactly fair to Chantelle who in all honesty didn’t know about the rules behind her being allowed back into the competition but she’s still getting the blame. And, thankfully, Chantelle for her part is able to roll with the punches. She says growing up with her skin condition has taught her how to deal in situations like she’s in at the moment and so she knows not to let other people make her forget why she’s in the competition.

That’s why it’s no surprise that she soon won a challenge that was about keeping up your composure. The challenge required the models to go through a haunted house. Yet along the way they were going to be randomly stopped for a photo shoot. So they had to stay in modelling mode.

Chantelle won that challenge by having the best photo, but afterwards some of that famous composure of hers started to wane.

And it all happened back at the house. As part of his Tyra treat, Will got a personal visit from his parents. So he couldn’t help himself. He was crying and just basically being happy about seeing some familiar faces from home.

Everyone was nice to his parents. Even Mirjana who’s undergone a personality transplant recently. She’s been nice to all of her housemates and its simply weird coming from her. However she’s not behind Chantelle’s loss of confidence. No, the shocker is that Lenox was the one that began to tell the rest of them that Chantelle secretly wanted to go home.

Lenox and Chantelle have been talking and Chantelle admitted that she was having fun while being back home. Lenox took that to mean that she missed home and so she told Mirjana and Shei about what Chantelle said. And soon the three of them were all openly talking about why Chantelle should have just stayed home if she missed it so much.

Chantelle overheard some of their bantering and it was a blow to her. Sure, she likes to keep things close to her chest but she didn’t think the others would have turned on her like that!

Later at the house, she denied in front of everyone that she ever said she wanted to go home. And secretly she thinks that it was something Lenox came up with in order to fit her own agenda.

As for the photoshoot that was supposed to decide who got to go to South Korea – that was a bit of bust for mostly everyone.

The models that were expected to do well were lackluster and those who were considered sleepy on set still ended up with a great picture.

The winning photo went to Chantelle. Though she was warned about her lack of sincerity. She tends to come off as cold in front of the judges and so they warned her about letting down some of her old walls. As if that can happen when she’s surrounded by other models that were hoping she would be sent home!

As for who did go home, Mirjana’s number finally came up. She lost some of her drive after Denzel left so now she has to return home to her boyfriend!

Wonder what he’ll say when he sees the footage!