America’s Next Top Model Recap – Chantelle Eliminated: Cycle 21 Episode 13 “The Girl Who Gets Caught in a Lie” 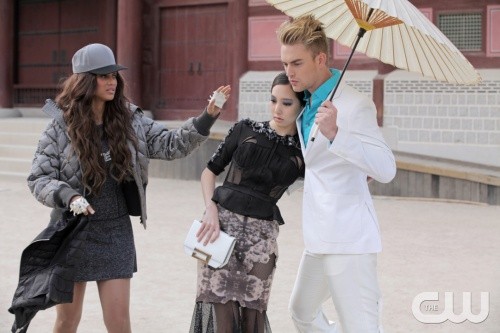 Tonight on CW Tyra Bank’s America’s Next Top Model continues with an all new Friday November 14, cycle 21 episode 13 called, “The Girl Who Gets Caught in a Lie.” On tonight’s episode the models race around Seoul as part of a timed challenge, during which one model gets caught in a lie. Later, a contestant offends a photo consultant after she confronts him for calling her a panda bear. Kpop singer Jay Park appears.

On the last episode the seven remaining models packed their bags for Seoul, Korea and found themselves challenged to a group dance photo shoot judged by Korean pop sensation BtoB. However, one model found that a bad habit limits the potential for success during a photo shoot with a luxury brand; a problem that did not go unnoticed by Tyra Banks and the judges. Did you watch the last episode? If you missed it, we have a full and detailed recap right here for you.

On tonight’s episode as per the CW synopsis, “the models race to various locations around Seoul for a timed challenge, where one finds herself isolated from the rest of the group after getting caught in a lie. Later, a model offends photo consultant Yu Tsai after she confronts him for calling her a panda bear during a head-to-toe photo shoot with Jinny Kim shoes and accessories. Kpop singer and actor Jay Park guest stars.”

The models weren’t in a good place after the panel from last week. Raelia was told to go home and no one felt she should have been tossed aside in favor of keeping someone like Chantelle around for another week. To be frank, Chantelle is contentious and no one likes her or is prepared to give her a fair shot in the house. So even as she is later trying to be a better housemate/friend – she’s not given the chance to actually prove she can become a better person and not the stuck up control freak they all think she is.

Hence, things have been tense amongst the models. Keith so far is the only one willing to talk to Chantelle without any snide comments. He says he wants to keep up the brotherly relationship he has with her (especially as she’s kind of become an outcast), but Chantelle doesn’t really view him as the surrogate brother he thinks he is. She likes him as in “likes” him. And everyone can see it.

It’s only recently that Keith has slowly been coming to the conclusion that Chantelle might want more from him but he doesn’t have a lot of time to digest before he was thrown into working with her.

Later when the models were given their challenge, they were told to all partner up. And so Chantelle and Keith ended up being paired together for their go-sees. Truthfully, he was the only one that could work with her so he basically got stuck her. However the two of them managed to go to all five of their go-sees when no one else could.

Plus Keith was the winner of the competition because he booked 4 out of the five shows. So he got a lot from his partnership. And Chantelle on the other hand merely booked one go-see but then again that was mostly because of her look and her attitude. Seriously, who goes to meeting with a designer and never takes off their sunglasses?

Yet, while some of the models have been given an added confidence boast seeing as they booked designers – there’s someone like Adam who didn’t book any of his go-sees. And when he’s down or depressed he finds it fairly easily to start losing track of how many drinks he’s had. So his friends finally sat him down.

Keith and Will warned Adam about his drinking. He’s come too far in competition to lose out over something so trivial!

And thankfully Adam to their advice to heart. He showed up at their next photo-shoot completely sober. He wasn’t relaxed as he normally is but he did feel proud of himself. Also it didn’t hurt to have Tyra surprise them onset and see for herself that Adam had gotten his drinking back under control.

Though, not everyone had a good day onset. Lenox had yet another off week. And Chantelle had a minor episode behind the scenes. She was telling her makeup artist that she was going to set Yu Tsai straight about his comments and the rumor worked its way back to Yu Tsai. So after she had finished her photos for that day, Yu Tsai had asked her if everything was good between him. And brought up the time he called her “panda”.

Yu Tsai hadn’t meant anything bad when he said it and Chantelle admits that she knows there was nothing malicious behind it – she’s just fighting him over the word based on principle. She told him she didn’t want other people to get the wrong idea. If she allowed him to refer to her as a panda than what’s to stop people from calling her cow or zebra.

So eventually Yu Tsai and Chantelle got into an argument about the nickname Panda and by the end of it they were both claiming to be good with each other but Yu Tsai had confessed to the cameras that he didn’t see Chantelle making it in the modeling world. He said her attitude was going to cause her problems.

And Yu Tsai does have a point. Chantelle’s attitude does get her into trouble and that’s why when she had confided a secret to Shei – Shei then turned around and backstabbed her. Chantelle had accidentally forgotten that she and Shei aren’t friends! In fact, Shei had stopped liking Chantelle long time ago because of the infamous attitude. So Shei (after Chantelle had confided in her) told Keith that

Chantelle had told her that she had hooked up with him. And Keith called bull**** on the story. He said Chantelle isn’t even his type. She’s too young for him and they were only ever friends.

So Keith confronted Chantelle over what she’s been saying and he told her to stop lying about him. Chantelle had felt so hurt about losing both Keith and her supposed relationship with Shei that she distanced herself away from the group.

But later at panel, Chantelle did at least get some good news. She was told that she didn’t worry to about her living situation anymore because she was being sent home. Apparently she had the worst photo of the week and her social media score wasn’t as strong as it used to be. Oh well.