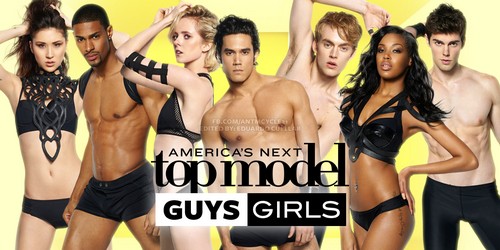 Tonight on the CW Tyra Bank’s reality show AMERICA’S NEXT TOP MODEL returns with a new season and it’s premiere episode called, “The Boyz R Back.” On tonight’s show season 21 begins with 31 guys and girls competing to see who can take the best selfie. The numbers are reduced when the men and women square-off at a bowling alley.

For those of you not familiar with the show, the show is hosted by Tyra Banks, the second “Guys and Girls” edition will feature seven men and seven women living under one roof and battling it out to earn the prestigious title of AMERICA’S NEXT TOP MODEL. The panel of judges, which includes Banks, fashion public relations maven Kelly Cutrone and the viewing public, will be joined by beloved runway coach J. Alexander, making his return to the show, to determine who stays and who goes in the competition. Also joining Cycle 21 as photo shoot creative consultant is the sought-after photographer Yu Tsai, who has worked with some of the entertainment industry’s most talented models, actors and musicians.

On tonight’s show THE GIRLS… AND GUYS ARE BACK – Cycle 21 kicks off with girls AND guys back in the competition to take home the title of America’s Next Top Model. 31 potential contestants rock the runway to see who can take the best selfie. The semi-finalists square off in a bowling alley to reveal who makes the first cut. Host Tyra Banks, welcomes Miss J back to the judging panel, along with fashion public relations maven Kelly Cutrone

Its another season of ANTM and I am super stoked.  ANTM is one of my favorite reality shows.  The show opens with us meeting the guys and gals competing this season.  Cory from season 20 meets the new models and tells them they are going to be stomping in a fashion show already.  At the start of the show Tyra comes down on a swing from the sky and the contestants are impressed.  Cory and Tyra announce that there is someone going to stomp on the runway and out comes Miss J.  Miss J is back this season.  Great new, Miss J really added to the show in the previous seasons when he was on.  Tyra has finally realized that the show was really missing Miss J.

The models will have to rock the runway with their own hashtag and stop at the end and take a selfie. Kari walks down with her partner first and she thinks the model she is walking with is hot.

Lenox is so excited since she is from Georgia.  Will hits the runway he came out last year to his family and being in this competition lets him breath.  Denzel is all excited because he thinks he looks fabulous.

Emily and Brandon are in sync and look great walking.

Chantalle has virago but she still has lots of confidence.  Adam is roaring on the runway not sure Miss J is crazy about what he is doing.

The show ends, Cory congratulates them on their first show.  Cory tells them now they have to personalize their selfie and this is going to be the first photo the judges see so it is super important.

On the panel are Miss J, Kelly Cutrone and Tyra.  There are 31 contestants and they are going to cut if down to 22.  The first model they meet is Adam – he tells them he is a legend at his fraternity and a top party person.  When he leaves Kelly says she hopes her daughter never comes home with a man like him.

Chantelle is next – and apparently Tyra found her on social media.  Chantelle speaks to them about bullying because of her virago.  Tyra tells her regardless of her affliction Tyra will not be easy on her.  They look at her selfie and Kelly tells her she could do better.

Ben is next and he says he is a quadruple threat.  He is a singer, model, actor and dancer.  Ben tells Tyra that he checked Tyra out and Kelly tells him off.

Over with the models Romeo tells the other models about the occult.

Will comes out and he is wearing high heels he is a dance teacher and he teaches Tyra to twerk.

Back to the evaluations.

Josh  who use to be an athlete – he had to stop because he has a disease where he turns yellow and found out he has a problem with his liver.  He thinks being a model is what he should do.

Daniel is back he was on last cycle.  He is determined but Tyra feels his energy is not all there.

Romeo is back with for his evaluation. Tyra want to know if his Wiccan practices will interfere with the competition.

Keith is compared to Tyson Beckford, he is gorgeous and all the girls are flocking to him.

Back with the models the drama already started Romeo told Daniel he does not like him and wants him to stay away with him.  The models are all getting to know each other and a blond girl walks in and introduces herself as Jaime Rae and she looks like a barbie.  Her plane got in late and she missed the intro.

The models head to Lucky Strike – Miss J has a top model bowling ball and once the model bowls if they see a happy face with a YAY they stay.  If they don’t they go home.

The game is not over yet – there is one more week to make it to finals.  They are only choosing 14 finalists.