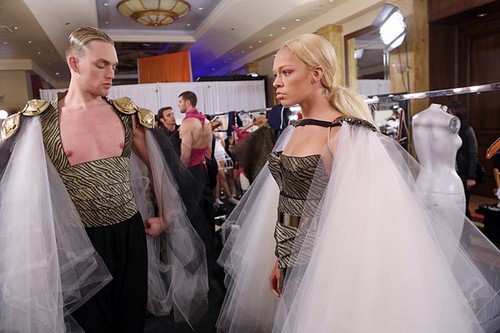 Tonight on CW Tyra Bank’s America’s Next Top Model returns with an all new Monday September 15, Cycle 21 episode 5 called, “The Girl Who Starts a Fight.”  On tonight’s episode Tyra teaches the models the three steps involved in making love to the camera to prepare them for a sexy black widow-themed photo shoot. Later, unexpected chemistry occurs between two models just before a challenge on stilts; and one model breaks a major house rule during a night of partying.

On last week’s episode a love triangle in the house caused some models to under perform at an optical illusion photo shoot. Later, during makeover day, one model unveiled a never-before-seen look, while another suffered a breakdown.  At the end of the episode Chantelle was sent home.  Did you watch last week’s episode?  If you missed it we have a full and detailed recap, right here for you.

On tonight’s episode Tyra teaches the models the three steps involved in making love to the camera to prep them for a sexy black widow-themed photo shoot. An unexpected chemistry occurs between two models just before a hair-raising challenge on stilts. Later, a night of partying in the house quickly turns dramatic when one of the models breaks a major house rule.

On tonight’s episode of America’s Next Top Model, the contestants have to find and bring out their inner sexiness. They all had an exercise with Tyra about being sexy and for the most part everyone tried to their best. But Lennox simply gave up beforehand. When it was her time to stand in front of a mirror – she faltered. Then she refused to take the challenge seriously which Tyra didn’t really appreciate. In case anyone forgot –Tyra was giving up her own time in order to teach.

And also the models have to be more than just their pictures. Their attitudes comes in to play on whether or not they get booked so if Lennox had displayed that type of behavior with anyone else she might have lost out on a job. This is a competition after all and they can only prepare these guys for the modeling world but they can’t make up for anyone’s lack of self-confidence.

So Lennox has to get it together. And for someone like Romeo, he needs to realize that he’s just starting out and is still technically a “nobody”. Because so far he has a lot of attitude and he will be judged for that. Later at their spooky sexy photo-shoot, the featured director Franco Lacosta came into the tent during their make-up and Romeo was the only one that didn’t come out to meet him. That was rude and so Yu Tsai and Franco were left with no other choice than to take note of it.

He was able to make up for his blunder during his chance in front of the camera but his arrogance really needs to be checked. He thinks he’s the best and he likes to pass judgment on everyone else. Although there was a few hours at the house that Romeo was almost normal. It was his birthday so he got drunk and he, for a short time, a likeable person.

Then he go wild and was playfully fooling around with everyone when out of nowhere his good humor was gone and “the jerk” returned!

He got into Adams face and proceeded to insult him. Then he tried to push Adam into fighting him and when that didn’t work – Romeo head-butted him. Thankfully the rest of the contestants stepped in before things could get out of hand, but violence was done. And Romeo wasn’t even apologetic when he did sober up.

He still thought he was better than Adam and only cared to show remorse when his actions caused him to be eliminated from the competition. Umm too little too late!

The next challenge for the models this week was the runway. However they had to walk the runway on stilts. Now there was a fall (Raelia) and few close calls (Ben), but overall a lot of people made up for the lack of passion in their earlier photos by maintaining their composure they were able to express on the runway. Ben was able to win the challenge despite almost falling.

So if he’s lucky – his strut will keep him safe this week. He had failed in the prior challenge and Tyra isn’t being as lenient as she used to be. When it came time for Lennox to meet with the panel – she didn’t even have a win like Ben to fall back on. Hence the thing Tyra remembered the most was Lennox giving up without trying.

The other judges attempted to be kind to her for her shoot and they gave her a “7” each. But Tyra gave her “1” seeing as she couldn’t actually give Lennox a “0”.

The top three this week in the competition were Will, Raelia, and Keith. Their combined scores were the highest. Meanwhile the bottom two were Adam and Lennox. Tyra was about to choose Adam over Lennox when she decided to grant the younger woman a reprieve. Lennox is allowed to stay an extra week because Romeo was disqualified.

However she will only have five frames to get the perfect shot – if she fails – she goes home!