America’s Next Top Model Detailed Recap: Cycle 21 Episode 4 “The Guy Who Gets a Beard Weave” 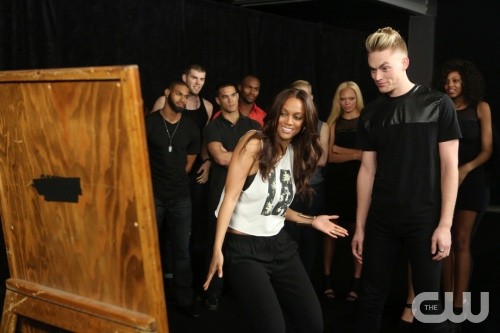 Tonight on the CW Tyra Bank’s reality show AMERICA’S NEXT TOP MODEL returns with the fourth episode of it’s 21st cycle called, “The Guy Who Gets a Beard Weave.” On tonight’s show it is everyone’s favorite episode, Makeover Week.  Meanwhile a love triangle in the house causes some models to under perform at an optical illusion photo shoot.

On the last episode, the final 14 contestants moved into their new home, just in time for tempers to flare and relationships to ignite. Models competed in a revealing runway challenge where the wardrobe consists only of silly string. Host Tyra Banks gave a behind-the-scenes look on how this cycle’s rain-themed intro was put together. Did you watch the last episode? We recapped it all right here for you.

On tonight’s show a love triangle in the house causes some models to under perform at an optical illusion photo shoot. Later, during makeover day, one model unveils a never-before-seen look, while another suffers a breakdown.

RECAP:  We’re in the fourth episode of this competition and Romeo is already considering voodoo dolls. He had looked around one day and saw that his fellow contestants weren’t taking this competition as serious as he is – as in they were relaxing and enjoying themselves at the house – so somehow that made him want to make voodoo dolls for them. Luckily, though, he was still missing a few important ingredients by time their first photo-shoot came around.

The shoot was hard enough on its own that it didn’t even need any extra voodoo power. The shoot itself was all about creating an optical illusion so it tested some of the participants. They were put in weird angles on the floor and then had to find a way to make that editorial. Hence some of them struggled like Chantelle and Kari during their turns while others (namely Denzel) completely lost it. Denzel couldn’t stand Yu Tsai’s directions. And at one point – he had begun to curse the other man under his breath on set.

Yu Tsai didn’t seem offended, but that really wasn’t proper etiquette on Denzel’s part. He should have kept his cool so his actions might come back to haunt him.
Later in the day, the models learned they were going to get their makeovers and that idea had freaked some of them out. And we all know what they fear the most – their hair getting cut. Although the ones that were in fact chosen to have a haircut – weren’t the same people kicking up a fuss from before. No, the true overly dramatic reaction came from Kari.

Tyra had ordered extensions and full on platinum blonde job for her. However Kari began to cry way before she could see the end result. She had started tearing up while the extensions were still being put in. Then when she did see her herself again after completion – she cried again.
Though that time she had a reason. Her makeover doesn’t fit her in real everyday life. It washes her out in person and only gives her that fierceness Tyra had predicted when she’s onset.

And with everything else going – the romantic entanglements has made the living situation at home a bit awkward. Matthew had gotten jealous when his former crush Mirjana started to flirt with Denzel and he had attributed his off day onset to their blatant behavior. Yet things changed for him after the makeovers. For instance, he suddenly thought Will was even prettier than before and all Will got for his makeover was a bit of hair buzzed off on the sides.

The two guys became friendly and soon one thing led to another – they kissed. But then everyone else in the house wanted to know what that meant. Is Matt gay? Is he bisexual? And none of that matters because Mat is simply figuring things out for himself and wanted the rest of them to leave him alone in the meantime. So Will sort of had to come to his defense and say leave him alone. Will knows what it’s like to have people hound you for answers they feel they need.

Anyways why was Mirjana one of the people looking for answers? She claimed to pretty much everyone that she had moved on!

Panel, thankfully, came around and it came time for the judges to make a decision about who could stay and who had to leave. And this week’s top photo was Ben’s. He was followed closely behind by Lennox who came in second and Will who came in third.

But that’s not important. The top of three always know their safe the second someone as strict as Yu Tsai praises them. It’s who’s in the bottom two that matters and they are Chantelle and Kari. Both of them had the weakest photos this week and though Kari is currently rocking the alien look – the judges and social media equally thought she should stay.

It was Chantelle with her unique look that was sent home. So, truly, it’s a good thing no one cut her hair – she was the one that had feared it the most.