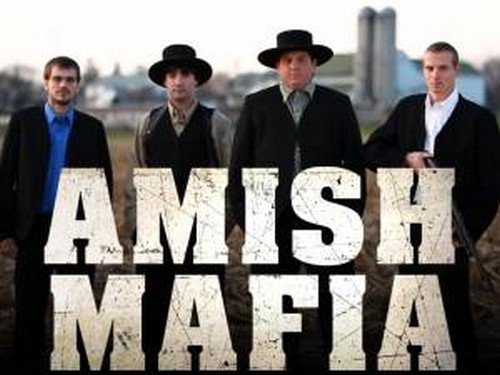 Tonight on the Discovery Channel AMISH MAFIA continues with a new episode called, “Joining the Flock” . In this episode Levi gets closer to marrying Esther. John gathers new information to use against Levi. Wayne gets revenge on Ruck just as the Church begins to question Wayne. Merlin learns a new skill and looks for the most feared Amish man in the world: the Bear. Amish Mafia provides a first-ever look at the men who protect and maintain peace and order within the Amish community in Lancaster.

In last week’s episode changes were forced upon Levi; John fed information to the police; and Merlin added an ally.  Did you tune in for the last episode? If not we recapped it right here for you so it’s easy to catch up!

The show is about a side of Amish society that exists under the radar, and the Amish church denies the group’s existence. Amish Mafia provides eyewitness accounts of the incidents, misdeeds and wrongdoings within the Amish community, as well as a rare look at Levi and his team members who work together to maintain harmony. To protect participants and their family members, some identifying information and property have been changed. Some scenes have been re-enacted.

Tonight’s episode is going to be filled with drama and you won’t want to miss it, so be sure to tune in for our live coverage of the show tonight at 9 PM EST! While you wait for our recap hit the comments and let us know what you think of “Amish Mafia” season 3.

Levi visits an acquaintance from the past in hopes he can help convince the bishop to let him get married. When the man hesitates, Levi reminds him of some very incriminating pictures he has of him from years ago. Levi tries to use this as leverage to get help from someone who may be able to help sway the bishop. He gets his wish when he receives confirmation from the bishop. He gets dressed up and goes to see Esther.

Merlin claims he received a very clear important message from God. He wants to learn Amish witchcraft. He is encouraged not to participate in such dark activities, but says this is his calling and he will sacrifice. He is hoping to use his new power against Wayne. He says he is feeling the Lord in him and has a new strength. He feels he now has the power to heal.

Levi and John argue because John feels like Levi is not respecting him and is still mad about making him look foolish at the jobsite. Later,Esther and Levi have dinner with her family. At the dinner table discussing Esther and Levi’s engagement, Levi is asked by Esther’s mother if he will give John more work. He begrudgingly obliges. John tells the cameras that the more work he gets from Levi, the more information he’ll have on him. He sticks to his word and divulges more information about Levi to the authorities. John later finds out that Castline has not been honest and all the information he’s been providing is not going towards getting him a lighter sentcece.

Wayne is out for revenge. Still upset over Ruck driving his truck into a pond, he hijacks his trailer and loads it with pigs. He continues on his vengeful streak when he destroys a man’s video game and candy collections for charging kids to use them. He takes a sledgehammer inside and begins destroying the place.

Flip and Caleb are partying it up in a limo with a large group. They think it is the best way to party since the cops cannot come and shut them down. In this case, however, someone else shut them down..the same guys that had their shed burnt down and they are out for revenge. They order everyone out and yell, “you burn our shed, we burn your limo.” They set it on fire. They say the job was done compliments of Bear. The next day, Flip calls Levi to let him know what happened and he tells him to send Caleb back to Lancaster.

Merlin asks Andrew for help and drops some private information on him. He shares that the woman Wayne is trying to convert is actually his girlfriend. Andrew seems hesitant to get involved, but Merlin reminds him of how he has helped him. Andrew does tell the bishop what he’s heard and the bishop approaches Wayne about the issue. Wayne questions who told on him, but the bishop does not tell him. He does not admit anything, and is told that while the church has faith in him. They will have to keep an eye on him. If he is found to be lying, he will have Amish Aid taken away from him. Wayne admits, he cannot allow that to happen.

Merlin decides to take matters into his own hands and seeks out Bear after heading to Indiana. After saying just the right thing, he gains entry and seems to be sucessful in tracking down Bear.

Levi plans a wine tasting, and carefully sets a lookout to alert him to authorities coming. Castline sees the lookout start a fire to warn Levi. Castline pays a visit and gives a stern warning.

Join us next week to see what Levi and the others are up to next.